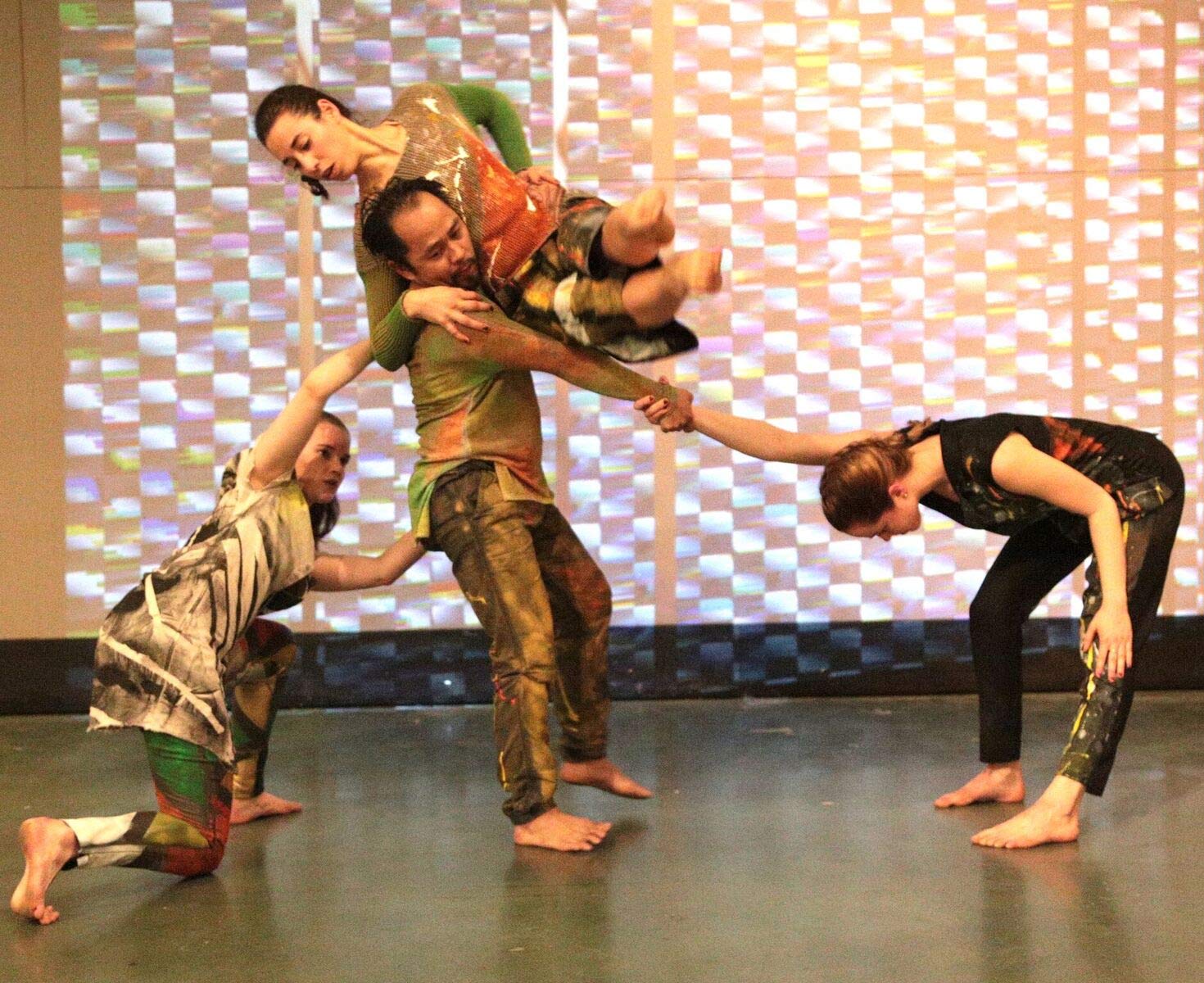 City College Center for the Arts

in the World Premiere of

Liable to Change utilizes movement, architecture, sound, light and interactive technologies and filters it all through the Cynefin Framework to inform the piece by delving into states of simplicity, complicatedness, complexity, chaos, and disorder. Investigating systems of order and logic exemplified in the writings of DaVinci, Kepler, and Plato and the concept of “the golden mean” as well as the Fibonacci sequence are presented within the movement, architecture, and visual elements of the work illustrating the dichotomy of chaos and logic.

Zullo/RawMovement creates performance experiences using movement, architecture, sound, light and new media to create whole environments exploring concepts drawn from the cultural landscape intended to ask questions and provoke discussion. RawMovement shares these dances in the hopes of eliciting an emotional response to a movement-based experience in both traditional and non-traditional performance settings and environments expanding the boundaries of where and how performances are experienced. Using both set choreography and structured improvisation performance works are created and shared with as wide and diverse an audience as possible.

The conceptual ideas for the work are shaped by the current cultural climate where what is seen and known as truth, logic and order is constantly challenged and the feeling that multiple realities are coexisting with different narratives are constantly struggling against each other. The piece begins simultaneously in four separate locations challenging the audience with what can be seen and known and culminates in the same space. The audience is invited to create the landscape of the performance by placing the set pieces at random in the theater space at the start of the work creating an unexpected landscape that the performers must navigate and renegotiate throughout every performance of the work. Composer Darren Solomon is performing and creating the score in real time during the work and Media Artist Kat Sullivan is creating and responding to the performers as well.

This work was made, in part, with the generous support of City College Center for the Arts and the CUNY Dance Initiative.

Darren Solomon is a composer, bassist and keyboard player, based in Brooklyn. He began his career touring with Ray Charles while still in his teens, and went on to work both as an instrumentalist and composer. He has written the music for hundreds of TV commercials, winning both a Clio and Cannes Gold Lion for best music. His collaborative music website In B Flat 2.0, was featured on CNN and NPR’s Weekend Edition, and he records electronic music and remixes under the name Science for Girls. Darren is currently a Visiting Affiliate Artist at SUNY Purchase.

Kryssy Wright is a lighting and scenic designer living in Brooklyn. Since relocating to Brooklyn she has designed and built sets, designed and hung light plots, stage managed, set up audio and video systems, production managed, tech directed, and swept a lot of floors. While in NYC , Kryssy has worked with the Esemble Studio Theater, Columbia University, INTAR, Noemie LaFrance, PS122, Danspace, Abrons Art Center, and many others. Currently Kryssy is the Technical Director and Resident Designerof the Theater at the 14StreetY. She is an Associate Artist with Third Rail Projects, whom with she was awarded a Bessie, Avant Media, and LABA. Her degree is from Bennington College.

Brooklyn-based artist Kat Sullivan exists at the intersection of movement and technology. After earning her Bachelors in Computer Science and Dance at Skidmore College, she worked as a software engineer and freelanced as a dancer. At NYU’s Interactive Telecommunications Program (ITP), she developed a practice around creative coding, live performance, machine learning, and other emerging technologies. She has presented works at Lincoln Center, National Sawdust, Pioneer Works, SXSW, 14th Street Y, and the Liberty Science Center, and was selected for residencies by NYU ITP and Pioneer Works. Currently Ms. Sullivan is an adjunct professor at NYU, teaching courses on motion capture, live performance, and programming.

John J Zullo, Artistic Director originally from the Bronx, New York and currently resides in NYC. He graduated from American University in 1996 with a Bachelors in Anthropology and 1999 with a Masters of Arts in Dance. His work was presented at Dance Place in Washington, DC and awarded the Arts Club of Washington’s Award for Outstanding Choreographer. John performed for Jeff Rebudal, Regina Nejman, & Erick Monte and has taught both nationally & internationally at various festivals, colleges and universities. Most recent guest artist work includes The College of Charleston, Charleston, South Carolina, The Greenwich Academy and Barefoot Dance Company in Kingston, New York. Other work includes the Community College of Baltimore County and Trajectory Dance in Baltiore, Maryland. Zullo has also taught and lectured at Western Michigan University, MI, Emory University, GA, Textured Dance, IL, New York University, the Greenwich Academy in CT, Coppin State University, Baltimore, MD, The Chadwick School, Los Angeles, CA, The Dance Complex & Green Street Studios in Cambridge, MA, American University and The Washington Ballet at THEARC in Washington, DC, Adelphi University, Hunter College, and Wayne State University in Detroit, MI, as well as Wells College in NY and the YMCA/Evolve Dance in Tarrytown, New York.

Zullo/RawMovement has been performing at various venues in NYC since January 2010. Zullo/RawMovement was selected for the CUNY Dance Initiative Residency and is the artist-in-residence at City College for the creation of the new evening length work “Liable to Change” premiering fall 2017. RawMovement was presented at the 92nd Street Y, BAM for the Everybooty Festival June 2015 & 2016 and was selected for FLICfest 2015 at the Irondale Center in Fort Greene, Brooklyn. RawMovement was co-presented at the Dance Complex in Cambridge, MA, and was presented at the American Dance Institute in Rockville, MD. RawMovement presented 3 seasons in New York City at the 14th Street Y October 2015 with the evening length “The Architecture of Proximity”, “The Memory Suite” evening of three works at Danspace Project at St. Mark’s Church 2013 and the evening length “How Brief Eternity” at Theater for the New City 2011. RawMovement has performed for the LaMaMa MOVES! festival 2013, as well as multiple evening presentations of works at Dixon Place and has shown work at Eden’s Expressway at Movement Research, the Dumbo Dance Festival and the CoolNYC Festival at the John Ryan Theater in Dumbo, the Ailey Center, City Center Studio 5, Green Space, The LES Festival 2011 through 2016 at Theater for the New City. Zullo was selected for the LaMaMa Spoleto Open in Spoleto, Italy.