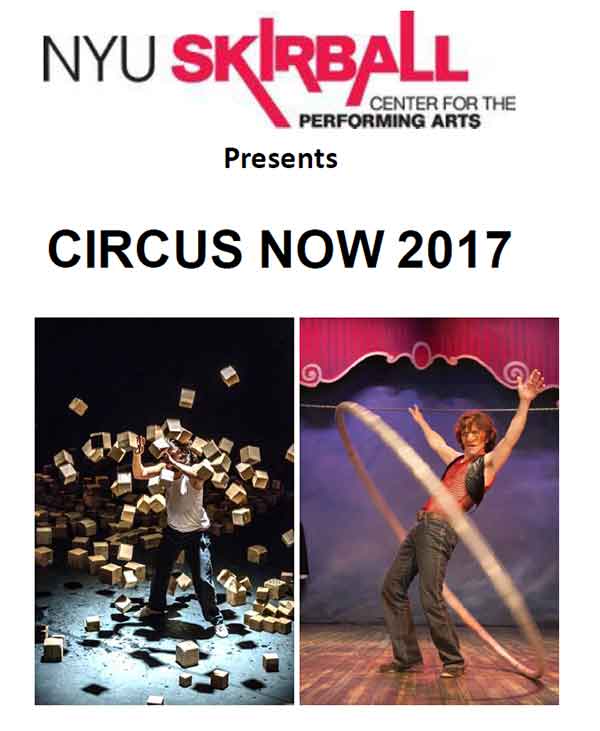 From the U.S. and Around the World

Visit the official page to learn about purchasing tickets!

Asylum, a theater piece performed largely in the air, examines the forgotten lives of 6 patients and employees of a state mental institution that was shuttered in the 1970s. The story is told using aerial acrobatics, live music, projection and shadow work, and features music composed for this production by Grammy nominee Sophie B. Hawkins. https://vimeo.com/197305638

Boom! is an explosion of exhilarating entertainment for the entire family. In this theatrical circus show, two performers portray a cast of six characters who put on a world-class acrobatic show featuring live music, heart-touching drama and hilarious audience interaction. Peter Sweet and David Poznanter pull off this virtuosic multiple-character show with the use of hand-crafted theatrical masks in the Italian Commedia Dell’Arte tradition, complete with slackrope, Cyr Wheel and juggling.  http://www.boomcircus.com/the-show/

Boom! Circus is a partnership between Peter Sweet, a professional actor, clown and acrobat, and David Poznanter, a circus artist, dancer, singer, and mask-maker. http://www.boomcircus.com

When the day-to-day, ordinary and trivial actions of a man and a woman are transformed into the unexpected and remarkable, they begin a journey to another dimension. Nothing is what it actually seems to be, as mundane activities mingle with physical theater, enhanced by the poetic richness of circus. https://vimeo.com/97156514

Artinerant’s – Art in Motion was created by Daniel Pedro and Maira Campos to reaffirm the circus as a millenary ancient language that serves as a dialogue between performers and audiences in streets and theaters, in towns and cities throughout the world.  http://www.artinerants.com.br/en

Disco 3000 looks at the superstar culture of modern performance art and laughs at the phenomenon through acrobatic clownery. The irreverent and dark-hued performance is infused with black humor and thrills the audience with razor sharp circus skills.

Race Horse Company’s physical and raw contemporary circus performances are based on the aesthetics of chaos, humor and surprise. The company approaches circus without questioning, leaving philosophy and thinking to the spectators. The company was founded in 2008 by Rauli Kosonen, Kalle Lehto and Petri Tuominen, and since the very beginning, has focused on touring; their ultimate objective is no less than take over the entire world. http://racehorsecompany.fi/performances

Nacho Flores has developed his own unique circus technique: balancing on wooden cubes. Tesseract takes us into a surrealistic world cluttered with cubes, where daily life activities become perilous when perched atop high columns.    The ephemeral prevails: as soon as a construction is erected, it is immediately shifted, dismantled, destroyed.  Before our eyes, the cubes are piled up in a multitude of forms, opening the door to a new range of possibilities.  “Turning ordinary into extraordinary” is the mission of Nacho Flores.

Disco 3000 looks at the superstar culture of modern performance art and laughs at the phenomenon through acrobatic clownery. The irreverent and dark-hued performance is infused with black humor and thrills the audience with razor sharp circus skills. http://racehorsecompany.fi/performances

Circus Now, a volunteer-powered circus advocacy organization, works to support and spread circus in a variety of ways: professional development workshops, social media advocacy, and community-building events. The company encourages and promotes circus as an art and a practice and helps circus companies survive, thrive and connect with theaters and presenters from around the world.  www.circusnow.org

Circus Now 2017 will be presented on Friday, March 3 and Saturday, March 4 at 8 pm (Note: Evening performances may contain adult themes), and Sunday March 5 at 2 pm (family friendly performance). Evening tickets are $35 – $65; matinee tickets are $20 – $45 and may be purchased online at www.nyuskirball.org or in person at the NYU Skirball Center Box Office: Tuesday-Saturday, 12:00–6:00 P.M. NYU Skirball Center for the Performing Arts is located at 566 LaGuardia Place at Washington Square, New York, New York 10012.