Christmas Tree and Neapolitan Baroque Crèche at the Met 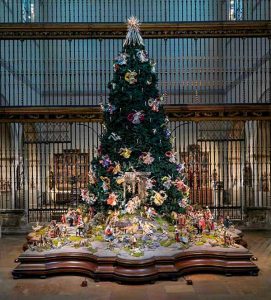 Please remember that the museum has a pay what you can policy.

The Met continues a beloved holiday tradition with the presentation of its Christmas Tree and Neapolitan Baroque Crèche, which will be on view from November 20, 2018–January 6, 2019. Magnificently set in front of the 18th-century Spanish choir screen from the Cathedral of Valladolid in the Museum’s Medieval Sculpture Hall (gallery 305), the tree has become a must-see holiday favorite of both New Yorkers and visitors from around the world. Recorded Christmas music in the gallery adds to the enjoyment of the holiday display.

The towering 20-foot blue spruce is gracefully lit and adorned with 19 cherubs and 59 angels, while at the base an additional 71 figures represent the three elements of Nativity scenes that were traditional to 18th-century Naples: adoring shepherds and their flocks, the procession of the three Magi, and spirited peasants and townspeople. Enhancing the display are nearly 50 delightful animals and background pieces that create a dramatic setting for the Nativity; these include the ruins of a Roman temple, several quaint houses, and a typical Italian fountain.

The exhibit of the crèche is made possible by gifts to The Christmas Tree Fund and the Loretta Hines Howard Fund.

History of the Tree Display

The annual Christmas display has evolved through the generosity, enthusiasm, and dedication of the late Loretta Hines Howard, who began collecting crèche figures in 1925. Mrs. Howard conceived the idea of presenting the elaborate Neapolitan Nativity scene under a Christmas tree— tradition rooted in Northern Europe—with angels swirling upward to the crowning star, and was later ably assisted by her daughter Linn Howard. Over many decades, Linn Howard contributed to the tree’s great beauty by adding and improving details that are fundamentally reflected in the current display.

This unusual combination was first presented to the public in 1957, with The Met’s exhibition of Mrs. Howard’s collection. Since 1964, more than 200 Neapolitan crèche figures from the 18th century have been given to the Museum by Loretta Hines Howard and displayed in the galleries each holiday season.