At The 2014 Mocca Arts Festival

New York, NY – March 20, 2014 – The blockhead soars! This year, one of the world’s most beloved comic strip characters will take flight at the 2014 MoCCA Arts Festival. Straight from the Macy’s Thanksgiving Day Parade®, the Charlie Brown balloon will make a very special appearance to delight fans young and old as he soars inside the 69th  Regiment Armory. Since his debut in the 2002 Macy’s Parade the 50.9-foot tall, 53.4-foot long and 29.4-foot wide, balloon rendering of the classic Charles M. Schulz character has been one of the most recognized and admired floating wonders in the annual holiday Parade.

Charlie Brown will be on display April 5-6, joining 2014 MoCCA Arts Festival fans and honorees including Alison Bechdel, Howard Cruse, Fiona Staples and Robert Williams, who will be celebrated for their work in illustration, comic and cartoon art during the acclaimed arts gathering. 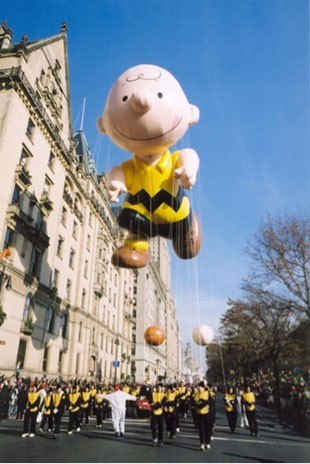 Since his first appearance in Li’l Folks in 1942, Charlie Brown has shifted from comic strip character to beloved star of TV, the stage and an upcoming feature film. During his tenure in the annual Thanksgiving Day celebration, Charlie Brown left millions of fans around the world in awe. Dressed in his signature zigzag striped sweater, Charlie Brown will leave a giant impression on MoCCA attendees as he flies high above their heads at the festival. Charlie Brown proves that cartoon art, which was once relegated only to the black and white pages of local newspapers, can transcend artistic definition to become an iconic character recognized around the world and beloved by generations of fans.

About the Macy’s Thanksgiving Day Parade:

With more than 50 million viewers across the country and more than 3.5 million spectators that line up along the streets of New York City each year, the Macy’s Thanksgiving Day Parade is a national icon that has grown into a world-famous holiday event. For more than 85 years, the Macy’s Thanksgiving Day Parade has marked the official start of the holiday season. Growing in size and scale, the Parade proudly marches down a more than 2-mile route in New York City with more than 8,000 participants in tow including Macy’s employees, their families, celebrities, athletes, clowns and dance groups spreading holiday cheer.  The Parade also features America‘s best marching bands, fabulous floats and Macy’s signature giant helium character balloons.  For more information on the Macy’s Parade please visit www.macys.com/parade or call the Parade hotline at (212) 494-4495.

About the Society of Illustrators

The Society of Illustrators, founded in 1901, is the oldest nonprofit organization solely dedicated to the art and appreciation of illustration in America. Prominent Society members have been Maxfield Parrish, N.C. Wyeth and Norman Rockwell, among others. The Museum of American Illustration was established by the Society in 1981 and is located in the Society’s vintage 1875 carriage house building in mid-town Manhattan.  In 2012 the Society acquired the Museum of Comic and Cartoon Art. It’s mission is to promote the understanding and appreciation of comic and cartoon art along with the artistic, cultural, and historical impact of what is the world’s most popular art form. The MoCCA Arts Festival, begun in 2002 and continued by the Society, features a selection of independent comic and cartoon artists and includes programming, gallery space, and an Exhibition Hall.  The Society is open to the public Tuesday, 10 am-8 pm; Wednesday-Friday, 10 am-5 pm; and Saturday, 12-4pm.  To learn more about visiting the Museum, Admission and the Society go to www.societyillustrators.org.