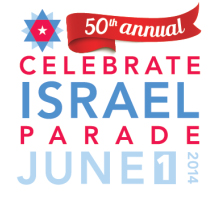 The 2014 Celebrate Israel Parade, the world’s largest public gathering honoring the State of Israel, will celebrate its 50th anniversary with a magnificent family-friendly parade Sunday, June 1, from 11 AM to 4 PM, up Fifth Avenue from 57th to 74th Streets, Manhattan.

Fifth Avenue will turn blue and white as more than 30 floats with Israeli and American musical performers, 15 of the region’s best marching bands and 35,000 marchers entertain hundreds of thousands of spectators.

The parade will “lift off” by featuring SpaceIL, the Israeli non-profit organization working to land the first Israeli spacecraft on the moon. For the fourth year in a row, the Parade will be televised live by FOX affiliate, WWOR-TV My9 from 12–2 p.m. and streamed online at celebrateisraelny.org. Robert Benrimon, founder of Skyframe Inc., is the Grand Marshal for this year’s parade.

The parade will take place rain or shine. For the latest information on this 50th anniversary celebration, please visit the website at celebrateisraelny.org, or follow on Twitter @celebrateisrael or visit the Facebook page: Celebrate Israel Parade.