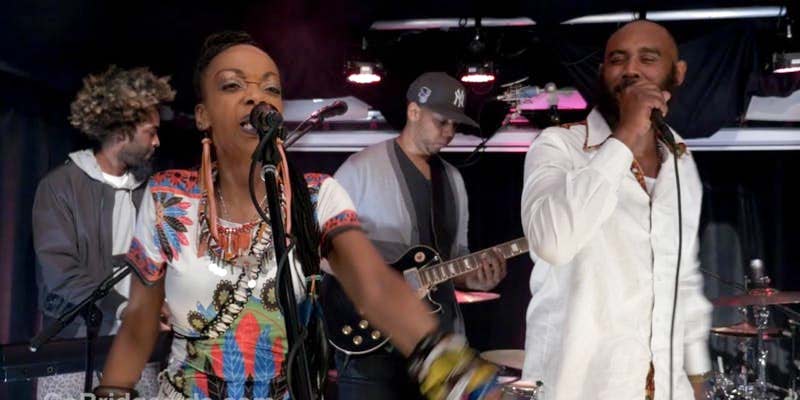 New York, New York — The Caribbean Cultural Center African Diaspora Institute (CCCADI) is pleased to present its next #AfroWaveSessions on Thursday, April 25, from 6:00 pm to 9:00 pm, with Spirit Music Night, a program honoring the marriage between West African spirituality and music. The evening features music by multi-disciplinary artist Shaun Kelly and his band Ori Nugo, who defines his music as “hood spiritual hip-hop”. #AfroWaveSessions is a monthly concert series showcasing the Black cultural evolution with vanguard artists of the Global African Diaspora. Spirit Music Night will be presented at CCCADI’s home site the landmark Firehouse located at 120 East 125th Street. Admission is suggested donation of $5 and tickets are by Eventbrite.

Shaun Kelly is a renowned percussionist, composer, vocalist who has played with musical legends in front of hundreds of thousands of fans around the world. Throughout his 20-plus year career, Shaun–a Flushing, Queens native–immersed himself in all forms of music including Hip-Hop, Jazz, Country, West African/Central African percussion, Pop, and Rock studying music at Harlem School Of The Arts since the tender age of 11. Shaun has played drums and percussion, gracing stages around the world with artists such as Les Nubians, Hassan Hokmoun, Rob Glasper John Legend, Pete Rock & C.L. Smooth, Anthony Hamilton, Blitz The Ambassador, Vinx, and The Last Poets.

CCADI is the foremost African Diaspora Cultural Arts Institution and Learning Center in New York.  Since our founding in 1976 by Dr. Marta Moreno Vega,  we have sought to preserve and present African Diaspora cultures; train the next generation of cultural leaders; and unite Diaspora communities by leveraging  arts and culture as tools for social justice and change. Each of CCCADI’s programs asserts the centrality and relevance of African, Afro-Caribbean and Afro-Latino culture. CCCADI carries out its mission through public art exhibitions, performances, educational programs, internships, fellowships, workshops, conferences, collaborations and international exchanges.