“Whether it’s pizzazz or peace, the sextet is a cappella glory.” — People 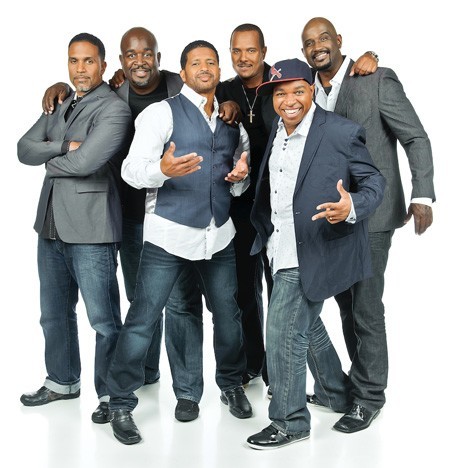 Brooklyn Center for the Performing Arts at Brooklyn College continues its 60th Anniversary Season with a concert by Grammy-winning a cappella jazz group Take 6 on Saturday, April 18, 2015 at 8pm. Heralded by Quincy Jones as the “baddest vocal cats on the planet,” the most awarded vocal group in history (10 Grammy Awards, 10 Dove Awards, a Soul Train Award, and more) celebrates their 25th Anniversary in a soulful concert that fuses gospel, jazz, R&B, and pop. Tickets are $30-40 and can be purchased at BrooklynCenter.org or by calling the box office at 718-951-4500 (Tue-Sat, 1pm-6pm).

Take 6 (Claude McKnight, Mark Kibble, Joel Kibble, Dave Thomas, Alvin Chea, and Khristian Dentley) is the quintessential a cappella group and model for vocal genius, with six virtuosic voices united in crystal clear harmony against a backdrop of syncopated rhythms, innovative arrangements, and funky grooves. With praise from such luminaries as Ray Charles, Stevie Wonder, Brian Wilson, Ella Fitzgerald and Whitney Houston, the multi-platinum selling sextet has toured across the globe, collaborated across genres, and is recognized as the preeminent a cappella group in the world.

Take 6 has come a long way from their days at Huntsville, Alabama’s Oakwood College where McKnight formed the group as The Gentleman’s Estate Quartet in 1980. After tenor Mark Kibble heard the group rehearsing in the dorm bathroom, he joined in the harmonies and performed on stage that night. When Mervyn Warren joined shortly afterward, they took the name Alliance. Yet, when they signed to Reprise Records/Warner Bros. in 1987, they found that there was another group with the same name, so they became Take 6. Says McKnight: “Take 6 was all about a democratic process of sitting in a room together and throwing a couple of hundred names at each other and Take 6 was the one that got the most yay votes [laughing.] It pretty much was a play on the Take 5 jazz standard and the fact that there are six of us in the group, so it became Take 6.” Their self-titled debut album, released the following year, won over jazz and pop critics, scored two Grammy Awards, landed in the top ten on Billboard’s Contemporary Jazz and Contemporary Christian charts, and they’ve never slowed down.

One, Take 6’s recent recording on Shanachie, is notable for three reasons. First, it is the group’s return to their spiritual heritage. Second, it is their first project without Cedric Dent, who retired from full-time touring with the group in 2011. “Cedric had taken a position with MTSU (Middle Tennessee State University in Murfreesboro, TN) which didn’t allow him to go out on the road during the school year and kind of limited him only to the weekends and that’s if it worked for the schedule,” says Kibble. “So we decided it was best to find a person to step in and cover him when he couldn’t be there.” Third, it introduces Khristian Dentley as a full-time permanent member of Take 6. Kibble continues, “We actually had a pool of three people we used over the years. Khristian was one of those people called on to step in. He did it beautifully and had a lot of energy. In standing in for Cedric, we were able to learn his personality and he was able to learn the music. After 7 years, Cedric decided to go full time into academia and when he did, Khristian was already primed to step in behind him.” As Take 6 celebrates with a new show for their 25th Anniversary, they will share the memories in the music of the past 25 years, as well as reveal what they are looking toward the future.