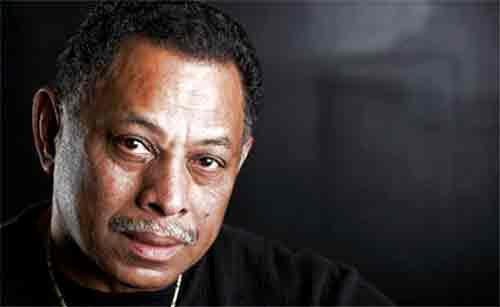 Brooklyn Center for the Performing Arts at Brooklyn College is pleased to partner with renowned DJ/producer Felix Hernandez, who will host Rhythm Revue: A Latin Soul Celebration, an evening of live music and DJing celebrating the musical genres of Latin Soul and Boogaloo, on Saturday, April 9, 2016 at 8pm. Presented in concert format and not as one of Hernandez’s traditional dance parties, the show will feature the “King of Latin Soul,” Joe Bataan.Tickets are $25 and can be purchased at BrooklynCenter.org or by calling the Brooklyn Center box office at 718-951-4500.

In the 1950s and ’60s, African Americans in the United States listened to various styles of music, including jump blues, R&B and doo-wop. Puerto Ricans in New York City shared these tastes, but they also listened to genres like mambo or cha-cha-chá and bossa nova. There was a mixing of Puerto Ricans, Cubans, African Americans and others in clubs, whose bands tried to find common musical ground. Boogaloo was a result of this search, a marriage of many styles including Cuban son montuno, guaguancó, guajira, guaracha, mambo, and American R&B and soul. With lyrics sung in both English and Spanish, this highly danceable and distinctly urban form of music reflected the amazing multicultural fabric of New York City.

In 1991, Felix created the Rhythm Revue Dance Party in New York City. This event is held at the famous Roseland Ballroom as well as other major venues throughout the metro area. For 24 years, Felix’s dance party has drawn over 3,000 people for sold-out events every month. He also created and hosts Rhythm Revue, New York’s first radio show devoted to classic R&B and soul music. Now in its 29th year, Rhythm Revue is heard every Saturday on WBGO 88.3FM. Felix’s show was also on 98.7 KISS-FM in NYC, and WTJM (Jammin 105), also in NYC. Felix was part of Sirius/XM’s first team of programmers, where he developed several music channels including classic R&B and classic Top 40.

Between 1989 and 1995, Felix created and produced BluesStage, a weekly live blues, classic rock and R&B series that was distributed by NPR to 200 of its stations nationwide. The show’s hosts were Tony-winner (the late) Ruth Brown and film director/actor Melvin Van Peebles.

The son of a Filipino mother and African American father, Latin soul pioneer Joe Bataan grew up in the East Harlem neighborhood of New York City. Running with a Puerto Rican street gang called the Dragons, he was arrested for auto theft and did several years of prison time, but upon his release in 1965 he turned his energy to music and formed his first band, Joe Bataan and the Latin Swingers.

Bataan was influenced by two musical styles: the Latin boogaloo and African American doo-wop. His talent for combining doo-wop-style singing with Latin rhythms drew the attention of Fania Records, who signed him in 1966. His soulful voice and creative arrangements on songs like “Gypsy Woman” (1967) and “Subway Joe” (1968), recorded on the Fania record label, appealed to a diverse audience.  He released a total of eight original titles for Fania, including the gold-selling “Riot!” These Fania albums often mixed energetic Latin dance songs, sung in Spanish, with slower, English-language soul ballads sung by Bataan himself. In the era of the bugalú and Latin soul, he became a leading innovator in the blending of African American and Latin Caribbean styles.

While still signed with Fania, Bataan secretly started the Latin music label Ghetto Records, under which he produced several albums for other artists, including Papo Felix, Paul Ortiz, and Eddie Lebron.

After leaving the Fania label, Bataan continued to promote music that blended diverse styles. In 1973, he helped coin the phrase “salsoul,” lending its name to both his first post-Fania album (released by Mericana) and his own Salsoul record label, co-founded with the Cayre brothers. He recorded three albums for Salsoul and several singles, including “Rap-O-Clap-O” (1979), which topped the charts in Europe, was an exuberant mixture of disco beat, Latin percussion, and rap that reflected the intersecting cultural currents of Bataan’s life.

After his 1981 album, Bataan II, he retired from the music industry, subsequently working as a youth counselor in one of the reformatories he himself had spent time in as a teenager. In 2005, Bataan broke his long hiatus with the release of Call My Name, recorded for Spain’s Vampisoul label, who also produced Bataan’s 2009 release, King of Latin Soul.