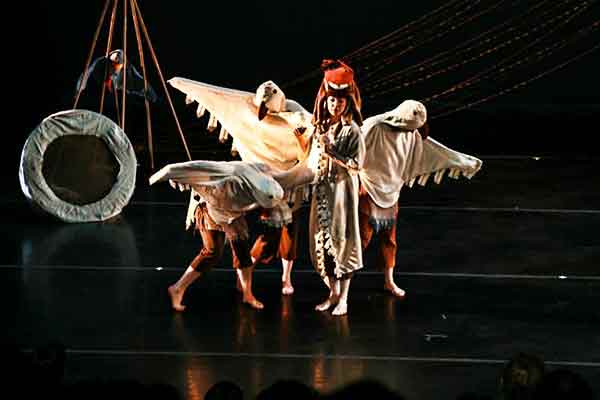 Recommended for ages four and up
Tickets: $15

Brooklyn Center for the Performing Arts at Brooklyn College continues its 2016-17 family series on Saturday, February 11, 2017 at 2pm with Treehouse Shakers’ production of the original dance-play, Coyote’s Dance. This interactive spectacle leads young audiences into the remarkable world of Coyote, the infamous mischief-maker from Native American cultures.

Performances of Coyote’s Dance will be at the Kumble Theater, located at Long Island University’s Brooklyn campus in downtown Brooklyn, not at Brooklyn Center’s regular venue, Whitman Theatre at Brooklyn College. The production is recommended for ages four to ten. Tickets are $15 and can be purchased at BrooklynCenter.org or by calling the box office at 718-951-4500 (Tue-Sat, 1pm-6pm).

Written and choreographed by Treehouse Shakers’ co-founders Mara McEwin and Emily Bunning, with music by award-winning musicians Roderick Jackson and the First Women’s Nation a cappella group, Ulali, Coyote’s Dance envelops the culture and story of Coyote, whose exploits are recounted among many North American Indian Nations. Audiences follow Coyote as he humorously tries to turn himself blue with the help of a songbird, outwit a sly and handsome Fox for his eagle feathered-robe, and dances with the mesmerizing stars in the universe. The set, compiled of several trampolines, keeps audiences thoroughly awe-struck as Coyote and friends fly, jump and dance through the air. The engaging contemporary dance, live music, and beautiful costumes will have even the youngest of audience members dancing and laughing in their seats. The performance runs 45 minutes with no intermission and is recommended for children ages four and up.

Founded in 1997 in New York City, Treehouse Shakers’ mission is to create original dance-plays that encourage multi-generational audiences to experience a connection to their community. Their young audience programming is unique in its offering young audiences a guided look at modern dance through powerful and meaningful theater. Their work is sometimes the first performance, specifically in viewing dance, which many young people experience. Treehouse Shakers creates work that experiments with narrative styles and explores the story’s elements through the abstractions of modern dance. Their performance repertoire includes 13 original works that addresses every age-level within youth programming. As one of New York’s only dance-theater companies solely creating original work for young audiences, their goal is to provide inventive, intelligent and engaging performances that nurture creative thought and inspire dialog. They strive to create the highest caliber work that will stimulate, connect and entertain audience members. Ever increasing their reach, they tour nationally and partner with local schools and non-profits to provide 1,000+ free and discounted tickets to underserved and low-income youth and families. Complimenting performances, Treehouse Shakers provides teacher trainings and residencies for students that focus on the art of dance and storytelling.

Treehouse Shakers was named for the wonders of nature, the power of imagination and the excitement of dance. The treehouse, like the theater, is a sacred space where imagination is the most potent currency and stories are the roots of the world.