that dares the audience to get up and dance.” 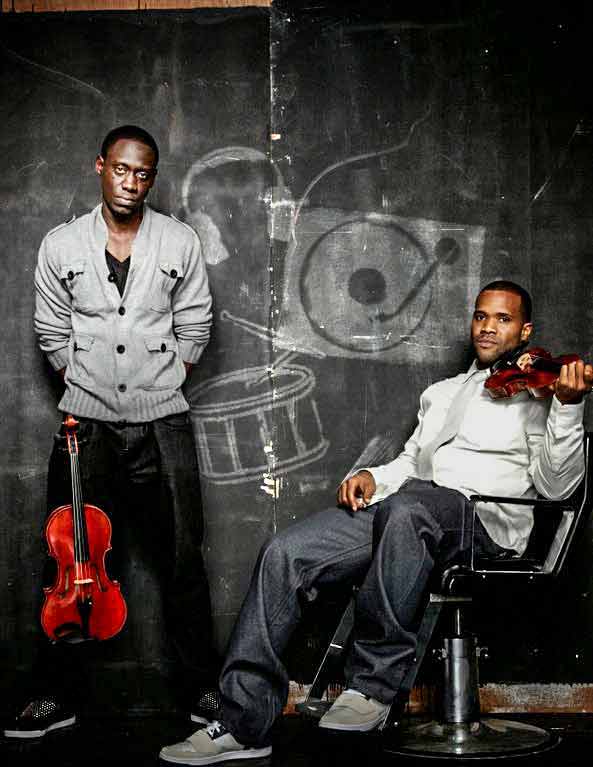 Brooklyn Center for the Performing Arts at Brooklyn College continues its 2015-16 season on Saturday, November 14, 2015 at 2pm with the return of three-time Amateur Night at the Apollo winners Black Violin.  Celebrating the September 18, 2015 release of their newest album, Stereotypes, this classically trained violin duo inspires young people to get fired up about classical music with their unique fusion of classical, hip-hop, jazz, blues, and R&B. Recommended for ages eight and up.  Tickets are $18 and can be purchased at BrooklynCenter.org or by calling the box office at 718-951-4500 (Tue-Sat, 1pm-6pm).

An assortment of voices-different ages, genders, races-speak over a tense, clipped groove. Phrases overlap, offering definitions of a word while a beat snaps and propulsive strings bite and race up and down a scale. “A stereotype is an often unclear and untrue belief” says one; “a standardized mental picture” echoes another. Eventually, one voice settles in out front, explaining the responsibility that comes with a stereotype-“it gives me a goal, something to try to debunk.”

The opening and title track to Stereotypes, the major-label debut by Black Violin, serves as a mission statement for an ambitious and groundbreaking group. Wil Baptiste (viola) and Kev Marcus (violin) are a string duo from Florida with equal footing in the worlds of classical music and hip-hop. Though they have been playing together since high school, with Stereotypes, they take a great leap forward, from admirable rarities to significant innovators. “Our mantra has always been to encourage the audience to look at things from a different perspective,” says Kev. “At first, we leaned on the fact that we were different, more than on our technique-we wanted you to be confused. This time, we tried to keep our core message, but with more gravitas, more seriousness. Not just be crazy and different, but really step it up and be badass violinists.”

“Wil and Kev’s DNA is all about shattering and breaking stereotypes,” says producer Eli Wolf, who has worked with the likes of Norah Jones, Wynton Marsalis, and Elvis Costello. “We wanted the album to thread their sound through a kaleidoscope of styles, and bring out ways to break down categories and barriers into something multi-faceted and expansive.” The members of Black Violin first met in Ft. Lauderdale, and played together in the orchestra at the Dillard High School of the Performing Arts. Classically trained by day, they faithfully put on their headphones and listened to the hottest rap records each night. They went to different colleges- Marcus attended Florida International University and Wil B went to Florida State-but then reconvened, moved into an apartment together, and started trying to produce other musicians. “We wanted to be the next Neptunes, the next Timbaland,” says Baptiste, “but we noticed how, whenever we performed with our artists, the audience was really drawn to us.”

They developed an act covering hip-hop songs on their violins, which became popular in local clubs. Two years after sending in a tape to Showtime at the Apollo, they were invited to appear on the show -which they won, and kept winning. “After we won the Apollo, which is the hardest audience on the planet, we knew there was something there,” says Kev. “The hard thing was to package it so that people would give us a chance, because we’re doing something that nobody had ever seen. Every time we step on stage, we had to prove it over and over.” They were approached by the manager of Alicia Keys, who asked them to perform with the singer on the Billboard Awards. Other offers followed-they toured with Mike Shinoda of Linkin Park, opened for the Wu-Tang Clan, scored an episode of CSI:New York, and even performed for President Obama at his second inauguration in 2013. Individually and together, Wil and Kev have worked with everyone from Kanye West to Tom Petty, Lupe Fiasco to Aerosmith. All the while, Black Violin continued touring non-stop (playing as many as 200 shows a year) and released two independent, self-financed albums.

But in bringing Black Violin to Universal Music Classics, Wolf saw the opportunity to give the duo the resources that would take their music, and their intentions, even further. “These songs really put the message in the music, instead of being more instrumental,” he says. “The lyrics reflect those ideas. A lot of them speak to racial strife today, in ways that are timely and timeless.” The results demonstrate all of the possibilities, in sound and content, for the versatile pair. “Invisible” offers a penetrating update on themes explored by Ralph Ellison in Invisible Man. The Beck-meets-Seal space-soul of “Addiction,” with a lead vocal by Wil, picks up where PM Dawn left off, while “Stay Clear” has a swirling groove that recalls such lush R&B as Quincy Jones’s historic creations with Michael Jackson.

The head-nodding, virtuosic “Runnin” required a new level of instrumental precision from the musicians. “We really had to practice and learn new things to pull that one off,” says Kev. Even the three covers included on Stereotypes are purposeful, mapping out the possibilities of strings in contemporary music. “Shaker,” from Aaron Copland’s Appalachian Spring, is among the purest of American melodies (“You’ve heard it before, even if you don’t know what it’s called,” says Wil). Burt Bacharach and Hal David’s “Walk On By” was given one of the most epic, dramatic string arrangements of all time in Isaac Hayes’s incomparable 1969 rendition. And “Bittersweet Symphony,” by the Verve (a bonus track on this album) is truly a modern classic; “that song’s been in everyone’s wedding for twenty years,” says Wil.  With Stereotypes, Black Violin set out to achieve something more than just selling some records or gaining notoriety as a curiosity. “We want to really be something that young musicians aspire to,” says Kev. “For us, the violin is the vehicle for a bigger message, which is not to be afraid to be different.”

Brooklyn Center for the Performing Arts’ presentation of Black Violin is made possible, in part, by Con Edison.