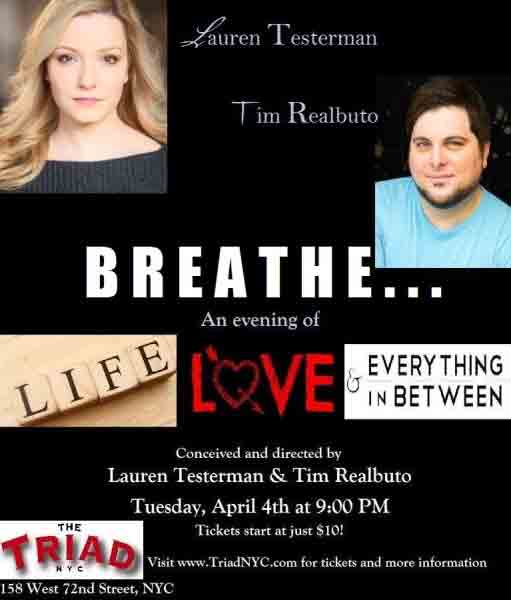 BREATHE: AN EVENING OF LIFE, LOVE AND EVERYTHING IN BETWEEN, FEATURING BROADWAY STARS

Co-Directed and Co-Conceived by Lauren Testerman and Tm Realbuto.

Musical Direction by Julianne B. Merrill

Performer Lauren Testerman (Love Quirks; Off-Broadway’s The Black Book) and performer/composer Tim Realbuto (Ghostlight the musical; Off-Broadway’s YES) will co-direct and star in a benefit concert entitled BREATHE: AN EVENING OF LIFE, LOVE AND EVERYTHING IN BETWEEN on April 4th at 9:00 PM at the Triad Theatre in New York City. They will be joined on stage by some of NYC’s best talent, including stars from television and the Broadway stage.

“In 2016, NYC actor Lauren Testerman’s life was turned upside down when she found out that her mother Robin was diagnosed with advanced small cell lung cancer. Even during long trips back & forth from NYC to Dutchess County to attend her mother’s chemotherapy treatments, Lauren has continued to perform & remain as positive as she possibly can. So, for one evening only, Lauren & her friend, performer/composer Tim Realbuto, will join together to celebrate life & beating the odds. They’ll be joined by incredible NY performers who’ve devoted their time and talents to sing about life, love and everything in between.

100% of the proceeds will go directly to Robin Testerman’s growing medical bills.