Comes To The Met For The First Time In Nearly 100 Years, In An Acclaimed New Production

Premieres in select movie theatres across the United States 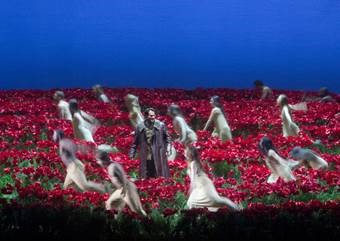 Gianandrea Noseda, a specialist in Russian music, will conduct a new edition of the opera—left unfinished by Borodin at the time of his death in 1887—which has been specially created for the Met production. The cast also includes Ukrainian soprano Oksana Dyka in her Met debut as Igor’s wife, Yaroslavna; Anita Rachvelishvili as the fiery Polovtsian princess Konchakovna; Russian tenor Sergey Semishkur in his Met debut as Igor’s son, Vladimir Igorevich; Mikhail Petrenko as Yaroslavna’s brother, Prince Galitsky; and Štefan Kocán as Khan Konchak, leader of the Polovtsian forces.

This season, The Met: Live in HD series will reach an audience of approximately 3 million people across 1,900 theaters in 64 countries, and offers subtitles in nine languages, including Swedish for the first time. The 2013-2014 HD season continues with 4 other live transmissions. For complete information on locations and tickets, visit www.metopera.org/hdlive.