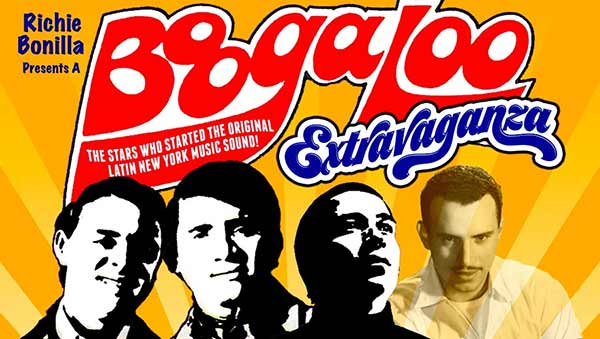 A SPECIAL TRIBUTE TO JOE CUBA

After Mambo and before Salsa, there was Latin Boogaloo. Like many of New York’s 1960’s teen population, Latinos listened to and created music in various genres. They included Doo Wop, R&B, and the Blues. At the same time masses of Latino teenagers were getting electrified and drawn to a new musical sound coming from the streets of New York’s Latino neighborhoods. It was called Latin Boogaloo. Latino kids claimed it as part of their identity. They finally had something to call their own. The birth of Latin Boogaloo coincided with the birth of the Nuyorican.

On September 30th join the official emcee for the Fania All Stars, Izzy Sanabria – as he presents the original stars of this genre in – A Boogaloo Extravaganza.
Widely known as Mr. Salsa, Mr. Sanabria is a Multi-Disciplinary artist, writer, actor, comedian, dancer, photographer and publisher. One of the Salsa generation’s most prolific artistic visionaries, Mr. Sanabria is a cultural icon whose work throughout the 1970’s helped promote and illustrate the look of New York’s Latin Music through his 100s of album covers, poster designs, and publishing of Latin NY Magazine, as well as hosting the SALSA – TV Show. Sanabria’s contributions to New York’s Latino culture endure to this day.

Richie Ray and Bobby Cruz
The dynamic duo who contributed to the development of Salsa and the writers and singers of iconic songs such as Jala Jala, Agúzate, Bomba Camará, Sonido Bestial and many more. The duo helped in establishing the popularity of Salsa music in the 1960s and 1970’s. They are also notable for fusing elements of Classical music and Rock with traditional Latin music. In November 2006, The Latin Academy of Recording Arts and Sciences gave Richie Ray and Bobby Cruz a Lifetime Achievement Award.

Pete Rodriguez
Ordained the “King of Boogaloo” and pioneer of this musical movement who produced such classics as – I Like It Like That, Micaela, and Fango.

The New Swing Sextet
A product of New York City and the excitement and turbulence of the sixties, the New Swing Sextet made its professional debut performing in the Singer Bowl at the last New York Worlds Fair in 1965. The band has been a popular and innovative exponent of Latin jazz, salsa and pop music for nearly four decades, with such hits as; Monkey See Monkey Do, El Coquero, My Favorite Things, and Vete Pa Ya.

Frankie Morales
Frankie is an artist who has perfected his craft with every stop along the way of his career. At the age of fourteen he sang backup for Latin Legend, Joe Baatan. By sixteen, he was singing with Hector Lavoe. Over the next few years, he would sing backup and coros for such artist as Celia Cruz, Ismael Rivera, Ismael Miranda, Pellin Rodriguez, Cheo Feliciano, and Tito Nieves. Frankie recorded as lead vocalist for the group – The Bad Street Boys, the Lebron Brothers, and the Fania All Stars.

With a recommendation from Ralph Mercado, Frankie was offered Lead Singer for the orchestra of “El Rey Del Timbal”, Tito Puente. This would not only be the ultimate training program, but also the ultimate feature for Frankie Morales, as he traveled around the world with Maestro Puente, singing for people of all cultures.

Benny Bonilla
In 1965, Benny joined Pete Rodriguez, and became a stapled member of the band as its Timbalero. Prior to that, Benny had played with various bands, including Jose Budet, Eddie Palmieri, Orlando Marin, and Orquesta Novel.

Richie Bonilla
For a period of sixty years, Richie Bonilla has been a force which has contributed to the continuous growth of the Latin Music Industry. In 1962, Richie signed an unknown artist named Pete Rodriguez. As a result of his effort and constant dedication, Pete Rodriguez became the hottest recording artist of that time and was crowned “King of Boogaloo”. During that time period Richie signed another unknown artist, 17-year-old Willie Colon. Other Boogaloo/Salsa artists who had success under Richie’s guidance and management were Hector Lavoe, Ray Barretto, Ismael Rivera, Monguito El Unico, Victor Aviles, Eddie Santiago, and Frankie Ruiz.

Joe Cuba
Joe Cuba was born in Spanish Harlem. He started his musical career in 1950 and within 4 years the Joe Cuba Sextet made its debut. In 1962, Cuba recorded his first album “To Be With You”, featuring the impressive vocals of Cheo Feliciano and Jimmy Sabater, Sr. The lyrics to Cuba’s music used a mixture of Spanish and English, becoming an important part of the Nuyorican Movement. Through his recordings, he was considered one of the key architects behind the Latin Boogaloo sound. In 1966, his band scored a hit with the song “Bang Bang”.