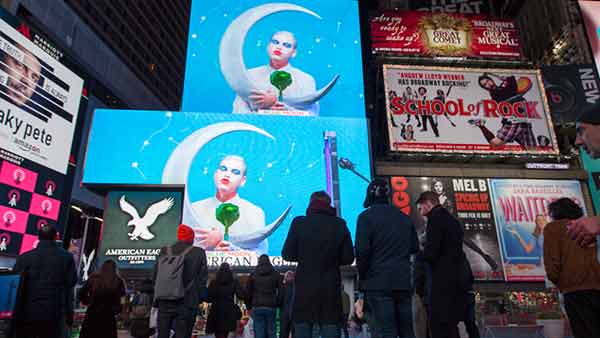 (New York, N.Y.) February 2017 – Times Square Arts presents artist Alex Da Corte’s Blue Moon on Times Square’s electronic billboards from 11:57 p.m. to midnight every night in February. Presented in partnership with the Whitney Museum of American Art on the occasion of their exhibition “Dreamlands: Immersive Cinema and Art, 1905–2016”, this project is a part of Midnight Moment, a monthly presentation by The Times Square Advertising Coalition (TSAC) and Times Square Arts.

Philadelphia-based interdisciplinary artist Alex Da Corte splashes a surreal, theatrical portrait across Times Square, featuring a man holding a crescent moon and crooning along to the classic Rodgers and Hart song “Blue Moon” as the loving and lonely lyrics appear karaoke-style at the bottom of the screen. The work features pop-art colors to brighten the winter sky, and a wry perspective on the dreams in our hearts and our prospects for finding a love of our own.

Alex Da Corte, Artist, said, “I have always liked the performance of karaoke. This is partly due to the fact that I am a poor singer and I admire this lack of talent in others as well. The karaoke stage is a perfect melting pot for the good and the bad singers of the world to be what they want to be or what they don’t want to be without recourse. It is a safe space. It is a place to access what you long for. I thought it apt to make a karaoke video for Time Square where the sound of the city would overpower any karaoke song of choice. It allows the performance to be without flaws, an ideal, an American idol….like watching someone land on the Moon.”

Tim Tompkins, President of the Times Square Alliance, said, “As our thoughts turn towards Valentine’s Day and the myriad and bizarre ways in which we express love, Alex Da Corte’s colorful, dreamlike film brings visitors to Times Square together in a moment of musing on loneliness and connection – and one which, like Times Square itself, reminds us to expect the unexpected.”

Fred Rosenberg, President of the Times Square Advertising Coalition, said,“We’re thrilled to partner with the Whitney Museum to showcase Blue Moon, a colorful piece that reflects the theatricality and creativity so intrinsic to Times Square and amplifies the experience and technology of our iconic digital screens.”

Chrissie Iles, Curator, The Whitney Museum of American Art, said, “Times Square is like a giant open-air drive-in movie house, a combination of spectacle, TV and theatre. Alex Da Corte’s Midnight Moment video introduces a dreamlike cinematic presence. The artist sings the 1934 popular ballad “Blue Moon” in a costume and background that evokes the movie theaters and stages of Times Square from the 1930s to the 1950s, at the height of the musical’s popularity, transforming cinematic spectacle into an intimate collective experience.”

The following digital screens are participating in the February Midnight Moment:

Alex Da Corte was born in Camden, New Jersey, in 1980. He received a Bachelor of Fine Arts from the University of the Arts, Philadelphia, and a Master of Fine Arts from the Yale University School of Art. His survey exhibition “Free Roses” is currently on view at MASS MoCA, North Adams. Other recent solo exhibitions include “A Man Full Of Trouble” at Maccarone Gallery, New York, NY; “50 Wigs” at the Herning Museum of Contemporary Art, Herning, DK and ”A Season in He’ll” at Art + Practice, Hammer Museum, Los Angeles (all 2016.) Da Corte’s work “Easternsports” with Jayson Musson is included in the group exhibition “Dreamlands: Immersive Cinema and Art, 1905–2016” at the Whitney Museum of American Art, New York. Past group exhibitions include the Louisiana Museum of Modern Art, Humlebæk, DK; the 13th Biennale de Lyon, Lyon, FR.

The Whitney Museum of American Art, founded in 1930 by the artist and philanthropist Gertrude Vanderbilt Whitney (1875–1942), houses the foremost collection of American art from the twentieth and twenty-first centuries. Mrs. Whitney, an early and ardent supporter of modern American art, nurtured groundbreaking artists at a time when audiences were still largely preoccupied with the Old Masters. From her vision arose the Whitney Museum of American Art, which has been championing the most innovative art of the United States for more than eighty years. The core of the Whitney’s mission is to collect, preserve, interpret, and exhibit American art of our time and serve a wide variety of audiences in celebration of the complexity and diversity of art and culture in the United States. Through this mission and a steadfast commitment to artists themselves, the Whitney has long been a powerful force in support of modern and contemporary art and continues to help define what is innovative and influential in American art today.