New York, New York — Bloomingdale School of Music (BSM) is pleased to present BEETHOVEN VIOLIN SONATAS a concert demonstrating the contrasting sides of Beethoven’s musical genius. This free community concert on Friday, April 28, 2917 begins at 7 pm and will be held at the David Greer Recital Hall at the school’s home site located at 323 West 108th Street (off of Broadway) in Manhattan. Admission is FREE and seating is limited.

Violinist Rolf Schulte and BSM faculty pianist Judith Olson perform two distinctly different Beethoven Sonatas: the dramatic and passionate Sonata in C minor, Op. 30, No. 2, and the gentler, more intimate Sonata in G Major, Op. 96.  The C minor Sonata was written during a period of extraordinary distress for the composer as he was forced to accept the inevitability of his deafness.  The G Major Sonata contains many characteristics of Beethoven’s late style:  a heartfelt slow movement derived from the simplest materials; a sharply-focused and almost brusque scherzo; and a theme-and-variation finale of unusual structure and complexity.

JUDITH OLSON, Pianist – Bloomingdale School of Music faculty member pianist Judith Olson, is a graduate of The Juilliard School, and made her New York debut with Alexander Schneider conducting Walter Piston’s Concertino.  She has since toured North, Central, and South America, Europe, the Middle East, and Korea as soloist and in collaboration with leading instrumentalists, including Kyung Wha Chung, Eugene Fodor, Miriam Fried, Joseph Fuchs, Daniel Heifetz, Jean-Jacques Kantorow, Nathan Milstein, and Tossy Spivakovsky. A versatile artist, she has performed Beethoven at Bard, Rachmaninoff at Newport, and has appeared as soloist on numerous new music series in New York, including Composers Collaborative and Composers Concordance. She is the dedicatee of works by Otto Luening, William Mayer, Ned Rorem and Olav Anton Thommessen, and she has recorded for Albany, Capstone, Newport Classics, MMO Laureate Series, and RCA.  She has appeared at major halls including Avery Fisher Hall, Alice Tully Hall, and the Kennedy Center, and has participated in the festivals of Ankara, Bard, Bar Harbor, Capri, Caramoor, Chautauqua, Killington, and Newport. She is currently recording the solo piano music of jazz composer Ed Bland for Cambria Records.

ROLF SCHULTE, VIOLINIST – German-born Rolf Schulte, whom The New Yorker has called “one of the most distinguished violinists of our day,” started playing the violin at age five under his father’s tutelage. He later studied with Kurt Schäffer at the Robert Schumann Conservatory in Düsseldorf, attended Yehudi Menuhin’s summer course in Gstaad, Switzerland, and studied with Franco Gulli at the Accademia Chigiana in Siena before moving to the United States to study with Ivan Galamian at The Curtis Institute of Music in Philadelphia. At age 14, he made his orchestral debut with the Philharmonia Hungarica in Cologne, playing Mendelssohn’s Concerto.

Among the works Schulte has premiered are Donald Martino’s Violin Concerto, Tobias Picker’s Concerto with the American Composer’s Orchestra at Lincoln Center (recorded by CRI), Milton Babbitt’s The Joy of More Sextets at the Library of Congress (New World Records), Mario Davidovsky’s Synchronisms No. 9 at M.I.T. (Wergo), and Elliott Carter’s Fantasy at Harvard. American premieres include György Kurtág’s Kafka Fragments at Tanglewood, Poul Ruder’s Violin Concerto No. 1 (Bridge Records), and Elliott Carter’s Riconoscenza per Goffredo Petrassi. Mr. Schulte has appeared with the Chamber Music Society of Lincoln Center and the 1990 Kuhmo Music Festival in Finland. His numerous recital performances include the cycle of ten Beethoven sonatas at Harvard, Dartmouth, and Middlebury colleges, and the complete violin works of Igor Stravinsky at the 92nd St. Y and Berliner Festwochen, among other places. From 1999-2001 Rolf Schulte held a residency at Harvard University during which he presented new works by Carter, Donald Martino (Romanza), and Milton Babbitt (Little Goes a Long Way).

His long and distinguished discography includes recordings of Arnold Schoenberg’s Violin Concerto with the London Philharmonia (Koch International, re-issued on Naxos), Robert Schumann’s Works for Violin and Piano (Centaur Records), and several pieces of Elliott Carter: Duo and Riconoscenza, the Violin Concerto (with the Odense Symphony) and Four Lands (all on Bridge Records). Recent recordings include the Schönberg Phantasy, Op. 47 and String Trio Op. 45 (Naxos, nominated for a 2010 Grammy award). Mr. Schulte performs on a 1780 violin made by Lorenzo Storioni, Cremona.

Now in its 52nd year, BSM has served more than 80,000 children and adults through group classes, private instruction, and performance opportunities in classical, jazz, and rock music. Each week, over 650 students of all ages participate in a wide range of music making, including early childhood classes, a comprehensive pre-college program, free community concerts, and internet-based music programs. With accessibility central to its mission, more than 20% of Bloomingdale’s student body receives financial aid and scholarship assistance annually. For more information on Bloomingdale School of Music’s programs and concerts, visit www.bsmny.org, call the office at 212-663-6021, or email [email protected] 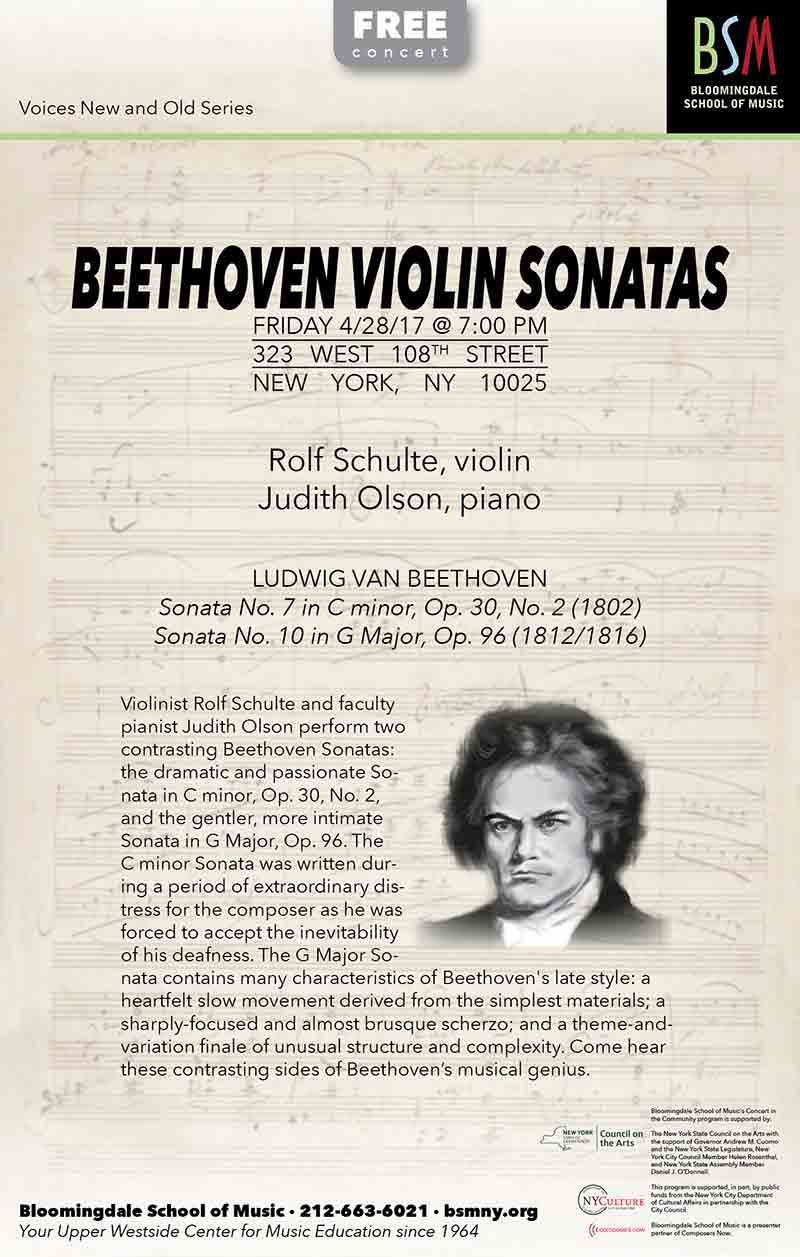