Returns to Lincoln Center with the World Premiere of 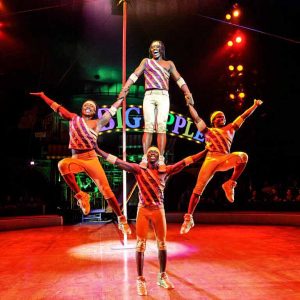 New York, NY (August 31, 2015) – Big Apple Circus returns to the Big Top at Lincoln Center for the company’s 38th season with the World Premiere of its all-new show, The Grand Tour! Tickets start at $25, and the show runs from October 21, 2015 to January 10, 2016. To purchase tickets or for more information, visit www.bigapplecircus.org.

The Grand Tour transports audiences to the Roaring 1920s, the advent of the modern travel era, when the most adventuresome began to tour the world in ships, planes, trains, and automobiles. With every seat less than 50 feet from the stage, audiences will be awed by the world-class entertainers as they perform breathtaking acts from the four corners of the globe. Clowns, jugglers, acrobats, and aerialists from Africa, Asia, Australia, Europe, and North and South America appear with ponies, puppies and more; the troupe sets off on their own whirlwind adventure, accompanied by the live, seven-piece Big Apple Circus Band at each of more than 100 performances.

“There’s no shortage of thrills.Fun for all!” – New York Post