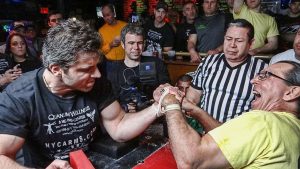 Flushing, New York April 6, 2015 –The New York Arm Wrestling Association (NYAWA) announced today that on Sunday, May 3, at 1 PM, Cheap Shots Sports Bar (149-05 Union Turnpike Flushing, NY 11367 will host the City’s premiere arm wrestling title event: The 38th Annual NYC Big Apple Grapple International Arm Wrestling Championships and Crowning of the King and Queen of Arms®. Entry fees are $25 for amateurs and masters 45+ and 55+ years-old, $35 for pros and $15 for women. Competition is open to the public, age 18 years and older, and is divided into right and left hand weight classes for men and women, in both amateur and pro categories. Spectator admission is $5.00 and the proud sponsors are Ironmind.com, Captains of Crush Grippers, Cheap Shots Sports Bar and the New York Arm Wrestling Association.

More than 100 male and female athletes are expected to participate in this event; coming locally from the five NYC Boroughs, Long Island and tri-state area; and from as far away as Canada, Puerto Rico and Russia. Among those expected to take part are the current Empire State Champions and last year’s defending NYC Big Apple Grapple Champions.

First, second and third place winners will receive large custom engraved, 4-dimensional designed; gold, silver or bronze medallions and official NYAWA seal-stamped certificates. The overall strongest right handed male and female will be crowned King and Queen of Arms.  A $150 cash prize will be awarded to the right and left handed male overall winners and the women winners receive a $50 cash prize. Teams will also compete, grouped by Borough, State, and Country, with a point tally to determine the winning team and trophy award.

“The NYC Big Apple Grapple International is the premiere arm wrestling championship in NYC and ‘King and Queen of Arms’ is one of the worlds’ most sought after titles, said Gene Camp, founder and president of the NYAWA. Camp continued, “This event will draw both veteran ‘hard-nosed pros’ and first time beginners, all competing in their respective weight class categories,” “We expect a cheering, captive audience and a daylong contest of awesome feats of brute strength, exhausting endurance, merciless   demonstrations of power and explosive raw energy. This exciting Annual Ceremonial Tradition honors the ‘King and Queen of Arms®’ with full royal gold crowns and robes.”