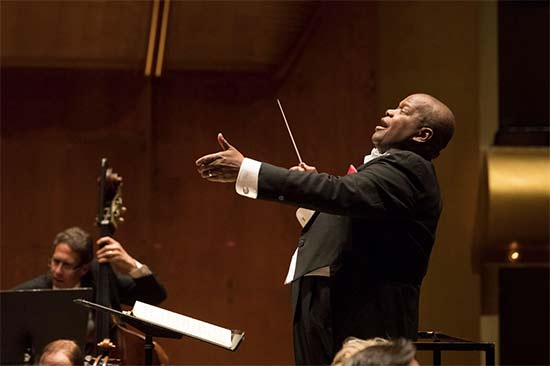 National Chorale, New York’s premier professional choral company, under the Artistic Direction of Everett McCorvey, continues its 2017-2018 Season at Lincoln Center with Beethoven Symphony #9 on Friday, April 13, 2018 at 8pm at the David Geffen Hall at Lincoln Center for the Performing Arts, 10 Lincoln Center Plaza, NYC. Tickets are $30-$100 and are available at www.nationalchorale.com, or by calling (212) 333-5333.

The Symphony No. 9 is in the traditional 4-movement form, but there is nothing traditional about the work’s size and complexity or the unexpected addition of a chorus to the final movement. In four movements, it is scored for solo vocal quartet, chorus, strings, flutes, piccolo, oboes, clarinets, bassoons, contrabassoon, horns, trumpets, timpani and percussion. The last movement recapitulates themes from the first three, making it a small symphony in itself, and the inspired setting of parts of Schiller’s Ode to Joy make it marvelously unique in the symphonic literature.

Ludwig van Beethoven (1770-1827) began his musical studies in his native Bonn, with Christian Gottlob Neefe, who used the works of Bach as composition manuals for his uniquely gifted student. He recommended that Beethoven study with Mozart, but when he moved to Vienna in 1792, Mozart was dead and he studied, instead, with Franz Josef Haydn and Antonio Salierei, two of the most famous composers of their time.  In a composing career encompassing a great variety of works, Beethoven used the complexities he had learned from Bach and the musical forms perfected in the late 18th century by Mozart and Haydn to move into a new 19th-century realm – one which ensures his place in the world’s pantheon of great composers.

Beethoven’s symphonic works reshape, in startlingly original ways, the traditional techniques he inherited from the 18th century, pushing compositional and performance boundaries further, and giving the orchestra a new and increasingly dramatic role. There is nothing abstract in Beethoven’s music: it reflects a complex, contradictory universe and a very beautiful and personal one, and nowhere is this more evident than in his Symphony No. 9.

He began sketches for the 9th Symphony in 1815, but the final shape and content took nearly 10 years to mature. In 1823 he contacted the London Philharmonic Society to see if it would commission a new symphony: the Society offered him L50 for an “unpublished” work, allowing him to premiere it in Vienna. By early 1824 it was complete, and the Viennese premiere took place on May 8, 1824.

By 1824 he was profoundly deaf and unable to hear the performance or the thunderous ovation it received. It seems to have been a scratchy performance: the orchestra, a combination of theater orchestra professionals and amateurs, had difficulty learning the score, and, in performance, some actually stopped playing when the parts became too difficult. Vocal soloists complained of the tessitura and difficulty of the work, and apparently transposed high entrances down or did not sing them at all. The composer, immersed in his score, was unaware of this:, hearing, in his own way, the extraordinary contribution he had made to the choral-orchestral repertoire.