“Over seventy years ago, Frank Lloyd Wright sketched a room to be built under the Guggenheim. People seem to think it’s a theater. In actuality, it’s a set Wright prophetically designed for the sci-fi cosplay house-music ballet-battle that fell into my mind the moment I saw the space. The Peter B. Lewis Theater will realize its destiny in my piece Battleground.” – Ryan McNamara 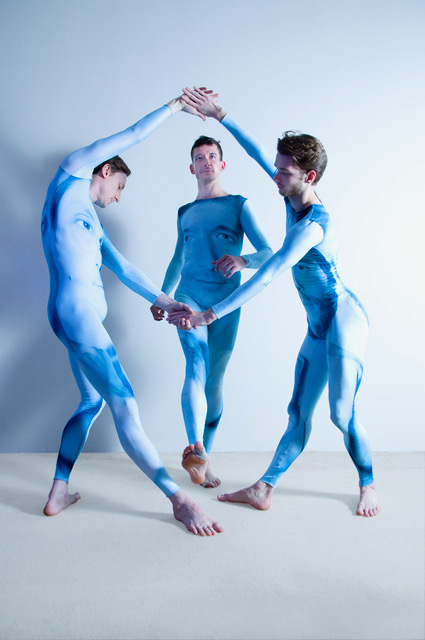 Following the sold-out premiere of Battleground in 2016, Works & Process, the performing arts series at the Guggenheim, presents an encore of this “Cosplay-Battle-Ballet” on January 10-12, 2017 at 7:30pm. During a rare residency opportunity that spanned five months, McNamara created a one-of-a-kind work made in and for the unique architecture of the Guggenheim’s Peter B. Lewis Theater. Audience members act as embedded witnesses to the three dance squads battling for dominance in each of the space’s three zones: the Red Choir Loft, the Green Balcony, and the Blue Stage.

Cast of collaborators include:

Works & Process is pleased to announce two of its recent commissions, Battleground by Ryan McNamara and NEW BODIES by Jodi Melnick, will be available for touring in 2018 and onwards. One of Sixty-Five Thousand Gestures – a solo Melnick co-choreographed with Trisha Brown – will be added to the NEW BODIES bill. To inaugurate this touring initiative, Works & Process will present encore performances of these two programs at the Guggenheim in January 2018.

Originally trained in photography and sculpture, Ryan McNamara’s practice has grown to include a wide array of performative actions, from covert solo pieces to large-scale theatrical productions. The detritus of these performances is then used as raw material for his object-based work. For his 2010 exhibition Introducing Ryan McNamara, he displayed personal items at Elizabeth Dee Gallery and gave customized tours of his life to audience members. In 2010, as part of MoMA PS1’s “Greater New York” survey, McNamara performed Make Ryan a Dancer, in which he publicly submitted to dance lessons from a wide range of instructors, practicing through the museum’s corridors, galleries, courtyard, and café. After, McNamara taught museum visitors to dance in a curious continuation and involution of the teacher-student/performer-spectator relationship.

McNamara’s work and performances have been shown at the Whitney Museum of American Art, MoMA PS1, Kunstmuseum Bonn, and The Garage Moscow, and is held in the collection of the Whitney Museum of American Art, New York and the Museum of Modern Art, New York. He is the recipient of a Foundation for Contemporary Arts grant (2011) and the biannual Malcolm McLaren award (2013) for his ME3M: A Story Ballet About the Internet.