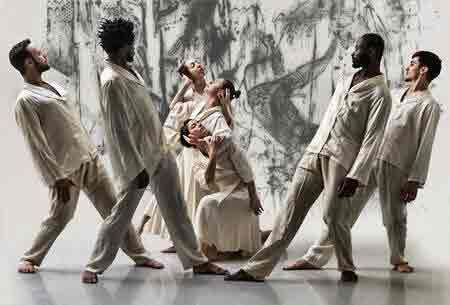 Battery Dance presents its 41st Annual New York Season on Wednesday, May 10 and Thursday, May 11, 2017 at 7:30pm at The Schimmel Center at Pace University, 3 Spruce Street, NYC.  Tickets are $25 and are available athttp://tickets.batterydance.org. An Opening Night Reception will follow the performance on May 10; tickets start at $250 and are available athttp://openingnight.batterydance.org.   A free School Matinee Performance will take place on May 11 at 2pm (for school groups only); tickets are available by emailing [email protected].  On May 11, the evening performance will include a pre-performance talk at 6:30pm:  “The Role of the Arts as a Vehicle for Public Diplomacy” by Cornell University Professor Dr. Penny von Eschen, with an introduction by AFS-USA President Jorge Castro.

The artistry that has propelled Battery Dance into international prominence and its passionate social activism will merge as the Company unveils five new works in its 41st Annual New York Season at Schimmel Center. With the presence of dancers from Iraq and Romania on stage and the joining of creative forces with an Armenian-Syrian visual artist and Syrian and Tunisian composers, the Company’s collaborative spirit is boosted to an all-time high.

“On recent tours of Europe, Africa, South and East Asia and the American Midwest, we have seen the power of dance to bring people together and to express emotions that cannot be touched by words alone,” said Jonathan Hollander, artistic director of Battery Dance. “Within the fabric of our own work, we benefit from the diverse backgrounds and stories of our artists who constantly gain from the interchange of cultures from within and without.  Never before have we had an array as varied as are present in the new works being presented in our New York Season.”

Reflecting his company’s engagement with refugees and youth in conflict zones over the past decade, Jonathan Hollander has assembled artistic forces that pair the Company’s brilliant ensemble of dancers with Kevork Mourad and Kinan Azmeh, Syria-born visual artist and musician respectively; Tunisian composer Anouar Brahem; and Iraqi dancer Hussein Smko, first recipient of the Company’s Adel Euro Campaign for Dancers Seeking Refuge. This powerful collaboration yields choreography, visual imagery and music that pulsates with the life-force of refugees who overcome staggering odds to reach safety and promise in new lands, while mourning lost family and community members, perished dreams and destroyed homelands. Guest artists Kevork Mourad will participate in the performances by making art that is projected onto the stage as the dance transpires, creating an immersive environment that is enhanced by the lighting design of Barry Steele.

Following the pattern it established in 2011 with Autobiographica and continued in 2013 with Perceptual Motion, Battery Dance unleashes the choreographic talents of its dancers in the creation of a new ensemble work with segments spearheaded by each Company member. The group Matmos created an album sampled from reenactments of battles from The American Civil War and it is against this “musical” background that Company members express their responses to living in the current chaotic political environment. Each dancer has chosen a unique cut from the album and their movements are kinetic, athletic, fast-paced and visceral.

Channeling the talents of two young male dancers, Hussein Smko from Iraq and Razvan Stoian from Romania, Battery Dance’s own Sean Scantlebury crafts a propulsive duet evoking imagery of wrestlers, gladiators, compatriots, competitors and brothers. Recently, Scantlebury was honored to be included in Dance.com’s “15 Black Dancers Who Are Changing the World,” second only to Misty Copeland.

The sculptures of Romanian artist Constantin Brancusi and the heritage of his native land are reflected in this solo work by the award-winning young choreographer/dancer Razvan Stoian, the newest member of Battery Dance.

Chants, gesture and movement combine in this evocative solo that references the land, traditions and culture of the Kurdish region of Iraq, created and performed by Hussein Smko, the first recipient of Battery Dance’s Adel Euro Campaign for Dancers Seeking Refuge.

Public Funds have been provided by the New York City Department of Cultural Affairs in Partnership with the City Council, Student Matinee Sponsor – The Pierre and Tana Matisse Foundation, Adel Euro Campaign Sponsor: The Rubin Foundation

Battery Dance created its outdoor festival in 1982 as part of its service to the downtown community in which it has been based for 40 years.  As one of America’s leading cultural ambassadors, Battery Dance connects the world through dance. The Company pursues artistic excellence and social relevance by creating vibrant new works, performing on the world’s stages, presenting dance in public spaces, serving the field of dance and teaching people of all ages with special attention to the disadvantaged and areas of conflict. Battery Dance is committed to enhancing the cultural vibrancy of its home community in New York City, extending programming throughout the U.S., and building bridges worldwide through international cultural exchange with programs in 65 countries to date. www.batterydance.org

About the Schimmel Center

About the GUEST VISUAL ARTIST

Kevork Mourad was born in 1970 in Kamechli, a town in the upper reaches of Syria.  Of Armenian origin, he received his MFA from the Yerevan Institute of Fine Arts in Armenia, and he now lives and works in New York. With his technique of spontaneous painting, where he shares the stage with musicians-a collaboration in which art and music develop in counterpoint to each other-he has worked with many world class musicians. He now implements that same technique with dancers in Battery Dance’s “On Foot”. He is a member of Yo-Yo Ma’s Silk Road Ensemble. He has performed at the Brooklyn Museum of Art, The Bronx Museum of Art, the Rhode Island School of Design, the Art Institute of Chicago, the Rubin Museum of Art, Lincoln Center Atrium, the American Museum of Natural History, the Metropolitan Museum of Art, National Sawdust, and Central Park’s Summerstage with the Silk Road Ensemble.www.kevorkmourad.com.