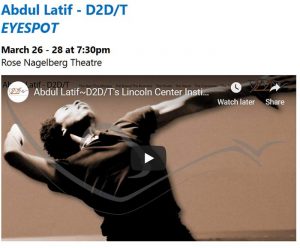 Initiated in 2013 and underway with its next stage of producing, Abdul Latif – D2D/T is a New York based urban-contemporary dance entity dedicated to the creation of original works by Abdul Latif and nurturing the careers of young artists, while stimulating the imagination of diverse audiences through collaborative partnerships.

Latif’s breakout work was a commission as part of the 2015 Joffrey Ballet/Winning Works Concerts. An inaugural Lincoln Center Education Artist-in-Residence at Lincoln Center Institute, Latif has also been awarded the Rockefeller Brothers Fund Fellowship. Following his Lincoln Center Institute residency, Latif received the Chicago Winning Works Prize and the National Capezio ACE Finalist Award. Latif premiered his 2015 commission, A Year From Now Ago, at the Museum of Contemporary Art Chicago, in concert with his full-length work, 20/20. In 2017, MATCH[ed]-Latif’s first choreography and visual arts installation, supported by Gallery 151, Wallplay and Alfa Development and premiering at the Fire Island Dance Festival with Glenn Allen and Línda Celeste Sims (Alvin Ailey). In 2018, commissioned for The Joyce Theater Ballet Festival, Latif created Alas~ for the Ashley Bouder Project, performed by dancers of New York City Ballet. Latif is currently a Center for Ballet and the Arts at NYU 2019 – 2020 Fellow.

This program is supported by the CUNY Dance Initiative (CDI), a program that opens the doors of CUNY campuses to professional choreographers and dance companies. CDI receives major support from the Howard Gilman Foundation and the Mertz Gilmore Foundation. Additional support is provided by the Jerome Robbins Foundation, the SHS Foundation, the Harkness Foundation for Dance, and Dance NYC’s New York City Dance Space Subsidy Program, made possible by the Andrew W. Mellon Foundation. CDI is spearheaded and administered by the Kupferberg Center for the Arts at Queens College.  www.cuny.edu/danceinitiative

Baruch Performing Arts Center is an acclaimed performing arts presence. Located in the heart of Manhattan just east of Chelsea and the famed flatiron building, BPAC presents renowned classical music, opera, jazz, theater, dance, discussion, film, and innovative cross-genre programming. BPAC has presented over 1,000 cultural programs in its 5 spaces since 2003. Its curated season of 30 programs annually emphasizes new work experienced in intimate settings, the diversity of American culture as exemplified by Baruch students (who come from 130 different countries) and work that lives at the confluence of art and social justice.