The Tallest Tree in the Forest 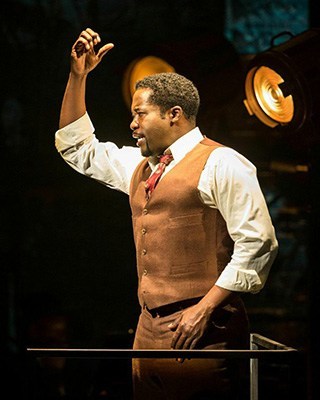 BAM presents The Tallest Tree in the Forest, Daniel Beaty’s one-man  show about Paul Robeson, Mar 22-29.  Daniel Beaty gives a tour-de-force performance, playing up to 40 characters in The Tallest Tree in the Forest, a solo play, which he also wrote. It tells the life story of Paul Robeson, a towering figure among our nation’s prominent African-Americans. Renowned director Moisés Kaufman returns to BAM (The Laramie Project, 2013 Winter/Spring) to direct this show which has delighted and enlightened audiences from Kansas City, to LA, La Jolla, and Washington, DC. For ticket information, call BAM Ticket Services at 718.636.4100, or visit BAM.org.

Born in New Jersey to a father who was a freed slave, Robeson (1898-1976) rose from humble beginnings to become a Broadway star and international celebrity. Best known for playing “Joe” in the ground-breaking musical Show Boat (making “Ol’ Man River” one of the most celebrated show-tunes), he was also a scholar, athlete, activist, attorney, and an icon of the civil rights movement, whose career crumbled during the McCarthy era as questions arose about his Communist associations.

Employing Beaty’s swift vocal and character transformations, monologues, narrative scenes, music, poetry, and video, the production explores the evolution of Robeson’s career. It shows his humanity and courage, but does not shy away from his complicated character, including his marital infidelity and the controversy surrounding Show Boat.