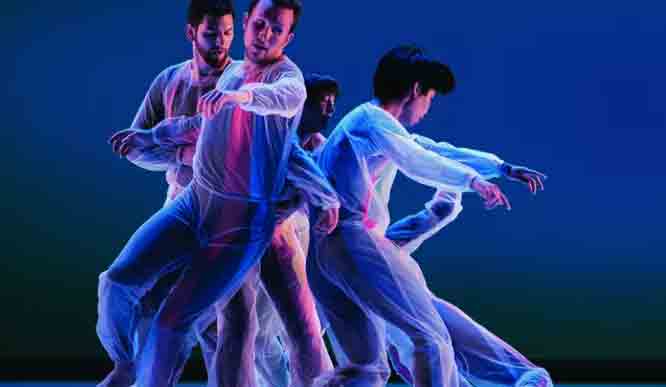 Bloomberg Philanthropies is the Season Sponsor

Brooklyn, NY– Doug Varone and Dancers return to BAM to celebrate 30 years of visionary work with three dances representing the past, present, and future of the company. The program comprises a revival of the Philip Glass-scored Possession (1994) and the New York premieres of ReComposed (2015) and Varone’s latest work, Folded (2016).

Possession, inspired by A.S. Byatt’s century-spanning novel of the same name, is set to Glass’ beautiful Concerto for Violin and Orchestra. Eight dancers, in duets, explore the facets of relationships, as the emotional and physical balance of the work shifts between each pair. ReComposed is a whirlwind of color and careening movement, inspired by the pastel paintings of abstract expressionist Joan Mitchell and set to Michael Gordon’s propulsive Dystopia. Folded, an intimate duet set to a score by MacArthur Fellow Julia Wolfe, explores the questions and contradictions inherent in our personal beliefs and faiths.

Award-winning choreographer and director Doug Varone works in dance, theater, opera, film, and fashion. His work is known for its emotional range, kinetic breadth and the diversity of genres in which he works. Commissions include the Limón Company, Hubbard Street Dance Chicago, Rambert Dance Company (London), Martha Graham Dance Company, Dancemakers (Canada), Batsheva Dance Company (Israel), Bern Ballet (Switzerland) and An Creative (Japan), among others. In addition, his dances have been staged on more than 75 college and university programs around the country. He has staged multiple premieres and new productions for the Metropolitan Opera, Minnesota Opera, Opera Colorado, Washington Opera, New York City Opera, and Boston Lyric Opera, among others. His productions at the Metropolitan Opera include Salome, the world premiere of Tobias Picker’s An American Tragedy, Stravinsky’s Le Sacre du Printemps, and Hector Berloiz’s Les Troyens. His theater credits include choreography for Broadway and off-Broadway, including the MASTERVOICES production of Dido and Aeneas at NY’s City Center and Manhattan Theatre Club’s Murder Ballad. Varone received his BFA from Purchase College where he was awarded the President’s Distinguished Alumni Award in 2007. Numerous honors and awards include a Guggenheim Fellowship, an OBIE Award (Lincoln Center’s Orpheus and Euridice), the Jerome Robbins Fellowship at the Boglaisco Institute in Italy, two individual Bessie Awards, three American Dance Festival Doris Duke Awards for New Work, and four National Dance Project Awards. In 2015, he was awarded both a Doris Duke Artist Award and the Lifetime Achievement Award from the American Dance Guild. He is currently on the faculty at Purchase College, where he teaches composition and choreography.