A CONTEMPORARY BALLET WITH 25 DANCERS 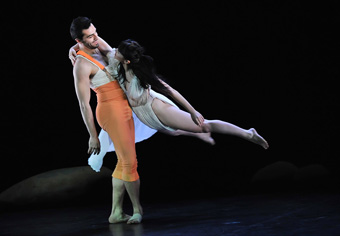 (NEW YORK, NY) The Joyce Theater Foundation (Linda Shelton, Executive Director) is proud to present the New York premiere of Ballet Preljocaj’s widely praised production of Snow White, with choreography by Angelin Preljocaj at the David H. Koch Theater.  This international eventwill only be in New York City for six performances, from April 23 – 27, 2014.  Preljocaj’s Snow White marks the third Joyce Theater presentation in as many years at Lincoln Center’s David H. Koch Theater, following the acclaimed 2012 engagement of Sylvie Guillem in 6000 miles away and last year’s spectacular appearance by The Netherlands Dans Theater.  Tickets for Snow White go on sale Monday, November 25 at 10am and can be purchased online at www.DavidHKochTheater.com or by calling (212)-496-0600.

For his Snow White, Angelin Preljocaj – the renowned French choreographer who created a new work for New York City Ballet earlier this fall and whose company, Ballet Preljocaj, recently completed a successful season at the Brooklyn Academy of Music – draws upon the Brothers Grimm telling of the story, rather than the 1937 Disney animated film.  In creating the darker world of mystery, magic and beauty depicted in the original version, Preljocaj focuses his story on the wicked stepmother’s narcissistic determination to maintain her beauty and ability to seduce despite her advancing age.  In this provocative and engrossing contemporary ballet, performed by the 25 extraordinary dancers of Ballet Preljocaj, love, jealousy and the challenges of aging are explored in compelling, sometimes disturbing ways that Disney might never have imagined.  With a score of selections from several symphonies by Gustav Mahler interspersed with contemporary electronic music, this magnificent production includes set designs by Thierry Leproust and costume designs by the celebrated fashion designer Jean Paul Gaultier, whose work is currently on exhibit at the Brooklyn Museum.

Since its world premiere in 2008, Snow White has received standing ovations and rave reviews at London’s Sadler’s Wells, LA’s Dorothy Chandler Pavilion and The Kennedy Center in Washington D.C., among others.  Now, with this premiere, The Joyce Theater proudly offers New York audiences the opportunity to experience Angelin Preljocaj’s eagerly anticipated, mesmerizing production.

Performances of Angelin Preljocaj’s Snow White, presented by The Joyce Theater, are April 23 – 27 as follows: Wednesday and Thursday at 7:30pm; Friday at 8pm; Saturday at 2pm & 8pm; Sunday at 2pm.  Tickets, ranging in price from $25-$125, go on sale Monday, November 25 at 10am and can be purchased online at www.DavidHKochTheater.com or by calling (212)-496-0600.  Please note, prices are subject to change.  For more information, please visit www.Joyce.org.

Born in Paris, Angelin Preljocaj began studying classical ballet before turning to contemporary dance, which he studied with Karin Waehner.  In 1980, he went to New York to work with Zena Rommett and Merce Cunningham, after which he resumed his studies in France, where his teachers included the American choreographer Viola Farber and the French choreographer Quentin Rouillier.  He then joined Dominique Bagouet before founding his own company in December 1984.  Angelin Preljocaj collaborates regularly with other artists such as Enki Bilal (Roméo et Juliette, 1990), Goran Vejvoda (Paysage après la bataille, 1997), Air (Near Life Experience, 2003), Granular Synthesis (“N”, 2004), Fabrice Hyber (Les 4 saisons…, 2005), Karlheinz Stockhausen (Eldorado – Sonntags Abschied, 2007), Jean Paul Gaultier (Snow White, 2008), Constance Guisset (Le funambule, 2009), Claude Lévêque (Siddharta, 2010) and Laurent Garnier and Subodh Gupta (And then, one thousand years of peace, 2010).  His productions are now part of the repertoire of several companies, many of which also commission original productions from him, notably La Scala of Milan, the New York City Ballet and the Paris Opera Ballet.  Film work include several short and full-length, most notably Un Trait d’Union and Annonciation (1992 and 2003), for which he was awarded the “Grand Prix du Film d’Art” in 2003, the “Vidéo-Danse” First Prize in 1992 and the Prague Video Festival Prize in 1993.  Throughout his career, Preljocaj has received numerous awards, including the “Grand Prix National de la Danse” awarded by the French Ministry of Culture in 1992, the “Benois de la danse” for Le Parc in 1995, the “Bessie Award” for Annonciation in 1997, “Les Victoires de la musique” for Roméo et Juliette in 1997 and the “Globe de Cristal” for Snow White in 2009.  He is an “Officier des Arts et des Lettres” and a “Chevalier de la Légion d’honneur,” and he was appointed an “Officier de l’ordre du Mérite” in May 2006.  Since October 2006, Ballet Preljocaj and its dancers have resided at the Pavillon Noir in Aix-en-Provence, a building entirely dedicated to dance, with Angelin Preljocaj as its artistic director.

The Joyce Theater Foundation, a non-profit organization, has proudly served the dance community and its audiences for three decades. The founders, Cora Cahan and Eliot Feld, acquired and renovated the Elgin Theater in Chelsea, which opened as The Joyce Theater in 1982. The Joyce Theater is named in honor of Joyce Mertz, beloved daughter of LuEsther T. Mertz. It was LuEsther’s clear, undaunted vision and abundant generosity that made it imaginable and ultimately possible to build the theater. One of the only theaters built by dancers for dance, The Joyce Theater has provided an intimate and elegant home for more than 320 domestic and international companies. The Joyce has also commissioned more than 130 new dances since 1992. In 1996, The Joyce created Joyce SoHo, a dance center providing highly subsidized rehearsal and performance space to hundreds of dance artists, as well as special residency opportunities for selected choreographers to support the creation of new work. In 2009, The Joyce opened Dance Art New York (DANY) Studios to provide affordable studios for rehearsals, auditions, classes, and workshops for independent choreographers, non-profit dance companies, and the dance/theater communities. New York City public school students and teachers annually benefit from The Joyce’s Dance Education Program, and adult audiences get closer to dance through pre-engagement Dance Talks and post-performance Dance Chats. The Joyce Theater now features an annual season of approximately 48 weeks with over 340 performances for audiences in excess of 135,000.