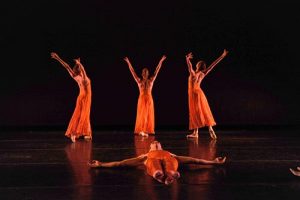 New York, NY, May 13, 2015 – Ballet NY will present the world premiere of What Ever, choreographed by Medhi Bahiri, as well as works by John Butler, William Forsythe and Stanton Welch, July 9 – 11 at Ailey Citigroup Theater, 405 West 55th Street (at 9th Avenue).

Ballet NY was founded in 1997 and made a successful New York City debut at The Joyce Theater in 1999. Since then, the Company has had twelve critically acclaimed seasons in a variety of NYC theaters and continues to do so annually, offering its New York audiences consistently exciting programs. Ballet NY has toured domestically to over 15 states as well as internationally to Canada and Mexico.  Over the years, Ballet NY has commissioned new works by over 20 emerging choreographers and acquired ballets by renowned choreographers such as George Balanchine, Peter Martins, Agnes DeMille, Antony Tudor, William Soleau and Jodie Gates, among others.

Foremost in Ballet NY’s mission is to offer emerging choreographers the opportunity to create new works on accomplished dancers.  The Company is also committed to keeping ticket prices affordable in an effort to attract, cultivate and educate new audiences for dance.

Medhi Bahiri, Co-Artistic Director/Choreographer, brings a wide and diverse background in dance to his position. He was a Principal Dancer with Ballet West and Boston Ballet and a member of Maurice Bejart’s Twentieth Century Ballet. As Principal Guest Artist, he has appeared with many national international ballet companies. Mr. Bahiri won the First Prize of the Prix de Lausanne dance competition, and was recognized for his outstanding artistic achievement and original style at the International Ballet Competition in Varna, Bulgaria. As a non-competitor he was distinguished as Best Partner at the Jackson and Tokyo ballet competitions.

Judith Fugate, Co-Artistic Director/Repetiteur, is a former Principal Ballerina with the New York City Ballet and danced roles in virtually every ballet in the NYCB repertoire, counting among her partners Peter Martins, Mikhail Baryshnikov and Helgi Tomasson.  She toured extensively with groups led by renowned artists such as Mr. Baryshnikov, Cynthia Gregory and Mr. Martins. Miss Fugate appeared on “Live from Lincoln Center” with Ray Charles in Peter Martins’ A Fool for You. In the Metropolitan Opera’s production of La Traviata, conducted by Placido Domingo, she was partnered by Fernando Bujones and Peter Boal. She left the company in 1997 and currently works as repetiteur for the George Balanchine Trust and the Jerome Robbins Rights Trust, staging these renowned choreographers’ works worldwide.