Tickets are $28-$58 for evening performances and $15 for Saturday en Familia. Tickets are available online now at Ticketmaster.com, by phone at (800) 745-3000, or in person at the Apollo Theater Box Office at 253 W. 125th Street, NYC. For more information, visit www.ballethispanico.org. 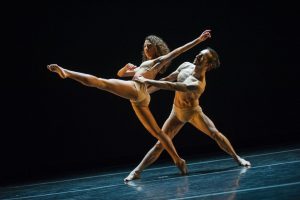 Ballet Hispanico and the Apollo Theater are partnering to co-commission a world premiere by Brazilian native Fernando Melo, praised by the Chicago Tribune as possessing a “highly theatrical dance vision, tantalizing in its mild surrealism and fun to watch.” His as-yet-untitled work is choreographed to a live medley of Brazilian percussive and acoustic sounds, and explores Melo’s homeland-a land of soccer, samba and sensuality but also inequality and disorder-with abstract and poetic subtlety. The premiere at the Apollo will mark the first time Melo’s work is presented in New York.

“I’m delighted to be partnering with the Apollo Theater to introduce New York audiences to the work of Fernando Melo, a stunningly gifted choreographic voice whose work will be an inspiring look at contemporary Brazil,” said Eduardo Vilaro, Artistic Director of Ballet Hispanico. “The decision to enhance our season with added performances and low-cost offerings for the whole family speaks to our commitment to the cultural mecca that is the Apollo and the larger Harlem community.”

“We are thrilled to have Ballet Hispanico back at the Apollo this year and to extend the relationship into even more of a partnership,” said Mikki Shepard, Apollo Executive Producer. “African American and Latin American culture have long been paired in innovative ways at the Apollo, fostering new experimentation and stylistic mixing. And though music has always been at the core of the Apollo’s mission, dance has also always been a vibrant part of the Theater’s rich legacy. We continue to celebrate that legacy through collaborations with esteemed companies such as Ballet Hispanico.”

An absorbing exploration of identity, Sombrerísimo references the surrealist world of the Belgian painter René Magritte, famous for his paintings of men in bowler hats. This athletic work for six male dancers was commissioned by New York City Center for the 10th anniversary of the Fall for Dance Festival.

The intoxicating rhythms of the conga, rumba, mambo, and cha cha are brought to life by choreographer Pedro Ruiz, a native of Cuba, in this re-imagined nightclub populated by virtuoso dancers.

Additional programs at the Apollo Theater will include special Ballet Hispanico Performances for Young People / Apollo School Day Live shows of mixed repertory for schoolchildren on the morning of November 20, 2015. Ballet Hispanico’s Performances for Young People (PYP) are interactive 50-minute productions that delight students with a guided exploration of Latin American dance forms and music. Apollo School Day Live provides new generations of theater-goers with exciting opportunities to learn about the arts, history and culture.