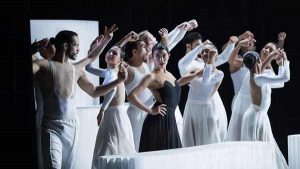 Ballet Hispánico, America’s leading Latino dance organization known for “piercing stereotypes” (The New York Times), kicks off its 50th Anniversary celebration by bringing its Latinx brand of contemporary dance to The Joyce Theater from April 7-19, 2020. Tickets start at $10 and are available for purchase in person at The Joyce Theater Box Office by calling JoyceCharge at 212-242-0800 or online at http://www.joyce.org/performances/ballet-hispanico.

To celebrate the Company’s 50th Anniversary, Ballet Hispánico’s Artistic Director & CEO, Eduardo Vilaro has curated a two week run at The Joyce Theater that celebrates and honors generations of Latinx artists. Gustavo Ramírez Sansano’s 18+1 makes its New York premiere alongside the award-winning work Jardi Tancat from Nacho Duato. Excerpts of significant works in Ballet Hispánico’s history, including Vicente Nebrada’s Batucada Fantástica and Graciela Daniele’s Cada Noche…Tango return to The Joyce stage after nearly thirty years. As a gift to founder Tina Ramirez, the program will feature a duet from William Forsythe’s, New Sleep, a first-time collaboration between Ballet Hispánico and this world-renowned choreographer. Annabelle Lopez Ochoa’s Tiburones and Sombrerísimo, featuring an all-female cast, with returning repertory from Andrea Miller, Pedro Ruiz, Eduardo Vilaro, and Ramón Oller, round out the program.

The New York premiere of 18+1 (2012) celebrates Gustavo Ramírez Sansano’s 19 years as a choreographer and the vulnerability, care, and hope that comes with each artistic endeavor. In a display of subtle humor and electric choreography, the movement merges with the playful rhythms found in Pérez Prado’s mambo music. Sansano draws from his history and memory to take a joyous look at the past, present, and coming future.

Nacho Duato’s very first work, Jardi Tancat (1983), based on Catalonian folk tales sung by Maria del Mar Bonet, won him first prize at the International Choreographic Workshop in Cologne. With equal shades of passion and melancholy, the ballet evokes the despairing yet hopeful prayers of Spaniards who wait for rain on their barren land.

William Forsythe’s duet from New Sleep (1987) is a neoclassical work scored by composer Thom Willems. This master work from Forsythe demonstrates his ability to deconstruct classical vocabulary maintaining a strict precision without confining the physical expression within the movement.

In Tiburones (2019), Annabelle Lopez Ochoa addresses the discrimination and stereotypes placed upon Latinx culture and the power the media has in portraying these themes by diminishing the voices of Latinx artists. Ochoa deconstructs gender roles and identity to revitalize an authentic perspective of Puerto Rican icons appropriated within the entertainment industry.

In Nací (2009), choreographer Andrea Miller draws from the multiplicity of her Spanish and Jewish-American background and employs her distinctive movement language to search for a new sense of home in this remembrance of lost and found homelands.

Ramón Oller grapples with ideas of betrayal, lost love, and oppression in Good Night Paradise (1994). This work brought to life a dark and powerful world of human struggle, complex relationships, and loss. Now, nearly 25 years later, Ramón has re-envisioned the work and expanded the world it portrays to include elements of his own life experiences.

Annabelle Lopez Ochoa’s Sombrerísimo (2013) references the iconic sombreros (hats) found throughout the world that help to represent culture. Originally choreographed for an all-male cast, Sombrerísimo will be performed by an all-female cast.

In an excerpt from Cada Noche…Tango (1988), Graciela Daniele takes a look at the underground nightlife of Buenos Aires in the 1920s and 30s and the intricate and smoldering partnering of Argentina’s beloved tango.

Vicente Nebrada’s Batucada Fantástica excerpts (1983) include two technically demanding solos that celebrate the neoclassical brilliance of the choreographer and the music of Rio de Janeiro’s Carnival.

Pedro Ruiz’s Club Havana (2000) showcases the intoxicating rhythms of the conga, rumba, mambo, and cha cha and relives the exciting era of fifties in Cuba.

An excerpt from Asuka by Eduardo Vilaro (2012) celebrates the life of legendary Queen of Salsa, Celia Cruz who captured the hearts of Latinos over the world and became a symbol of perseverance for many.

“Our 50th Anniversary programming represents the trajectory of the Latinx influence in dance. It is a celebration of Latinx artists who broke glass ceilings and those who continue the legacy of sharing and impacting our community with our artistic voices.” – Eduardo Vilaro, Artistic Director & CEO.

About Ballet Hispánico
Ballet Hispánico, America’s leading Latino dance organization, has been bringing people together to celebrate the joy and diversity of Latino cultures for 50 years.

Over the past five decades, Ballet Hispánico’s mission-driven ethos has been a catalyst of change for communities throughout our nation. By bringing the richness of the Latinx culture to the forefront of performance, education and social advocacy, Ballet Hispánico is a cultural ambassador.

The organization’s founder, National Medal of Arts recipient Tina Ramirez, sought to give voice to the Hispanic experience and break through stereotypes. Today, Ballet Hispánico is led by Eduardo Vilaro, an acclaimed choreographer and former member of the Company whose artistic vision responds to the need for social equity, cultural identity, and quality arts education for all.

Ballet Hispánico has been, and will continue to be, a beacon for diversity. The art we create explores and celebrates the culture without the trappings of stereotypes. We foster the pursuit of art as a way of providing transformation through the exploration of the human condition. Our art often defies gravity, acting as a frontline against cultural division by releasing preconceived notions of culture and instead offering our audiences new perspectives.
Eduardo Vilaro (Artistic Director & CEO) joined Ballet Hispánico as Artistic Director in August 2009, becoming only the second person to head the Company since it was founded in 1970. In 2015, Mr. Vilaro took on the additional role of Chief Executive Officer of Ballet Hispánico. He has been part of the Ballet Hispánico family since 1985 as a dancer and educator, after which he began a ten-year record of achievement as founder and Artistic Director of Luna Negra Dance Theater in Chicago. Mr. Vilaro has infused Ballet Hispánico’s legacy with a bold and eclectic brand of contemporary dance that reflects America’s changing cultural landscape. Born in Cuba and raised in New York from the age of six, he is a frequent speaker on the merits of cultural diversity and dance education.

Mr. Vilaro’s own choreography is devoted to capturing the spiritual, sensual, and historical essence of Latino cultures. He created over 20 ballets for Luna Negra and has received commissions from the Ravinia Festival, the Chicago Sinfonietta, the Grant Park Festival, the Lexington Ballet, and the Chicago Symphony. In 2001, he was a recipient of a Ruth Page Award for choreography, and in 2003, he was honored for his choreographic work at Panama’s II International Festival of Ballet. Mr. Vilaro was inducted into the Bronx Walk of Fame in 2016 and was awarded HOMBRE Magazine’s 2017 Arts & Culture Trailblazer of the Year. In 2019, Mr. Vilaro was the recipient of the West Side Spirit’s WESTY Award, was honored by WNET for his contributions to the arts, and most recently, was the recipient of the James W. Dodge Foreign Language Advocate Award.

About The Joyce Theater
The Joyce Theater Foundation (“The Joyce,” Executive Director, Linda Shelton), a non-profit organization, has proudly served the dance community for over three decades. Under the direction of founders Cora Cahan and Eliot Feld, Ballet Tech Foundation acquired and The Joyce renovated the Elgin Theater in Chelsea. Opening as The Joyce Theater in 1982, it was named in honor of Joyce Mertz, beloved daughter of LuEsther T. Mertz. It was LuEsther’s clear, undaunted vision and abundant generosity that made it imaginable and ultimately possible to build the theater. Ownership was secured by The Joyce in 2015. The theater is one of the only theaters built by dancers for dance and has provided an intimate and elegant home for over 400 U.S.-based and international companies. The Joyce has also expanded its reach beyond its Chelsea home through off-site presentations at venues ranging in scope from Lincoln Center’s David H. Koch Theater, to Brooklyn’s Invisible Dog Art Center, and to outdoor programming in spaces such as Hudson River Park. To further support the creation of new work, The Joyce maintains longstanding commissioning and residency programs. Local students and teachers (K- 12th grade) benefit from its school program, and family and adult audiences get closer to dance with access to artists. The Joyce’s annual season of about 48 weeks of dance now includes over 340 performances for audiences in excess of 150,000.