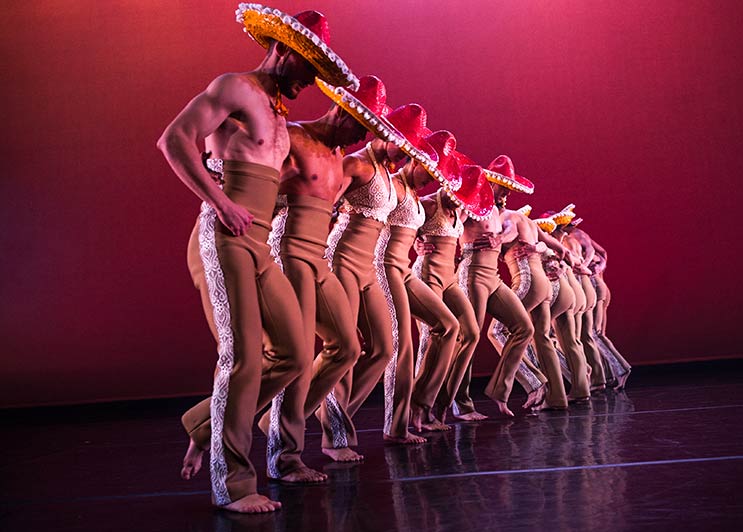 BALLET HISPÁNICO
in collaboration with
THE APOLLO THEATER
presents

The World Premiere of

Ballet Hispánico, the nation’s premier Latino dance organization, returns to the Apollo stage on Friday and Saturday, November 22 and 23, 2019 at 8:00pm with a program that continues its commitment to staging works by female, Latinx choreographers. Ballet Hispánico is sponsored by GOYA, which has sponsored the company since 1977.

In the World Premiere of Tiburones, Anabelle Lopez Ochoa reimagines the world of the street gang, The Sharks (from the award-winning musical West Side Story) from a Latinx and gender fluid perspective. Ochoa will embrace non-gender specific roles while deconstructing stereotypes and giving new life to an ever appropriated cultural icon.

In this restaging of Nací (2009), choreographer Andrea Miller draws from the duality of her Spanish and Jewish-American background and employs her distinctive movement style to investigate the Sephardic culture of Spain, with its Moorish influence and profound sense of community, despite hardship.

Con Brazos Abiertos (2017) is a fun and frank look at life caught between two cultures. Michelle Manzanales utilizes iconic Mexican symbols that she was reluctant to embrace as a Mexican-American child growing up in Texas, to speak to the immigrant experience. Intertwining folkloric representations with humor and music that ranges from Julio Iglesias to Rock en Español, the work brings life to a Latino dilemma.

“We are thrilled to bring the World Premiere of Annabelle Lopez Ochoa’s Tiburones to the Apollo Theater. Ballet Hispánico is dedicated to providing arts programming that is accessible to community members of all ages, abilities, and backgrounds and we are grateful for this continued partnership with the Apollo, allowing us another opportunity to elevate the voices of Latinx and female artists,”said Artistic Director & CEO Eduardo Vilaro.

“Our collaboration with Ballet Hispánico not only speaks to the importance of presenting such vital works in Harlem, but also speaks to the Apollo’s mission of continuing to create a 21st century performing arts canon. We want to not only commission and present a myriad of new multidisciplinary works, but also continue being a home for cultural innovators such as Ballet Hispánico,” said Kamilah Forbes, the Apollo’s Executive Producer.

“We are proud to support the work and talent of Ballet Hispánico because we value organizations who bring together communities of all cultures and ages through the beauty and passion of their art form,” said Rafael Toro, Director of Public Relations of GOYA Foods.

Tickets begin at $10 and will be available for purchase starting August 22, 2019. For more information, visit ballethispanico.org.

Univision Communications, Inc. is the Media Sponsor of Ballet Hispánico.

This performance at the Apollo is sponsored by GOYA.

Andrea Miller is Artistic Director and choreographer of Brooklyn-based company, Gallim, and has established herself as a perpetually groundbreaking artist. A sought-after creator and collaborator in dance, art, film, theater, tech, and fashion, Miller was named 2017/2018 Artist in Residence at The Metropolitan Museum of Art, and in October 2018, she was featured in Forbes as a female entrepreneur and leader in the dance world. Her highly acclaimed works are performed by Gallim as well as other leading dance companies around the world. Her work has been shown at The Metropolitan Museum of Art, Frieze Festival, Art Basel, Lincoln Center, The Kennedy Center, BAM Next Wave, The Joyce, and Jacob’s Pillow, among others. Miller’s educational programming is run from Gallim’s Brooklyn home studio and has been brought to universities and educational centers across the US.

Michelle Manzanales is a choreographer and dance educator originally from Houston, TX. Michelle is the Director of the Ballet Hispánico School of Dance, but lends her artistic voice to all facets of the organization. She began working with Eduardo Vilaro, in 2003 as a dancer for his company Luna Negra Dance Theater of Chicago where she also served as Rehearsal Director in 2006 and as Interim Artistic Director from 2009-2010. Ms. Manzanales has created works for professional dance companies, universities, and schools across the nation including a commission for Ballet Hispánico’s main Company for their 2017 season at The Joyce Theater. Her 2010 homage to Frida Kahlo, Paloma Querida, and 2007 piece, Sugar in the Raw (Azucar Cruda) have been praised by the Chicago Tribune and Chicago Sun Times. “This dance isn’t just about one girl’s experience; it applies to everyone, of any gender, and of any culture,” said CriticalDance of Manzanales’ Con Brazos Abiertos (2017).

Ballet Hispánico, America’s leading Latino dance organization, has been bringing individuals and communities together to celebrate and explore Latino cultures through dance for nearly 50 years. Whether dancing on stage, in school, or in the street, Ballet Hispánico creates a space where few institutions are breaking ground.

The organization’s founder, National Medal of Arts recipient Tina Ramirez, sought to give voice to the Hispanic experience and break through stereotypes. Today, Ballet Hispánico is led by Eduardo Vilaro, an acclaimed choreographer and former member of the Company whose vision of social equity, cultural identity, and quality arts education for all drives its programs.

Ballet Hispánico, a role model in and for the Latino community, is inspiring creativity and social awareness in our neighborhoods and across the country by providing access to arts education.

Eduardo Vilaro (Artistic Director & CEO) joined Ballet Hispánico as Artistic Director in August 2009, becoming only the second person to head the company since it was founded in 1970. In 2015, Mr. Vilaro took on the additional role of Chief Executive Officer of Ballet Hispánico. He has been part of the Ballet Hispánico family since 1985 as a dancer and educator, after which he began a ten-year record of achievement as founder and Artistic Director of Luna Negra Dance Theater in Chicago. Mr. Vilaro has infused Ballet Hispánico’s legacy with a bold and eclectic brand of contemporary dance that reflects America’s changing cultural landscape. Born in Cuba and raised in New York from the age of six, he is a frequent speaker on the merits of cultural diversity and dance education. Mr. Vilaro’s own choreography is devoted to capturing the spiritual, sensual, and historical essence of Latino cultures. He created over 20 ballets for Luna Negra and has received commissions from the Ravinia Festival, the Chicago Sinfonietta, the Grant Park Festival, the Lexington Ballet, and the Chicago Symphony. In 2001, he was a recipient of a Ruth Page Award for choreography, and in 2003, he was honored for his choreographic work at Panama’s II International Festival of Ballet. Mr. Vilaro was inducted into the Bronx Walk of Fame in 2016 and was awarded HOMBRE Magazine’s 2017 Arts & Culture Trailblazer of the Year. In 2019, Mr. Vilaro was the recipient of the West Side Spirit’s WESTY Award, was honored by WNET for his contributions to the arts, and most recently, was the recipient of the James W. Dodge Foreign Language Advocate Award.

About the Apollo Theater

The legendary Apollo Theater-the soul of American culture-plays a vital role in cultivating emerging artists and launching legends. Since its founding, the Apollo has served as a center of innovation and a creative catalyst for Harlem, the city of New York, and the world.

With music at its core, the Apollo’s programming extends to dance, theater, spoken word, and more. This includes special programs such as the blockbuster concert Bruno Mars Live at the Apollo, 100: The Apollo Celebrates Ella, the annual Africa Now! Festival, the New York premiere of the opera We Shall Not Be Moved, and the world premiere of Between the World and Me. The Apollo is a performing arts presenting organization that also produces festivals and large-scale dance and music works organized around a set of core initiatives that celebrate and extend the Apollo’s legacy through a contemporary lens; global festivals including the Women of the World (WOW) Festival and Breakin’ Convention, international and U.S.-based artist presentations focused on a specific theme; and special projects, multidisciplinary collaborations with partner organizations.

Since introducing the first Amateur Night contests in 1934, the Apollo Theater has served as a testing ground for new artists working across a variety of art forms and has ushered in the emergence of many new musical genres-including jazz, swing, bebop, R&B, gospel, blues, soul, and hip-hop. Among the countless legendary performers who launched their careers at the Apollo are D’Angelo, Lauryn Hill, H.E.R., Machine Gun Kelly, Miri Ben Ari, Ella Fitzgerald, Sarah Vaughan, Billie Holiday, James Brown, Gladys Knight, Luther Vandross, and Stevie Wonder; and the Apollo’s forward-looking artistic vision continues to build on this legacy.

Founded in 1936, Goya Foods, Inc. is America’s largest Hispanic-owned food company, and has established itself as the leader in Latin American food and condiments. Goya manufactures, packages, and distributes over 2,500 high-quality food products from Spain, the Caribbean, Mexico, Central and South America. Goya products have their roots in the culinary traditions of Hispanic communities around the world. The combination of authentic ingredients, robust seasonings and convenient preparation makes Goya products ideal for every taste and every table. For more information on Goya Foods, please visit www.goya.com.