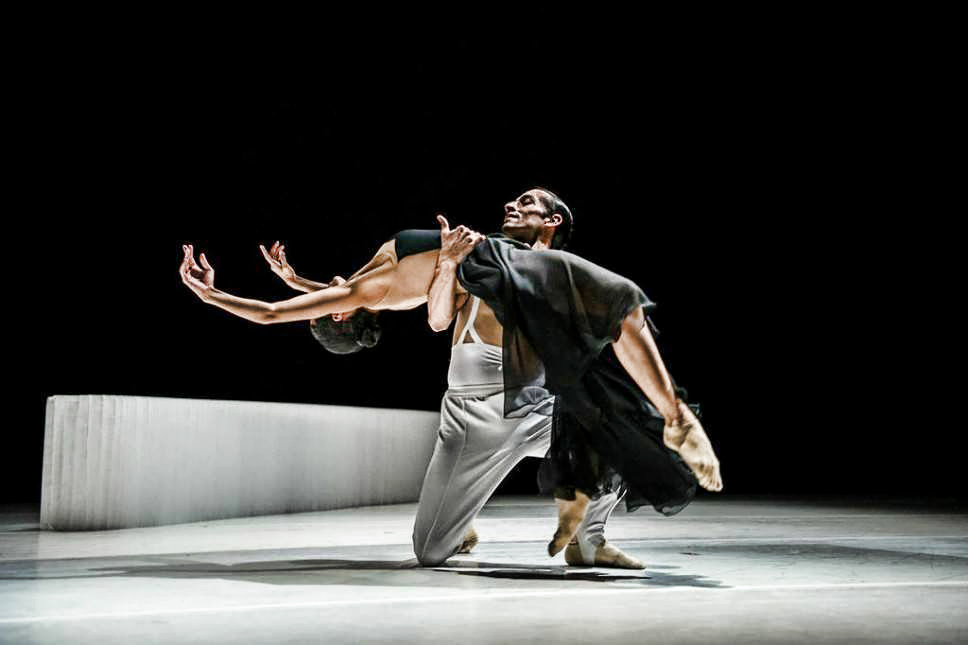 Bury Me Standing by Ramón Oller

Fun and Interactive En Familia Matinee for Families on Saturday, 4/9

New York, NY – Ballet Hispanico, the nation’s premier Latino dance organization, celebrates its 45th anniversary New York Season at the Joyce Theater from April 5-10, 2016 with eight performances featuring a New York Premiere and a special matinee for children and families. Tickets start at $10 and are on sale now at www.joyce.org.

Artistic Director and CEO Eduardo Vilaro debuts a program that promises to be as transcendent as the company’s “extremely capable and charismatic dancers” (The New York Times), featuring Ballet Hispanico’s effervescent signature work Club Havana by Cuban-American choreographer Pedro Ruiz along with a double bill of Spanish favorites: the New York Premiere of Gustavo Ramírez Sansano’s colorful, amusing and fast-moving Flabbergast, as well as a revival of Ramón Oller’s beloved and haunting Bury Me Standing.

“Our Joyce program this year showcases the breadth and range of the company over the past 45 years of artistic reflection,” said Eduardo Vilaro, Artistic Director and CEO of Ballet Hispanico. “Pedro Ruiz and Ramón Oller both have a meaningful history with Ballet Hispanico, and Gustavo Ramírez Sansano has quickly established himself as a standout choreographic voice since we introduced his work to New York audiences two years ago. Their works honor Ballet Hispanico’s trajectory while embracing our forward-thinking spirit.”

In keeping with its mission to make the beauty of the arts and Latino culture accessible to all communities, Ballet Hispanico for the second year brings its En Familia matinee to the Joyce Theater: a 90-minute, fun-filled journey through Latin American dance and culture featuring Artistic Director Eduardo Vilaro and Education Director AnaMaria Correa as co-hosts, excerpts from Ballet Hispanico’s diverse repertory and a Q&A with the dancers. Tickets for the En Familia matinee are $10-25.

Celebrating 45 years of sharing and reflecting the ever-changing diversity of Latino cultures, Ballet Hispanico is the new expression of American contemporary dance. Founded by Tina Ramirez, recipient of the National Medal of Arts, and now led by Artistic Director Eduardo Vilaro, the Company has produced world-class, multifaceted performances that have featured master works by Nacho Duato, cutting-edge premieres by Cayetano Soto and Annabelle Lopez Ochoa, and live music collaborations with renowned artists such as Paquito D’Rivera and Ruben Blades-to name a notable few. Ballet Hispanico has performed for audiences totaling over 3 million, throughout 11 countries, and on 3 continents. Through the work of its professional company, school of dance, and community arts education programs, Ballet Hispanico celebrates the dynamic aesthetics of the Hispanic diaspora, building new avenues of cultural dialogue and sharing the joy of dance with all communities. For more information, visit www.ballethispanico.org. Follow Ballet Hispanico on Facebook,Instagram and Twitter.

EDUARDO VILARO joined Ballet Hispanico as Artistic Director in August 2009, becoming only the second person to head the company since it was founded in 1970. He has been part of the Ballet Hispanico family since 1985 as a principle dancer and educator, after which he began a ten-year record of achievement as Founder and Artistic Director of Luna Negra Dance Theater in Chicago. Mr. Vilaro has infused Ballet Hispanico’s legacy with a bold and eclectic brand of contemporary dance that reflects America’s changing cultural landscape. Born in Cuba and raised in New York from the age of six, he is a frequent speaker on the merits of cultural diversity and dance education.

THE JOYCE THEATER FOUNDATION, INC., a non-profit organization, has proudly served the dance community and its audiences since 1982. The founders, Cora Cahan and Eliot Feld, acquired and renovated the Elgin Theater in Chelsea, which opened as The Joyce Theater in 1982. The Joyce is named in honor of Joyce Mertz, beloved daughter of LuEsther T. Mertz. It was LuEsther’s clear, undaunted vision and abundant generosity that made it imaginable and ultimately possible to establish the theater. One of the only theaters built by dancers for dance, The Joyce Theater has provided an intimate and elegant New York home for more than 290 domestic and international companies. The Joyce has also commissioned more than 130 new dances since 1992. In 1996, The Joyce created Joyce SoHo, a dance center providing highly subsidized rehearsal and performance space to hundreds of dance artists. New York City public school students and teachers annually benefit from The Joyce’s Dance Education Program, and adult audiences get closer to dance through pre-engagement Dance Talks and post-performance Humanities discussions. The Joyce Theater now features an annual season of approximately 48 weeks with over 340 performances for audiences in excess of 135,000.