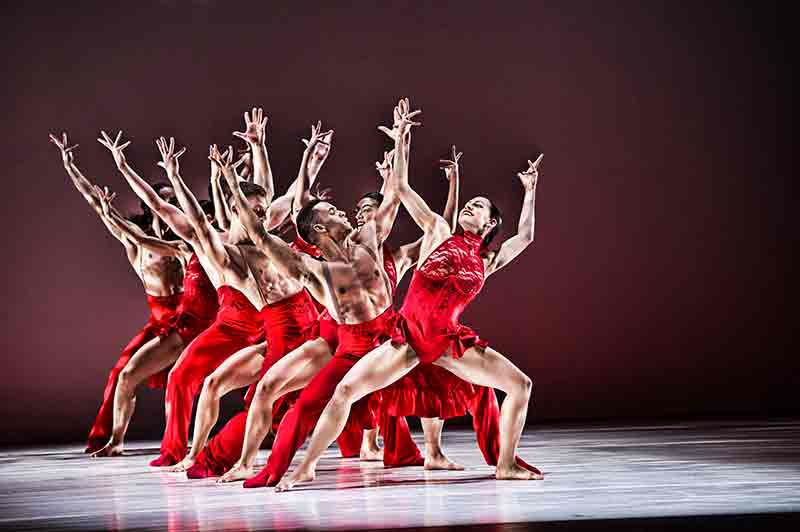 Ballet Hispánico, the nation’s premier Latino dance organization, brings its bold and eclectic brand of contemporary dance to the Joyce Theater with a program of all-female choreographers from April 18-23, 2017. Tickets start at $10 and are on sale now at Joyce.org

The engagement features the world premiere of Michelle Manzanales’s Con Brazos Abiertos, an exploration of iconic Mexican symbols that Manzanales was reluctant to embrace as a Mexican-American child growing up in Texas;Línea Recta by Belgian-Colombian Annabelle Lopez Ochoa, a work pairing the hallmark passion of flamenco dance with highly inventive and intricate partnering; and 3. Catorce Dieciséis by Tania Pérez-Salas, one of the leading voices of Mexican contemporary dance, which draws inspiration from the number Pi to reflect on the circularity of the human condition.

In her first work for Ballet Hispánico, Michelle Manzanales explores with humility, nostalgia and humor the iconic Mexican symbols that she was reluctant to embrace as a Mexican-American child growing up in Texas. Intertwining folkloric details with a distinctly contemporary voice in dance, set to music that ranges from Julio Iglesias to rock en español, Con Brazos Abiertos is a fun and frank look at a life caught between two cultures. Con Brazos Abiertos came to fruition through Ballet Hispánico’s Instituto Coreográfico, an innovative choreography lab for Latino dance makers launched in 2010 by Artistic Director & CEO Eduardo Vilaro.

From one of today’s most sought-after choreographers comes a powerful and resonant work that explores an intriguing aspect of flamenco dance: the conspicuous absence of physical contact between dancers. While maintaining the integrity and hallmark passion of the genre, Belgo-Colombian Annabelle Lopez Ochoa imagines an original and explosive movement language premised upon the theme of communication between the sexes and performed to an original guitar composition by Eric Vaarzon Morel. Línea Recta came to fruition through Ballet Hispánico’s Instituto Coreográfico, an innovative choreography lab for Latino dance makers launched in 2010 by Artistic Director & CEO Eduardo Vilaro. Línea Recta was commissioned in part by the Apollo Theater and Jacob’s Pillow Dance Festival.

One of the leading voices of Mexican contemporary dance, Tania Pérez-Salas draws inspiration from the number Pi to reflect on the circularity of the human condition. With intense theatricality and breathtaking imagery set to music by Vivaldi and other Baroque composers, 3. Catorce Dieciséis is a joyful feast for the senses.