At Charlotte’s Place in Lower Manhattan

Sara Miles on CITY OF GOD: Faith in the Streets 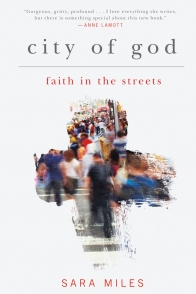 Acclaimed author Sara Miles reads from her new book, City of God: Faith in the Streets, a powerful account of venturing beyond the borders of religion into the unpredictable territory of faith on Ash Wednesday 2012 in San Francisco’s Mission District.

In CITY OF GOD: Faith in the Streets, Sara Miles recounts in vivid detail the sacred ritual of taking ashes out to the streets of San Francisco’s Mission district on Ash Wednesday 2012, exploring the profound implications of touching strangers with a reminder of common mortality. As the story unfolds, Sara Miles also reflects on life in her city over the last two decades, where the people of God suffer and rejoice, building community amid the grit and beauty of the streets.

Miles is the founder and director of The Food Pantry, and serves as Director of Ministry at St. Gregory of Nyssa Episcopal Church in San Francisco. Her recent books include Take This Bread: A Radical Conversion and Jesus Freak: Feeding Healing Raising the Dead. Learn more at saramiles.net. This is her only New York City appearance.

Charlotte’s Place is a free space in Lower Manhattan.  Open to everyone, it is supported and operated by Trinity Wall Street, an Episcopal parish in the city of New York.