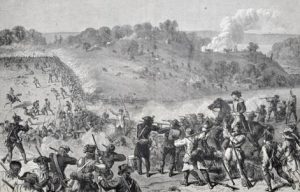 At the Morris Jumel Mansion

The Story of America Symposium

This 4 part symposium will feature scholars discussing the important role New York played in shaping the story of America. Lunch will be served.

The event is $40 per person, advanced registration is required.

Part 1: The New Nation: The American Revolution and the First Capital

Part 3: Reconstruction and Reform: From President Grant to T. Roosevelt and Al Smith

Part 4: Artistic New York: How writers and painters have influenced the nation