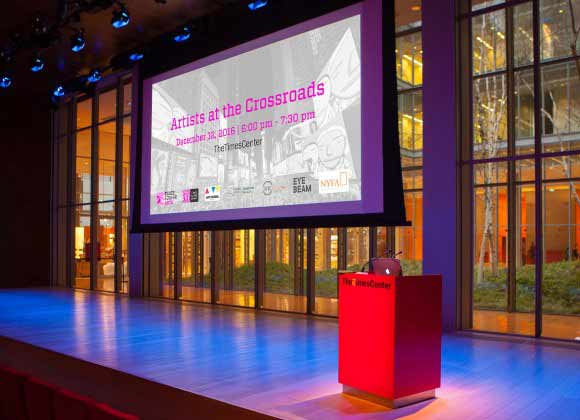 Artists at the Crossroads

Join us for the second ‘Artists at the Crossroads’ talk to hear the winter and spring residents present their residencies and join in conversation with fellow resident artists R. Luke DuBois and Okwui Okpokwasili, and future resident artists Mendi + Keith Obadike, moderated by Adam Sternbergh, Cultural Editor at New York Magazine.

During the Winter 2015-2016 residency, visualist/software designer Joshue Ott and composerKenneth Kirschner collaborated to research and develop mobile technologies for visual and sound art with the ultimate goal of creating a free, publicly available smartphone app. Through public engagement, research and digital collection, they created soundscapes and a new iteration of theirvariant app series, variant:breaker.

In Spring 2016, Joseph Keckler set out to challenge New Yorkers’ supposed rejection of Times Square and their claims to “never go there,” by lurking around and looking for locals he recognized to ask questions. As the approach became passive observation, his practice shifted indoors. From a small, ubiquitous office on 46th Street, he created a rehearsal studio, writing room and even film set.

For Spring 2017, musician/artist/writers Mendi + Keith Obadike will interweave Times Square’s geography with a vocal interpretation of its unique soundscape to create an interactive navigational tool that allows visitors to compose their own harmonies while walking around the neighborhood.

Residency at the Crossroads is a cross-disciplinary and collaborative residency program, in which artists are invited to experiment and engage with Times Square’s unique urban identity and users. Launched in Summer 2015, the program hosted a series of four three-five month residencies for New York City-based artists, infusing artists into the thriving urban commercial district of Times Square in order to creatively investigate its identity and usage through observation, experimentation, engagement and documentation. The results are often different than the original intent, thus strengthening the argument for process-driven programs such as this. Join us to hear and see a bit of what happened.