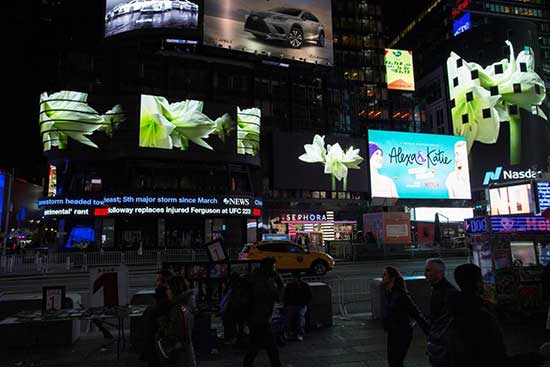 Spring has Sprung in Times Square

Shot in stunning 4K Ultra High Definition with a moving time-lapse camera, Spring is a romantic, evocative portrayal of New York’s flowers in active bloom and the accelerated rush of the city itself.

Midnight Moment is the world’s largest, longest-running digital art exhibition, synchronized on electronic billboards throughout Times Square nightly from 11:57 pm to midnight. Presented by the Times Square Advertising Coalition and curated by Times Square Arts since 2012, it has an estimated annual viewership of 2.5 million.

Jamie Scott (b. 1977, lives and works in New York, NY) studied Media Production at Bournemouth University and Majored in 3D animation. He started his career in 1999 at the London post production facility The Mill where he became a lead Flame artist working on commercials, music videos and short films. In 2003 transferred to the New York office. He has since worked at Mass Market and Psyop in New York and Method Studios in LA. He now works as a freelance senior Flame artist and visual effects supervisor in New York. He has worked on several award-winning campaigns including Miller Domino (Clio), Nextel Build (Clio), Stereogram Walkie Talkie Man (MTV VMA), Nike Human Chain (Clio, Cannes Lion) and Audi Synchronised (Clio).

Vimeo’s flagship Staff Pick channel launched in 2008 to celebrate the best of the best films uploaded directly from its community of world class filmmakers. The channel currently features over 10,000 films hand-picked by Vimeo’s in-house curation team for global audiences to discover and enjoy. Our community of filmmakers are the next generation of storytellers and Staff Picks has become a source for agencies and production companies to hire new talent.

Vimeo empowers video creators of all kinds to tell exceptional stories and connect with their audiences and communities. Home to more than 70 million members in over 150 countries, Vimeo is the world’s largest ad-free open video platform and provides powerful tools to host, share and sell videos in the highest quality possible. Headquartered in New York City and with offices around the world, Vimeo is an operating business of IAC (NASDAQ: IAC). Learn more at www.vimeo.com.