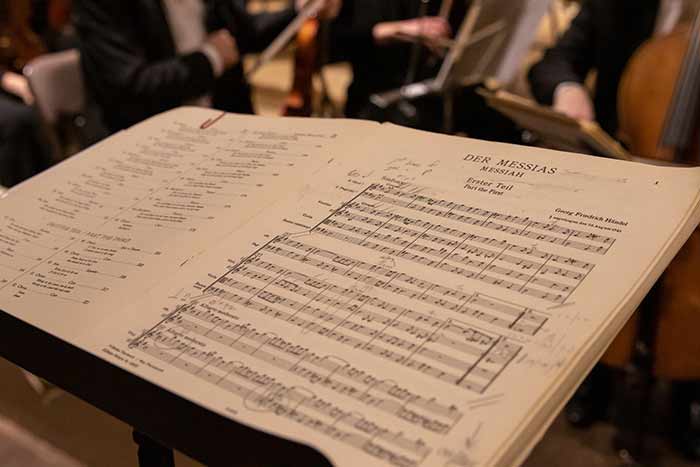 Annual Christmas Concert at our Lady Queen of Martyrs

SACRED MUSIC SOCIETY of Our Lady Queen of Martyrs

Tickets are $35 general admission and $10 for children 12 and under accompanied by an adult.

For additional information, please call Our Lady Queen of Martyrs Rectory at 718-268-6251.

In the second half of the program, “The Many Moods of Christmas, Suite 1,” a suite of carols of the season from the incomparable team of Robert Shaw and Robert Russell Bennett including “Adeste Fideles” and “Silent Night!” will be performed. The magic of tenor John Easterlin returns from a long engagement in Broadway’s “Phantom of the Opera” to bring us, once again, his thrilling “Ten Thousand Joys.” Take a ride in the snow this year and join in fun as we all clap along to Leroy Anderson’s “Sleigh Ride,” an enduring holiday favorite! Lift your voices in song with the entire chorus and orchestra in “Hark! the Herald Angels Sing.” “O Holy Night” rounds out our concert that is not to be missed.

We are thrilled to bring this magnificent music to our parishioners and friends of Our Lady Queen of Martyrs.The concert is a much anticipated event at the church as parishioners and friends begin their preparations for the Christmas season. It is an annual tradition that brings the whole community together as the entire audience celebrates with their favorite Christmas carols with the chorus and full orchestra!

The concert is performed in the church, located on Ascan Avenue and Queens Boulevard. Tickets are $35 general admission and $10 for children 12 and under accompanied by an adult. For additional information, please call Our Lady Queen of Martyrs Rectory at 718-268-6251.

DAVID CLOSE, conductor, is Director of Music and Organist of Our Lady Queen of Martyrs and its Sacred Music Society and organist of Temple Am Echad in Lynbrook, NY. Maestro Close is Artistic Director and Conductor of The Oratorio Society of Queens and The Orchestral Arts Ensemble of Queens. For many years, he served as conductor and vocal coach of the Queens College Opera Theater and conducted performances of the Singers’ Theater of Westchester, the Manhattan Opera and the New York Lyric Opera and Summer Sings for the New York Choral Society and the Masterwork Chorus of New Jersey. He created Musica Reginae Productions and was a founding member of the Flushing Council on Culture and the Arts. He has conducted in the annual Messiah Sing-in at New York’s Philharmonic Hall and he just recently conducted a New York Choral Society Summer Sing at Symphony Space. Maestro Close will appear in a Holiday Concert with the Oratorio Society of Queens on Sunday, December 22.

JENNIFER GLIERE, soprano, from Cincinnati Ohio, has been described as “a sensitive artist who knows how to turn a phrase while giving urgent meaning to the text.” She has appeared in recital and oratorio in Austria, France, Germany, Italy, Russia, Ukraine, and throughout the United States. She has given two recital tours in Mexico, performing in live festivals and events around the country as well as giving masterclasses to several youth choirs and appearing in television and radio studios. Her repertoire runs the gamut from Barbara Strozzi chamber music and cantatas, early Baroque zarzuelas, Handel’s Ode for St. Cecilia’s Day, Bach’s B Minor Mass/Magnificat, and Rossini’s Stabat Mater to Luigi Dallapiccola’s Canti di Prigionia and Poulenc’sGloria. This summer found her on a return recital tour in Russia with performances in Siberia, the Ural Mountains, and Moscow. Equally at home on the concert and operatic stages, Gliere has garnered rave reviews for her portrayals of many heroines; Violetta in La traviata was called a “delicate powerhouse… displaying vocal effervescence as good as any champagne.” Other noted roles include Gilda in Rigoletto, Suzel in Mascagni’s L’amico Fritz and Michaëla in Carmen. She has been involved with productions at the Bard Opera Theatre and appeared with Amor Artis and New Opera New York.

JOHN EASTERIN, tenor, a five-time Grammy Award and two-time Emmy Award winner with three listings in the Guinness Book of World Records, has performed at America’s leading opera houses, including the Metropolitan Opera, Lyric Opera of Chicago, San Francisco Opera, Los Angeles, and Seattle Opera, as well as appearing at many of the leading opera houses in Europe, including the Wiener Staatsoper, Opéra National de Paris, Royal Opera House Covent Garden, Teatro Real, and English National Opera. A master puppeteer and certified magician, he became the first opera singer in history to win at the renowned Cannes Film Festival for his dual performance in Rise and Fall of the City of Mahagonny and a recipient of London’s prestigious Olivier Award for his Covent Garden debut in The Gambler. His career highlights include creating roles in two world premiere operas: Andy Warhol in Philip Glass’ The Perfect American and Larry King in Anthony Turnage’s Anna Nicole; and his Broadway debut as Ubaldo Piangi in The Phantom of the Opera, a role he portrayed for two years and over 850 performances. He wishes each of you a Christmas season filled with ‘ten thousand joys.’

SACRED MUSIC SOCIETY OF OUR LADY QUEEN OF MARTYRS was founded in 1983. It presented its first major Christmas Concert in 1984. Excerpts from G.F. Handel’s Messiahand beloved Christmas carols and holiday favorites were featured. The combined choruses of the Choir of Our Lady Queen of Martyrs and the Oratorio Society of Queens are joined by professional soloists and a full symphony orchestra to make this outstanding presentation, one without equal in the borough of Queens. The performance of the Annual Christmas Concert has become a tradition that continues to the present day under the direction of Music Director and Conductor, Maestro David Close.