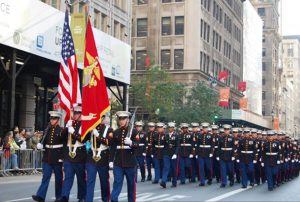 Launching Toys For Tots This Year,

Guests at the event will include Raymond W. Kelly, the Parade Grand Marshal and former Police Commissioner, and his wife, Veronica Kelly, a veteran of the U.S. Coast Guard Reserve.  Readings by Christian, Muslim and Jewish chaplains will open the Memorial Ceremony.

Following the Memorial Ceremony, “America’s Parade” — the largest celebration of service in the nation — steps off at 11:11 a.m. at 26th Street and Fifth Avenue and proceeds up Fifth Avenue to 53rd Street.  This year, the Parade is the official kick-off for Toys for Tots and spectators are urged to bring toys which will be collected along the Fifth Avenue parade route.

The parade features 27,000 participants, including veterans, active military units and high school bands from around the nation.  For more information and images, visit americasparade.org.