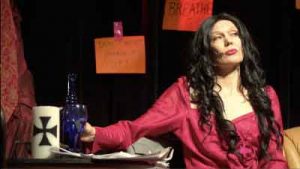 Theater for the New City

Assuming the character of the exotic dancer and WWI spy, actress Eva Dorrepaal explores Mata Hari’s entanglements with men, discovering that she and her subject share an addiction to dangerous love.

NEW YORK — In creating a theater piece about Mata Hari, the Dutch-born actress Eva Dorrepaal (www.evadorrepaal.com) found that she shared one quality with the infamous World War I-era spy:  an addiction to dangerous love.  The truth is, you could probably find more similarities if you dig farther, but this is the idea behind her solo show, “Almost Mata Hari – Lovers, Letters and Killers,” whose premiere run will be presented by Theater for the New City January 7 to 24.

Mata Hari, née Margaretha Geertruida Zelle (1876-1917), was a sort of ultimate fallen woman.  The daughter of a bankrupted Dutch hat maker, she married a violent, abusive Dutch naval officer in 1895.  In 1902, she divorced her husband, moved to Paris, and reinvented herself as a celebrated exotic dancer and courtesan.  A master of four European languages, she collected many lovers, including top-tier military officers on both sides of World War I, whose generosity funded her lavish lifestyle. The Great War didn’t stop her from traveling between belligerent countries and when German intelligence heard she was going to France, they offered her 20,000 DM to gather information.  She took the money without the responsibility, reasoning that the Germans owed her much more than that for confiscating her furs and deposits when the war broke out. She threw their invisible ink in the North Sea Canal, forgot the incident and continued her nonchalant lifestyle.  In Paris she fell deeply, passionately in love with Vadime de Masloff, a 21-year-old Russian captain fighting with the French army.  He was subsequently wounded by poison gas and sent to recuperate in the restricted French town of Vittel.  Desperate for a visa to visit him, and for money to marry and keep him after the war, Mata Hari agreed to spy for France. She spent three afternoons seducing a German major Von Kalle in Madrid who fed her inaccurate information and to whom she passed along only gossip items from newspapers.  It was an amateurish escapade and she had already been flagged by British intelligence as a possible double-agent.  The game ended when the Germans “burned” her for her disloyalty by supplying evidence against her in communications they knew would be intercepted by the French.  Following the disaster at Verdun, it served the French war machine to expose a high-profile person as a spy.  She was arrested, tried, convicted of being an enemy agent, and executed by firing squad in France.  In the course of her trial, many potential defenders, including her beloved Masloff, shunned her.  The prosecution actually proved merely that Mata Hari was a free-lance agent who had committed espionage only once–for the French.  The bottom line is, she died for being a notorious adventuress, a free woman in a men’s world and a sort of fool for love.

In this play, actress Eva Dorrepaal investigates the process of preparing a play on Mata Hari, which forces her to examine a dangerous love affair in her own past with a man named Drazen Zabek: a handsome, irresistible mystic who worked as a street performer in Ghent.  An outcast from Serbia and Croatia, he had settled in Holland and specialized in three things:  performing as a green statue in public places, “liberating” himself and the women who loved him, and having sex to open the chakra of creativity.  He taught her the craft of a street performer, became both her lover and healer, and tortured her with jealousy when he reunited with his former girlfriend. Had Dorrepaal not moved to the USA upon winning a Green Card lottery, she would have, in all likelihood, been murdered by Zabek in a cult ritual that actually claimed the life of his subsequent girlfriend.  Zabek hung himself in his jail cell while awaiting trial, leaving Dorrepaal with unfinished feelings–including guilt–that continue to this day.  She testifies to regrets like “If I hadn’t left him, he would have been OK.”

Mata Hari’s fascination with bad boys in uniform seems to have been her downfall (both her husband, MacLeod, and her great love, Masloff, were officers). Eva Dorrepaal extends the idea of her romantic obsession to bad boys of all kinds.  This play is meant to be an examination of dangerous love.  Mata Hari declares, “I was the cause of all my husband’s abuse and I don’t deny it.”  Reflecting on her own dead ex-lover, Dorrepaal asks, “How could a killer have so much light?”  Her play, she says, targets women who struggle with dangerous romances and have crushes on bad boys.

The focus of the play is not biography but the creative process, as Dorrepaal plays an actress struggling to assume the role of Mata Hari.  In the rehearsal space of a messy basement apartment, alone with her props, costumes and notes, she improvises the character before a video camera, free-associates, engages in peculiar character exercises, and experiments with dressing the part.  Tall, sultry and slinky, she alternately dons and abandons fans, wigs and a belly dance costume that suggest Mata’s own exotic accoutrements.  Her character is named Ava, a play on Eva Dorrepaal’s real name to indicate her own reflection in the role.  The themes of the play are dark, but played with a comedic touch. Dorrepaal brings a self-effacing humor to the fickleness of her creative process, the tragedy of her subject and her erotic obsession for a godlike man who plays a living statue for a living and is manic about clearing his aura and everyone else’s.  Dark comedy also leaks through her physicality, as when, in a particularly tragic and sultry moment, she reaches across the set with a long, lithe, slender leg to grab a book with her toes.

Eva Dorrepaal (www.evadorrepaal.com) is best known for her leading roles in almost all the feature films of director Edwin Brienen, which were shot in Amsterdam and Berlin.  Brienen is known as the “Dutch Fassbinder” because of the high production level and style of his films.  Dorrepaal divides her time between Europe and New York, working in theater, film and television.  She has created three solo theater plays, one on Mata Hari, one on the process of creating Mata Hari, and a third one recalling the Serbo-Croatian War, when she traveled through Kosovo with a renowned experimental theater group of Ljubiša Ristic, KPGT.  Dorrepaal began her acting career under the tutelage of minimalist filmmaker Pim de la Parra and studied acting and directing in the Netherlands.  Her stage work also includes “The Tempest,” “Carmen,” “Protocol,” “A Midsummer Night’s Dream” and “Gospodjica.” In New York, she continues to make films with directors including Jonathan Caouette, Jorge Torres-Torres and others. She has done more than 30 films in different countries.  She appeared last season at Theater for the New City in the 2014 revival of “Kitchenette” by Ronald Tavel, part of “Two by Tavel” directed by Norman Glick.

“Almost Mata Hari” had three workshop performances at Coney Island USA in April under the title “Lovers, Letters and Killers.”  This TNC production will be its world premiere.  It has been co-directed by Kirsten Kinneging and Myrte Amons, both of The Netherlands.  Costume design is by Diana Gentleman, who is an expert in creating belly dance designs which include intricate accessories and attire.  Lighting design is by Francisco Cardozo.

Eva Dorrepaal says, “TNC is my dream place because of the vibe of the theater, its love for playwrights.  It is one of the last theaters that is experimental, community minded and really vibrant. They even adopted a cat.  It is the perfect place for this play and I am extremely grateful that TNC is giving me this chance.”