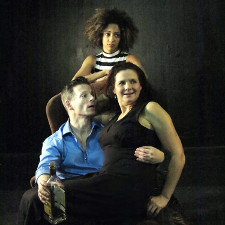 Comedy of bungled romance in Levittown, LI between two mid-lifers:
one who ran away and one who stayed.

The filmmaker, Michael Sullivan, recently 40, has a smarmy, sarcastic yet charming way about him as he struggles with the challenges of what he sees as a wasted life.  His pseudonym in the softcore porn business is Allen Wilder, a moniker he took from his idols, Woody and Gene.  His old babysittter, Donna Mullins, is ten years older.  A recently divorced, attractive mother of two, she is rediscovering her youth and making up for lost time after her failed marriage.  After drinking in a trashy bar, they have fallen upon each other in Michael’s parents’ shabby living room, only to find themselves in the embarrassing position of justifying themselves to Katla, the biracial daughter of Michael’s sister, who barges in on their tryst.

Among Michael’s shames is that he spent his life chasing an idealistic Hollywood dream he couldn’t achieve because his abilities were not equal to his aspirations.  So he buries his disappointment in the soft arms of his actresses.  His other major shame is the buried history of racism in his family, which he feels obligated to reveal to Kayla, who idealizes everyone in her mother’s family except her Uncle Michael.

While Michael’s pain comes from the failure of best intentions, Donna reflects a different kind of self-hatred.  She hates her town, the island, that she stayed there, that she didn’t notice that her ex was such an asshole, and that the only remotely interesting and attractive man she’s met since her divorce is the kid she used to babysit, whom she now sees as nothing more than a Skinemax-directing party animal.  Their relationship ought rightly to be dismissed with a shudder, yet they can end up at an understanding…sort of.  The moral of the play, says the playwright, is that the failure of best intentions chips away at people and screws them up.  Its redeeming idea is that friendship is able to surmount most obstacles.  But how easy is it to start over?

Originally a filmmaker, Matt Morillo made an auspicious theatrical debut in 2006 with “Angry Young Women In Low Rise Jeans With High Class Issues.”  The comedy was presented by TNC in 2007, an Off-Broadway run in NYC, multiple engagements in Hollywood and Sydney (Australia) and TNC return engagements in 2009, 2010 and 2011, but never seemed to exhaust its audience.  It was followed by a thoughtful comedy, “All Aboard the Marriage Hearse” (TNC, 2008), and Morillo’s first serious play, “American Soldiers” (TNC, January 2010), a family drama about a woman war veteran’s return to her home in Long Island.  In 2011, Morillo returned in comic form with “The Inventor, The Escort, The Photographer, Her Boyfriend and His Girlfriend,” a play partly inspired by Elliott Spitzer’s imbroglio with a paid escort. It subsequently went on to an acclaimed Los Angeles run and an award winning run at the 2013 Edinburgh Fringe Festival.  The first three plays have been published by Samuel French.

He writes, “TNC has afforded me the opportunity that is the dream of every artist.  To be able to hone my abilities in an environment where they support, promote, nurture and inspire you to push, grow, and stretch all of your abilities to levels that perhaps even you yourself do not think are possible. I can’t explain how happy I am to be back here…at home!”