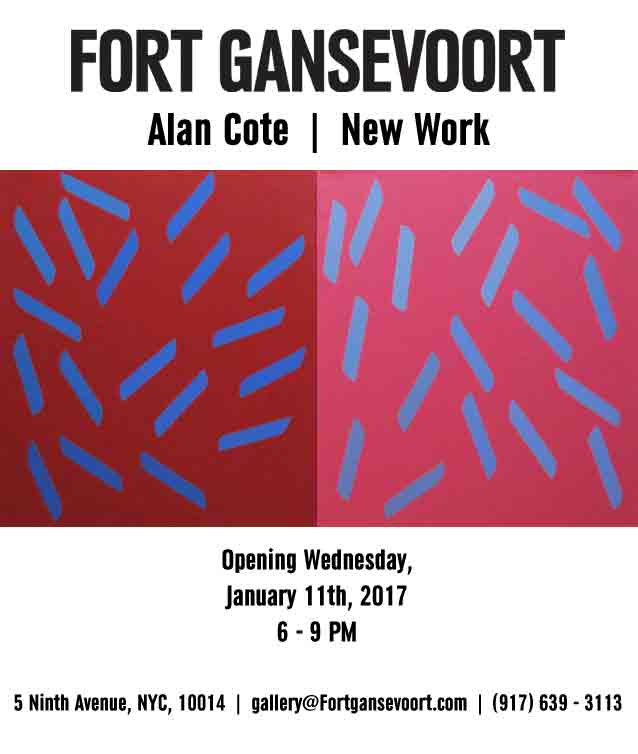 Fort Gansevoort is pleased to announce an exhibition of recent paintings, gouaches, and process drawings by Alan Cote, filling three floors of Fort Gansevoort’s exhibition space in the Meatpacking District, between January 11 – February 7, 2017.

Having spent the early part of his career living and working in Tribeca, in the 1980s Alan Cote relocated his practice to a former tugboat factory two hours upstate in the Hudson River Valley. Today his studio occupies a repurposed brick high school gymnasium where he continues to develop a personal vocabulary within formal abstraction.

New Work includes a selection of eight gouaches, two dimensional drawings, and six large-scale paintings. Cote’s formal investigation is anchored in the relationship established between the paired panels of each painting, which affect one another not only through harmony, opposition and color play, but also through the perceived directional motion of the “elements” that populate their surfaces. Likened by some writers to “geometric gestures,” Cote’s elements are energetic forms that oscillate between line and shape, a key component in the visual language of Cote’s work.

His process of making a painting begins with sketchbook notations and graduates toward a more finished form of dimensional drawings on graph paper, where the element positions are set. Those compositions are then transferred onto watercolor paper to form the basis of his gouache color studies. In the last leg of his process, Cote creates large scale paintings where the color relationships and tonality of his elements are some of the final things to change.

Alan Cote was born in in Windham Conneticut in 1937. He earned an MA in the School of the Museum of Fine Arts, Boston, in 1960 and received a Fellowship from the Museum of Fine Arts, Boston, for travel and study in Europe from 1961 to 1964. He had his first solo exhibition in New York City in 1970 at Reese Palley Gallery. He had a number of shows at the Betty Cunningham Gallery, New York in the 1970’s, as well as numerous international exhibitions, and also showed with the Washburn Gallery, New York, during the 1980’s. Cote has participated in survey exhibitions of painting at the American Federation for the Arts Whitney Museum of American Art. A Guggenheim Fellow, he has been awarded grants by the Creative Artists’ Public Service and National Endowment for the Arts. Cote’s work resides in the permanent collections of the Museum of Modern Art in New York, the Whitney Museum of American Art, the Dallas Museum of Art, and the Solomon R. Guggenheim Museum, among others. His work also resides in many corporate collections such as the Prudential Insurance Company, the Paine Webber Group and IBM in Armonk, NY.