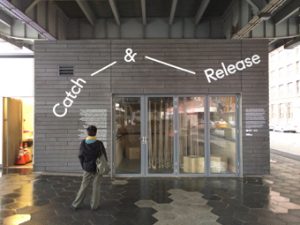 AIGA/NY Announces the Launch of Catch — & — Release, a participatory design project which is part of its <<Design/Relief>>initiative, conceived by its South Street Seaport Team New York, NY, January 6, 2014 – AIGA/NY is pleased to announce the launch of Design/Relief’s Catch — & — Release, an interactive installation that is part of a participatory design initiative aiming to help the neighborhoods of South Street Seaport, Red Hook, and the Rockaways imagine a more vibrant future for themselves as they overcome the lingering effects of Superstorm Sandy.

This special project of the New York chapter of AIGA (the nation’s leading professional association of graphic designers) explores the potential of design in defining and expanding creative placemaking to positively transform communities. Design/Relief is supported by an innovation grant from ArtPlace America. Catch — & — Release aims to capture, make visible and celebrate the resilient spirit and agency of the South Street Seaport community, one of the areas hardest hit by Superstorm Sandy.

The Catch — & — Release installation is temporarily set up, in a vacant space under the FDR at John Street, from January 11 until February 2, 2014. It offers a physical respite where neighbors, visitors and all are invited to share messages of gratitude. In this interactive space, visitors are performing a sort of ritual by which their written “Thank You” notes will be publicly “caught,” and elevated to create an installation that will become the visual symbol of this place. “As messages accumulate, this installation will become a visible symbol of the unity, shared visions and social network of the South Street Seaport community,” explains Yeju Choi, lead designer on the Catch — & — Release project.

A system of cordon and pulleys symbolizes the collective activation of relationships, an act that will help participants rediscover what makes them uniquely resilient. The design of the installation was largely inspired by the vernacular materials of the Seaport’s maritime activity. As a tangible design experience and a community engagement tool, the installation’s form encourages the expression of aspirations while fostering social bonds, creating new opportunities to shift perception about South Street Seaport’s future.

“With Catch & Release, we are embarking on a partnership with the seaport community while offering an intimate community engagement model beyond the community board. We are hoping to yield valuable insights to shape a longer-term dialog and help to imagine the Seaport as a more vibrant place,” says Laetitia Wolff, Design/Relief’s Program Director.

With information and emotions collected and shared throughout the box installation’s limited time and space, Catch&Release hopes to create a method to empower its community to have a say in its future. By “Catching” acknowledgements of gratitude through various related community engagement programming, and a mapping project, the project aims to “Release” this information for a second phase of design development and community engagement.

“Design is as much about the collaborative process and act of creating as it is the final artifact –and it is always about people. As AIGA enters its centennial year, the New York chapter is thrilled to celebrate design’s influence in society through community efforts such as our <<Design/Relief initiative>>in Lower Manhattan’s South Street Seaport,” says Wily Wong, President of AIGA/NY.