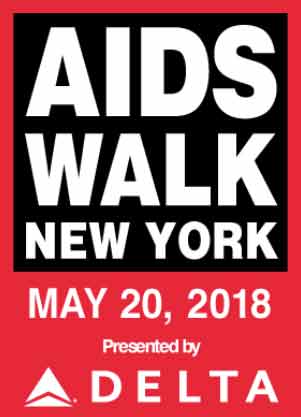 “”In its over 30 years, AIDS Walk New York has inspired nearly 890,000 people to walk and millions more to donate, raising nearly $150 million to combat HIV and AIDS. The funds raised at the event remain a vital lifeline sustaining the prevention, care, and advocacy programs GMHC provides for the thousands of men, women, and families affected by the disease in the tri-state area. The proceeds also benefit several HIV/AIDS service organizations that are able to participate as teams and raise funds through the Community Partnership Program (CPP).””

Visit gmhc.org to learn more about its life-sustaining programs and services.

An Opening Ceremony as well as a Post-Walk Show

FOR PEOPLE FACING HIV AND OTHER “PRE-EXISTING CONDITIONS”

New York, NY, May 21, 2017 – This year’s AIDS Walk New York (AWNY) drew an enormous crowd of 20,000 participants to Central Park. The event took on greater urgency in recent weeks in the wake of the American Healthcare Act (ACHA), the passage of which could cause millions to lose their health insurance.  The 10-kilometer walk benefited GMHC and dozens of other tristate area AIDS service organizations, raising $4,588,214 million.

“Thanks to our supporters, GMHC is leading the charge to demand access to healthcare – for those we serve, and for all Americans,” said Kelsey Louie, CEO of GMHC. “We issued the call, and AIDS Walk participants responded by showing up – to help people living with HIV; to help people in need of food, housing, and care; and to help certain elected leaders see what compassion looks like.”

“The noise, negativity, and nonsense out of Washington cannot drown out this demand from New Yorkers: We refuse to allow healthcare discrimination against people with HIV, diabetes, heart disease, and dozens of other ‘pre-existing conditions’,” said Craig R. Miller, AIDS Walk Founder and Senior Organizer. “We are fighting lawmakers that seek to strip away healthcare from millions. Our pre-existing conditions of compassion and unity will overcome efforts to divide and exclude.”

Also, for the first time, a 5-mile running route through Central Park was provided as an option for participants, most of whom walked a 10K course that traversed both Central Park and the streets of the Upper West Side.

About GMHC: Gay Men’s Health Crisis (GMHC) is the world’s first HIV/AIDS service organization. GMHC is on the front lines providing services to over 12,000 people living with and affected by HIV/AIDS. Programs include testing, prevention, nutrition, legal, workforce development, housing, mental health, and substance use services. GMHC also advocates for stronger public policies at the local, state and federal level with the goal of ending AIDS as an epidemic. For more information, visit www.gmhc.org.

About AIDS Walk New York: Since 1986, AIDS Walk New York has raised more than $150 million for HIV programs and services in the tri-state area, and has grown into the largest AIDS fundraising event in the world.  In 2017 alone, 20,000 participants, many of whom were members of more than 2,000 corporate and community teams, raised over $4.5 million for GMHC and dozens of other tri-state area AIDS service organizations. For more information, please visit http://ny.aidswalk.net/.

About MZA Events: AIDS Walk New York was founded in 1986 by Craig R. Miller and his organization of activists, MZA Events.  Miller is the AIDS Walk originator and has produced hundreds of public service campaigns and fundraising events, generating more than $400 million for major AIDS organizations throughout the country.  For more information, please visit mzaevents.com.

About Delta Air Lines: Delta Air Lines is New York’s largest carrier with more than 500 peakday departures to more than 130 destinations worldwide from its hubs at LaGuardia Airport and John F. Kennedy International Airport – including more destinations from New York State than any other airline. Delta has invested more than $2 billion in New York airport infrastructure, including a $1.4 billion international gateway at JFK’s Terminal 4. The airline is also building a $4 billion, state-of-the-art home at LGA. Delta offers more first class seats than any other carrier in New York and the most seats between JFK and Los Angeles/San Francisco, with flights that deliver flat-bed seats and chef-inspired menus in Delta One, complimentary food and beverage in Delta Comfort+, and free meals in Main Cabin. Delta’s three metropolitan area airports carried more than 28 million customers in 2016, up from 26 million in 2015. Delta and its nearly 10,000 New York-based employees are part of the fabric of the New York.