Lovesick? Heartbroken? There’s a cure for that. 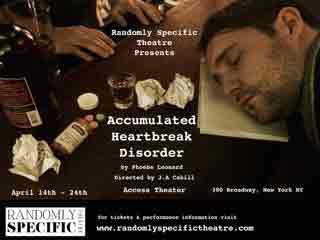 New York, NY (March 7th, 2016) – The world premiere production of Accumulated Heartbreak Disorder will play at the Access Theater from Thursday, April 14th until Sunday, April 24th. The play is a dark press room comedy by Phoebe Leonard which will be directed by J.A. Cahill.

Accumulated Heartbreak Disorder is set in the offices of Pulse magazine and the nearby dive bar where the journalists spend much of their time and most of their money. Our play tells the story of hard edged magazine editor Samantha and heartbroken environmental reporter Rob, as they investigate a pharmaceutical company that claims to have discovered a “cure” for heartbreak. As they are alternately assisted and encumbered by Sam’s Girl Friday Millie, garrulous magazine owner Tony and wordly wise bartender Barry, fast-paced hilarity ensues.

Randomly Specific Theatre is a New York City based independent  theatre company founded in 2014.  Our mission is to produce new plays with an emphasis on excellence in writing and script development and high quality production aesthetic. Following the success of Secondary Pitch (2014) and Learning to Skip (2015) by Larry Phillips, Randomly Specific is moving downtown to the 60 seat Access Theatre at 380 Broadway.

Australian theatrical credits include Telling Tales, The First Stone Thrown, A Line In The Dust, Love, Death and A Little Madness and A History Of World Theatre for the Hayes Gordon Repertory, Angry Young Woman In Low Rise Jeans With High Class Issues for Stella Green Productions, Girl Interrupted, Morning Sacrifice, Ladies at The Alamo and Road for Ensemble Studios, and Stairwell (Writer/Actor) for Operating Theatre.  Film and Television credits include ‘Home and Away’ (Seven Network), ‘Housos’ and ‘Swift and Shift Couriers’ (SBS), ‘2010’, ‘Game On’ (Writer/Actor), ‘The Other Woman’ (Writer/Actor) and ‘Room mates’ (Director/writer).

Phoebe is a graduate of the Ensemble Studios, Australia and the New York Film Academy Screenwriters Program.  ​

J.A. Cahill (Director) is thrilled to have the opportunity to work yet again with her friend Phoebe Leonard. In their last collaboration she directed a sold out season of Phoebe’s play Stairwell. Having enjoyed success in acting, directing, choreography, singing, dancing and writing, some of Jo’s credits include: The Boys Next Door; After The Ball; Mother’s Day, written and directed by Geoff Barron; Talking Heads; Nunsense and A Conversation. Jo is a recipient of the Jeffrey Joynton Smith Award for acting.

She has directed Gruesome Playground Injuries; Graceland and Asleep on the Wind;  Showtime and For the Love of Mic, By George! She has been Assistant Director on Cruise Control for which she was touring director, Proof, Blue Orange, and Absent Friends; she had the distinct pleasure of being the assistant to the director, David Esbjornson on Driving Miss Daisy with Angela Lansbury, James Earl Jones and Boyd Gaines. She has written the play Cocktales and hopes to bring that to the stage next year. Jo is a founding director of the independent theater company Operating Theatre.

Peter Buck Dettmann (Rob) studied English and Theater Studies at Yale University. He has worked as an actor on stage, film and radio in Sydney and New York, and has trained with NIDA in Sydney and the Stella Adler Studios in Manhattan.

​He appeared in Randomly Specific Theatre’s inaugural production of Secondary Pitch, Revenge and Guilt for After Midnight Productions, Othello at the American Theater of Actors, Merchant of Venice with the Oxford Shakespeare Company, Angry Young Women in Low Rise Jeans with High Class Issues for KADM Productions, MacB3th at NIDA, Traitors, A Clockwork Orange, The Vampire Lesbians of Sodom and Don Juan in Soho with the New Theatre, Romeo and Juliet with the Globe Shakespeare Centre Australia, and References to Salvador Dalí Make Me Hot at the Tap Galleries. He also originated the title role in The Hideous Demise of Detective Jericho Slate at the CRACK Theatre Festival and the Sydney Fringe Festival, as well as in a five part radio adaptation for FBI Radio.

Larry Phillips (Barry) is an actor, playwright, and founding member of Randomly Specific Theatre. Recent acting credits include: Learning to Skip and Secondary Pitch for Randomly Specific Theatre, Arbuckle Syndrome for 2015 Thespis Festival, Raised by Wolves and Sheep for Emerging Artists & Manhattan Rep., Animal Kingdom for Hunger and Thirst, The Why Overhead for Zootopia, Hellcab for Rising Sun Performance Company and Farewell to Sanity for Original Binding.

As a playwright his produced work includes: Arbuckle Syndrome (2015 Thespis Festival), Secondary Pitch (Randomly Specific Theatre), and Learning to Skip (Randomly Specific Theatre).The Rise of Mediocrity premiered in February 2016 at the Venus/Adonis Festival.  Other plays currently in development include: Last Chance for Mama, Koalas are Dicks, This is Mark/c, and The Other Harvey.

Larry has taken part in training programs with both The Groundlings and Second City in LA. He holds a BFA from Montclair State University.

Maite Uzal (Dr Martinez) graduated from the Musical Theatre Conservatory Program at the American Musical and Dramatic Academy. Before that, she was an attorney and Law teacher in Madrid, Spain, where she appeared in productions of Les Miserables (Fantine) and The Lion King (Rafiki). NYC credits include Hyppolitus, Death Of A Salesman and Uncle Vanya (Pearl Theater Company). She also shot the feature film, “Little Galicia” as well as the award winning short “Waist Up”. Most recently she has originated the role of Semíramis at Repertorio Español, role which she has earned her a Latin ACE Award, and has collaborated with The Living Theater.

Patrina Caruana (Millie) grew up in Westfield, New Jersey and graduated with honors from NYU’s Tisch School of the Arts with a BFA in Drama and a minor in history. She received additional classical theatre training at the Shakespeare Theatre of New Jersey and is currently an artist in residence at Hudson Warehouse ( NYC’s “other free Shakespeare in the park”) having performed several roles including Lavinia in Titus Andronicus and Cecily in The Importance of Being Earnest.  She is passionate about educational theater and has travel to 38 states on two national tours with Artspower.

She plans to reach all 50 before she turns 30! She was featured in season three of HBO’s “Boardwalk Empire” and other favorite roles include Ado Annie in Oklahoma!, Sue Snell in Carrie: The Musical, and Thea in Spring Awakening.

Dean is also the creative director of Drake Creative, a multi-disciplinary design firm in the Hudson Valley, and serves on the board of directors of Spark Media Project in Poughkeepsie.

Kevin Duchon (Lighting Design) is a graduate of The Ohio State University with a Bachelors in Theatre, where his designs lit the Ohio theatrical scene and gained notice of the Columbus Arts Council leading to his years with the Highland West Players company until his move to New York City in 2013.  Specializing in chandeliering, Kevin recently completed his ten year masterpiece, Lumenotica, and continues to design fixtures with Pure Illumination Lighting company.  During his years with Pure Illumination, Kevin has lit West Elm product proposals, a Macy’s runway show, and worked with the team at ABC’s Extreme Makeover: Home Edition, as well as numerous private functions.  Kevin is ecstatic to be working with Randomly Specific Theatre.