In 2017 FALL FOR DANCE FESTIVAL Presenting

A WORLD PREMIERE BY TROY SCHUMACHER 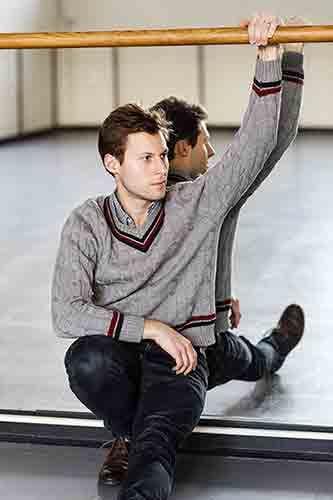 Miami and NY, NY (August 9, 2017) – Miami City Ballet will present a world premiere ballet choreographed by Troy Schumacher as part of the opening program of New York City Center’s 2017 Fall for Dance Festival on October 2 and 3 at New York City Center (55th Street between 6th & 7th Avenues). The new work has been commissioned by City Center and is a meditation on childhood, set to Francis Poulenc’s Concerto for Two Pianos in D Minor and featuring a cast of 14 Miami City Ballet dancers.

“We are thrilled to perform in our third Fall for Dance Festival and look forward to returning to the City Center stage, where the company made its New York debut in 2009 and where so many of Mr. Balanchine’s ballets had their premiere,” said Lourdes Lopez, Miami City Ballet’s Artistic Director. “We are grateful to NYCC for commissioning this new work from Troy Schumacher, one of the country’s most exciting young choreographers.”

“The Miami City Ballet dancers embody musicality and athleticism at a level I find to be thrilling and inspiring, said Troy Schumacher.  “Each of their personalities offers something wonderful to work with, and we are having a wonderful time in the studio.”

The Fall for Dance Festival has received international acclaim for its quality, innovation and success in engaging new and younger dance audiences. Since its inception, the Festival has presented over 200 companies and introduced more than 300,000 newcomers and dance enthusiasts to an eclectic mix of choreographers and performers. The 2017 Fall for Dance Festival will feature 20 acclaimed dance companies and artists from around the world from October 2 through 14. All tickets are $15 and go on sale Sunday, September 10 at 11am. Tickets can be purchased online at NYCityCenter.org, by calling 212.581.1212, or in person at the box office.

Troy Schumacher is an American choreographer, dancer, and director living in New York City. He has received choreographic commissions from New York City Center, New York City Ballet, 92nd Street Y, Danspace Project, Performa, School of American Ballet, New York Choreographic Institute, among others. Schumacher is active in other cultural media and has choreographed work for Google in collaboration with Jeff Koons, Sony PlayStation, Capezio featuring Maddie Ziegler, HP, Aritzia, CR Fashion Book, Tom Ford, and The New York Times Men’s Style Section. As a soloist with New York City Ballet, Schumacher has performed numerous principal roles in George Balanchine’s A Midsummer Night’s Dream and Mozartiana, Peter Martins’ Swan Lake, and Jerome Robbins’ Four Seasons and Interplay. Schumacher is Artistic Director of BalletCollective, the company he founded in 2010 with the mission to present ballet-based work created in collaboration with the choreographer, dancers, musicians and artists who engage in an ongoing give and take process. Schumacher has choreographed and premiered two commissioned ballets for the New York City Ballet: Clearing Dawn in 2014, featuring music by Judd Greenstein and costumes by Thom Browne, and Common Ground in 2015, featuring a commissioned score by Ellis Ludwig-Leone and costumes by Marques’ Almeida. His third NYCB commission will premiere in September 2017. http://www.troyschumacher.com

Miami City Ballet, now in its 32nd season, has been led by Artistic Director Lourdes Lopez since 2012.  Lopez was recently named one of “The Most Influential People in Dance Today” by Dance Magazine.  The Company’s 2017 season opens in Miami on October 20 with a 50th Anniversary celebration of George Balanchine’s Jewels, and also features a new production of George Balanchine’s The Nutcracker®, designed by acclaimed Cuban-American designers Isabel and Ruben Toledo; a tribute to Jerome Robbins, in honor of the 100th Anniversary of his birth; a world premiere by Brian Brooks,  inaugural Choreographer in Residence at the Harris Theater in Chicago  the company premiere of Alexei Ratmansky’s Concerto DSCH; and three additional works by George Balanchine.

MCB was founded in 1985 by Miami philanthropist Toby Lerner Ansin and Founding Artistic Director Edward Villella. The Company has 51 dancers and a repertoire of more than 100 ballets. MCB performs for nearly 100,000 patrons annually during its South Florida home season in Miami, Fort Lauderdale, West Palm Beach and Naples, and tours to top theaters domestically and internationally.