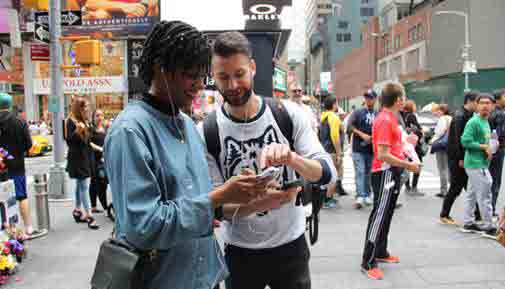 Times Square Arts and Artists Mendi + Keith Obadike present a kick-off performance for Compass Song, an app-based public sound artwork inspired by Times Square, on Wednesday, July 12th at 11:00am on the Broadway Pedestrian Plaza between 45th and 46th Street, where 16 performers will recreate the city’s sounds and then begin singing the freedom song “Walk With Me” before dividing into four groups – each going into a different direction (north, east, south and west.)

Compass Song is a Times Square specific app where you can hear the bustling sounds of the area mixed with poems about searching for freedom, stories about navigating the city, and cross-cultural myths about the cardinal directions (north, east, south and west). The piece also quotes and reworks the African-American spiritual and Civil Rights freedom song “Walk with Me”, spreading the piece out over several blocks of the city.

Compass Song launches on July 12th and is FREE to download. For more information, visit CompassSong.com