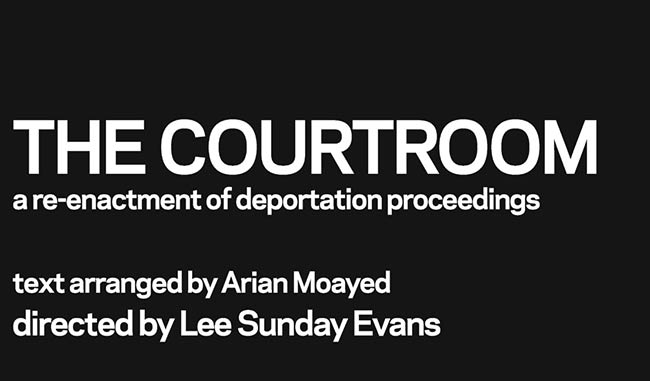 A Re-Enactment of Deportation Proceedings at The Cooper Union on December 9, 2019

The event is free and open to the public. General public should reserve a space at http://bit.ly/courtroomcu. Please note seating is on a first come basis; an RSVP does not guarantee admission as we generally overbook to ensure a full house. The house will open at 6:00pm; at 6:45pm, those on standby will be allowed to claim any remaining seats, so please plan a timely arrival.

An intimate encounter with our nation’s immigration court system, The Courtroom follows Elizabeth Keathley, an immigrant from the Philippines who was married to a U.S. Citizen came to this country in 2004 on a K3 Visa. After inadvertently registering to vote at the DMV in Bloomington, IL, receiving a voter registration card in the mail, and voting, her removal proceedings were set in motion. Her case began in Immigration Court and was eventually heard by the U.S. Court of Appeals for the 7th Circuit. The Courtroom is performed entirely verbatim from court transcripts.

Arian Moayed is the co-founder of Waterwell, a civic-minded and socially conscious theater and education company, as well as a partner at the for-profit Waterwell Films. Recent Waterwell productions in addition to The Courtroom include The Flores Exhibits, a series of videos in which artists, lawyers, advocates, and immigrants read the sworn testimonies of children held in detention facilities at the U.S./Mexico border (flores-exhibits.org), Fleet Week Follies, an annual festival of music, food, and kid-friendly activities, free to military members and their families, and a dual-language Hamlet (Arian played the title role). At the Waterwell Drama Program, over 250 students per year receive world-class arts training and education in advocacy at the Professional Performing Arts School, all free of charge. With Waterwell Films, Arian has written/directed the Emmy-nominated, short-form thriller, The Accidental Wolf, which stars Kelli O’Hara (theaccidentalwolf.com). Notable acting credits include The Humans (Drama Desk Award), Guards at the Taj (Obie Award), Bengal Tiger at the Baghdad Zoo (Tony nomination), and Succession (HBO).

Lee Sunday Evans is a two-time Obie Award-winning director and choreographer and the artistic director of Waterwell. Her recent productions include: Dance Nation by Clare Barron (Playwrights Horizons), Intractable Woman by Stefano Massini, Caught by Christopher Chen (The Play Company), The Things That Were There by David Greenspan (The Bushwick Starr), The Winter’s Tale (The Public Theater’s Mobile Unit), Macbeth (Hudson Valley Shakespeare Festival), and more. Additionally, she creates collaboratively devised work with CollaborationTown; their next production The Riddle of the Trilobites is coming up at the New Victory Theater. Her work has been presented/developed at Baryshnikov Arts Center, Sundance Theater Lab, BAX, CATCH, LMCC, Robert Wilson’s Watermill Center, and Juilliard among others. She received the 2017 SDC Breakout Award, and the 2016 Susan Stroman Directing Award from The Vineyard Theater.

The Great Hall of The Cooper Union has stood for more than a century as a bastion of free speech and a witness to the flow of American history and ideas. When the Great Hall first opened, it was the largest public gathering space in New York City. Leading thinkers and numerous historical figures have held the stage including Frederick Douglass, Susan B. Anthony, Elizabeth Cady Stanton, Mark Twain, and more.Before they were elected, Presidents Lincoln, Grant, Cleveland, Taft, Theodore Roosevelt, and Barack Obama all spoke in the Great Hall. In fact, Abraham Lincoln gave his famous “Right Makes Might” speech that propelled him to the White House there. More recently, groups like the United Nations, PEN America, the Public Art Fund, and the Architectural League of New York and more have held events on its stage.

Waterwell (Lee Sunday Evans, Artistic Director; Adam J. Frank, Managing Director; Heather Lanza, Director of Education; Arian Moayed, co-founder and Board Chair) is a non-profit, civic-minded theater and education company that strives to prove itself a vital presence in the lives of its audience by remaining always responsive: responsive to the events affecting the world, to changing modes of expression, and to the individuals attending each performance. Through entertainment and arts education, Waterwell hopes to inspire audiences and students to change their lives and the world in which they live. Founded in 2002 by Arian Moayed and Tom Ridgely, the company’s blend of music, theater, and social dialogue has been nominated for a Drama Desk, a New York Magazine Culture Award, and a Village Voice Best of NYC. The New York Times hails the company’s work as, “brilliant, original, and inspired.