A CELEBRATION OF THE LIFE AND WORK 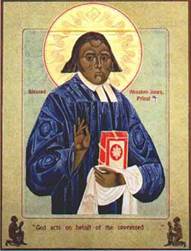 The New York Chapter of the Union of Black Episcopalians and the Anti-Racism Committee of the Episcopal Diocese of New York, along with congregations from around New York, will join together for a celebration of the life and work of Blessed Absalom Jones on Saturday, February 8th, 2014 at 10:30 a.m. at The Cathedral of St. John the Divine, 1047 Amsterdam Avenue (at 112th Street).

This service is open and welcoming to all, in commemoration of Jones’s life and perseverance against exclusion, intolerance and oppression.