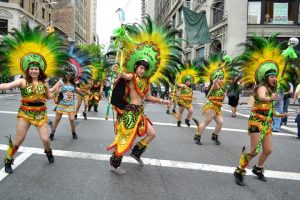 Tens Of Thousands Of Dancers Limber Up For The Most Multi-Cultural Event In The New York City Calendar: The Ninth Annual Dance Parade And Festival

New York, January 18, 2015 – Tens of thousands of dancers are limbering up in classes and clubs in preparation for the Ninth Annual Dance Parade and Festival in New York on Saturday May 16th 2015. The annual event brings together dancers from around the city and beyond to showcase dance styles in a multi-cultural, rhythmic-infused magical display of human movement, art and color. Dance styles reflect the cosmopolitan legacy of the city and the elastic inventiveness of the form include: African, Balkan, ballet, bhangra, Bolivian Tinkus, drill team, hip hop, Jamaican Dance Hall, modern, Morris, Peruvian, roller disco, samba, swing, Tahitian, tango and zouk.

“What I love about the Dance Parade is that it’s one of the most culturally diverse and ethnic events in the city … Hopefully it’s what heaven is like.” roller blading figure-skater, Marini Halasa.

The Parade will unite dancers of all ages under the theme Live Free & Dance! beginning at 1pm on 21st Street and Broadway, moving south through Union Square, into Astor Place where each group dances before a Grandstand. Turning east on St. Mark’s Place (8th Street), Parade dancers’ salsa, swing and two-step their way into Tompkins Square Park in the East Village for the DanceFest – a fourhour program of free dance performances, workshops, lessons and social dancing, is scattered throughout the Park.

Parade registration is open to everyone, $50 for groups and free to individuals of all ages and styles of dance. Earlier registrants are dance groups traveling from as far away as North Carolina, Texas and Virginia and internationally from Japan.

“For one day only, the streets of New York come alive with the energy and artistry of human movement. Dance Parade honors dance in all its forms,” says Greg Miller, Executive Director of Dance Parade, Inc. “In the melting pot of so many diverse New York culture, our passion for dance can be celebrated all in one place. We want to educate the public in a way that inspires folks to take on this fun and healthy activity. “

Grand Marshals open the parade at a ribbon cutting ceremony and are selected for their contribution to the dance arts as dance innovators, choreographers or as supporters and they mingle with dancers on the day. Previous grand marshals include Savion Glover, Hex Hector, Jawole Willa Jo Zollar, Dr. Charles “Chuck” Davis, Jacqulyn Buglisi and Louie Vega. Leading out the parade will be young people who participated in a five-week education program of dance workshops sponsored by New York City Departments of Parks and Recreation and funded by New York City Department of Cultural Affairs. The workshops run in urban centers in Jamaica, Queens, Bedford Stuyvesant, Brooklyn and Washington Heights and East Harlem, Manhattan.

“It’s exciting to see so many young people turn up for our dance workshops,” said Shireen Dickson, Dance Parade’s Education Coordinator. “The biggest thrill is watching them take classroom exercises into a Parade presentation, and then to watch their minds open as they become part of a larger community of dancers, all while making their ‘Broadway debut!’”

No Parade would be complete without the New York Dance Police – a volunteer group of men and women who inspire the crowds to dance and celebrate the spirit of Dance Parade. Anyone caught not dancing is given a ticket which includes a fine to attend a free dance class in the city.

Dance Parade originated as a response to a decision in lawsuit seeking to overturn New York City’s racist 1926 Cabaret License Law that restricted social dancing. A New York State Supreme Court Judge ruled in 2006 that social dancing was not considered “expressive activity” protected by the State Constitution’s freedom of expression amendment. Dancers and dance groups got together to create a vibrant cultural and dance event in response to the decision, and Dance Parade New York was born. Dance Parade New York is an entity of Dance Parade Inc, a 501(c)(3)non-profit organization whose charitable mission is to promote dance as an expressive and unifying art form, while educating the public about opportunities to experience dance. The organization celebrates diversity by showcasing all forms of dance around the world through sponsorship of a yearly, citywide Dance Parade and Dance Festival. Additional programs include education outreach, residencies and artistic partnerships to aid in increased public awareness, and the showcasing of dance in multiple ways.