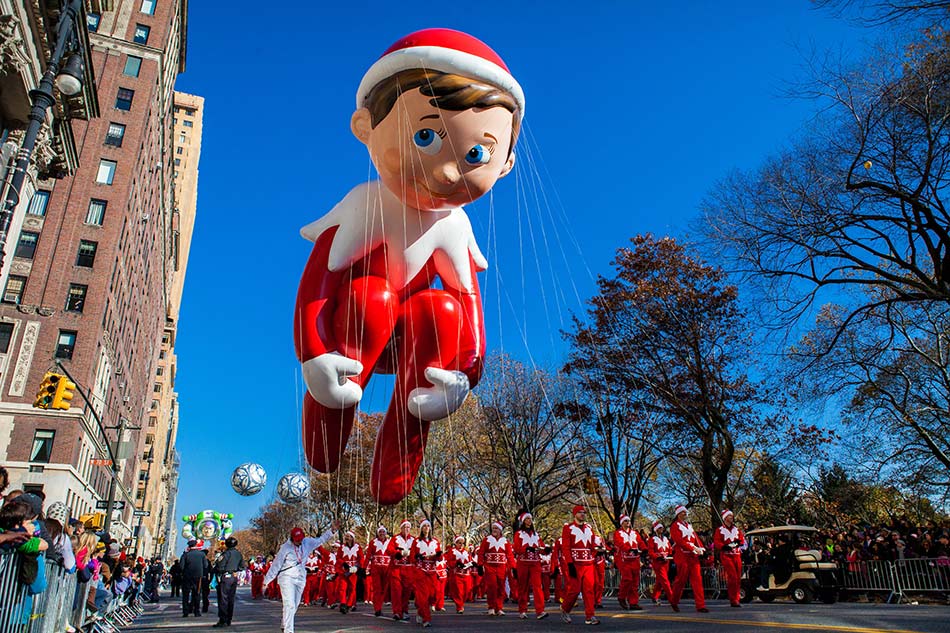 Don’t forget, there’s also the Balloon Inflation that goes on on the day prior to the parade. It’ll be taking place along the blocks surrounding the Museum of Natural History by Central Park.

The official Press Release can be seen just below this Route Map. 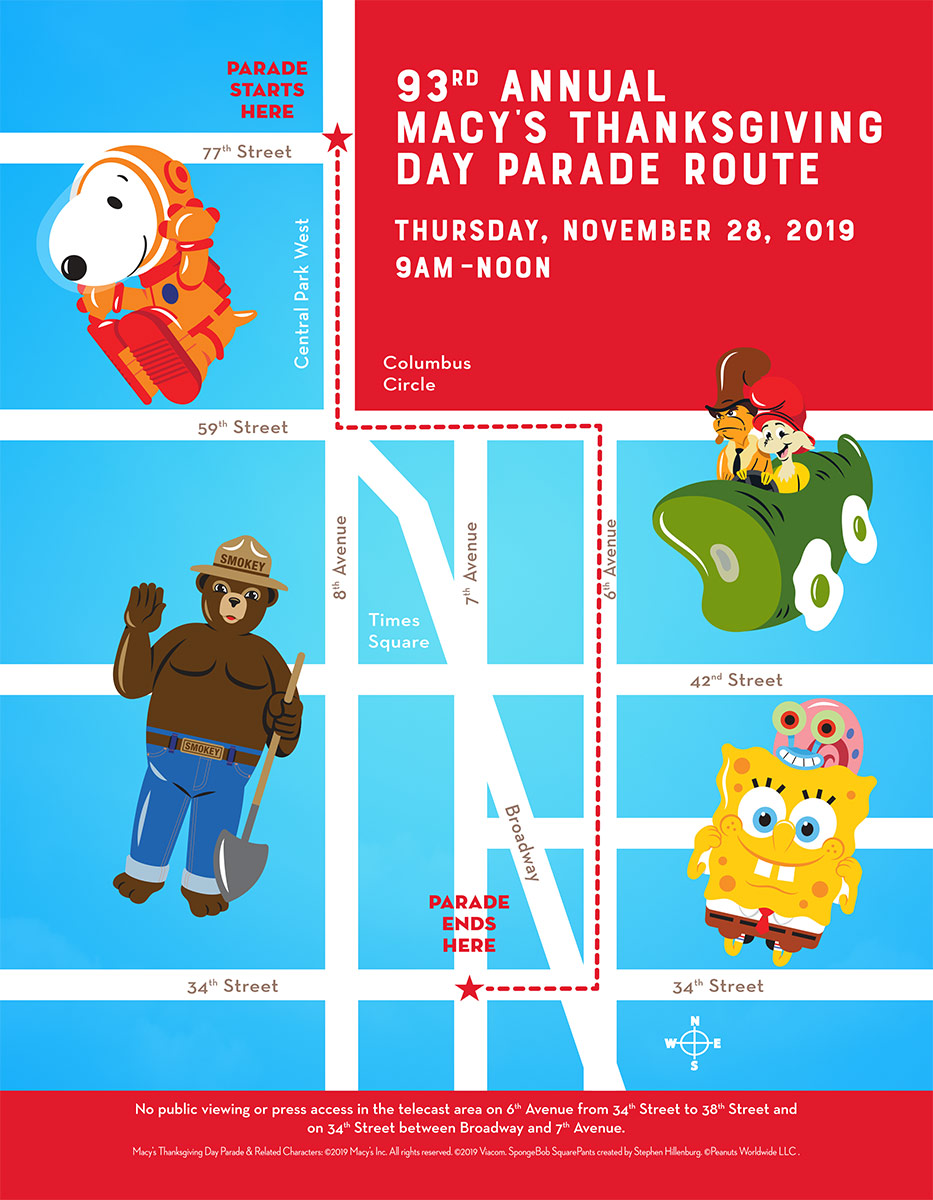 A Spectacle Like No Other: The World-Famous Macy’s Thanksgiving Day Parade® Kicks Off The Holiday Season

NEW YORK– (BUSINESS WIRE) A spectacle like no other awaits millions, as the 93rd Annual Macy’s Thanksgiving Day Parade®, the nation’s most cherished holiday tradition, kicks off the holiday season. On Thursday, November 28 at 9 a.m., the time honored phrase Let’s Have a Parade™ will ring from the starting line as the march of fantasy takes to the streets of New York City. With more than 8,000 volunteers dressed as clowns, guiding the flight of larger-than-life character balloons, transporting spectators to new worlds on signature floats, bringing the beat in the nation’s best marching bands and entertaining the crowds as part of dazzling performance groups, the annual march is jam-packed with entertainment. With more than 3.5 million spectators in New York City and more than 50 million television viewers nationwide, Macy’s Thanksgiving Day Parade is America’s premiere holiday celebration. 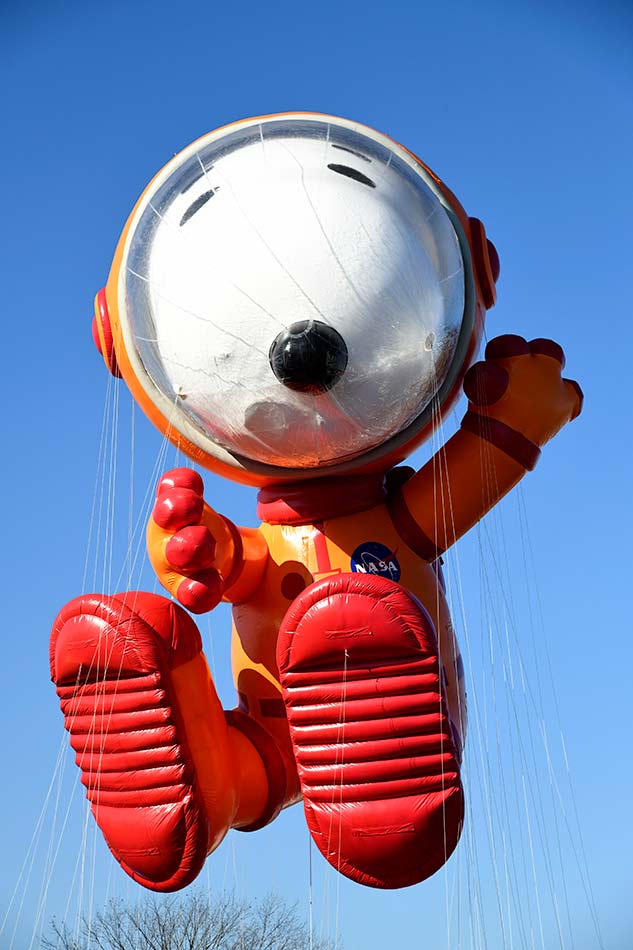 “Spectacle is synonymous with the Macy’s Thanksgiving Day Parade and each year we aim to create an even bigger one than the last, with incredible must-see entertainment for millions of spectators nationwide,” said Susan Tercero, executive producer of Macy’s Thanksgiving Day Parade. “Featuring an amazing line-up of high-flying character balloons, jaw-dropping animated floats, world-class marching bands and performance groups, artists covering a variety of musical genres, and of course, the one-and-only Santa Claus, we are ‘Parade Ready’ and can’t wait to take to the streets of New York City to once again herald the arrival of the holiday season.”

For more than nine decades, the magic of the holiday season has begun with the march of the Macy’s Parade, as the spectacle enthralls the nation with its signature mix of whimsical elements and dazzling performances. For the 93rd edition, the line-up will feature 16 giant character balloons; 40 novelty balloons, heritage balloons, balloonicles, balloonheads and trycaloons; 26 floats; 1,200 cheerleaders and dancers; more than 1,000 clowns; and 11 marching bands.

New giants joining the line-up this year include Astronaut Snoopy by Peanuts Worldwide, Green Eggs and Ham by Netflix, and SpongeBob SquarePants & Gary by Nickelodeon. In celebration of his 75th birthday, a heritage balloon and fan favorite will return to the Parade as Smokey Bear once again takes to the skies over Manhattan. 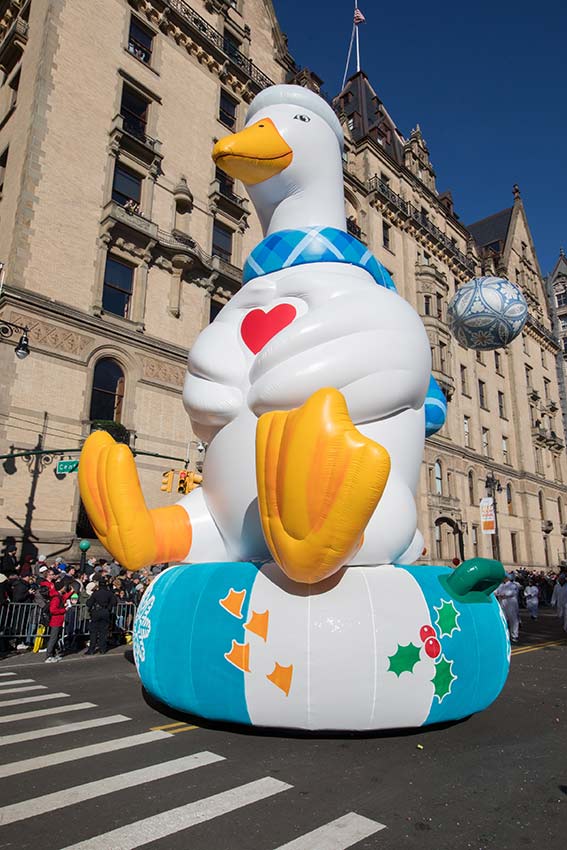 In 2005, the Macy’s Parade began to feature what would become a collection of high-flying artwork created in collaboration with renowned contemporary artists. The special series, entitled Macy’s Blue Sky Gallery, has featured some of the art world’s finest creators. This year, for the eighth edition of the series, the world’s most renowned female contemporary artist will take her iconic art to new heights as Yayoi Kusama joins the Macy’s Parade with her Love Flies Up to the Sky balloon. The design was developed by the artist from face motifs that appear in her “My Eternal Soul” series of paintings–a body of work that she began in 2009. Vibrant and animated, the paintings embody Kusama’s innovative exploration of form and revolve around a tension between abstraction and figuration. The artist’s signature dots — which recur throughout her practice — are also featured prominently in the Macy’s Parade balloon design. Previous balloons in the Macy’s Parade Blue Sky Gallery series have included works from famed artists Tom Otterness, Jeff Koons, Keith Haring, Takashi Murakami, Tim Burton, KAWS, and FriendsWithYou™. 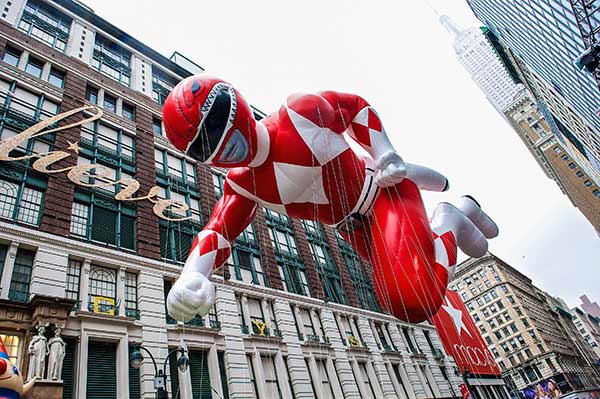 Conceived and crafted by the incredible artisans of Macy’s Parade Studio – a design and production facility that includes carpenters, engineers, electricians, painters, animators, sculptors, metal fabricators, scenic and costume designers – this year’s line-up of floats sets an unparalleled stage for entertainment. Gliding down Manhattan, the Parade’s signature floats transport spectators to worlds of wonder through creative design, engineering, and skillful construction. While they may seem to float down the Parade route as three stories tall and several lanes of traffic wide stages, the magic is truly in the design as these floats are built to collapse to no more than 12 ½-feet tall and 8-feet wide in order to travel safely from the New Jersey home of the Parade Studio to the Manhattan starting line via the Lincoln Tunnel each Thanksgiving eve.

Returning for a third year by popular demand, the Macy’s Singing Christmas Tree by Delta Air Lines will feature the harmonious voices of more than 100 Macy’s colleagues and friends from Delta hailing from across the nation and the world. Performing an original song to celebrate the start of the holiday season, the golden-voiced chorus will touch the hearts and uplift the spirits of millions.

STRIKE UP THE BAND AND DANCE

Entertaining the crowds with their signature exuberance will be the Parade’s signature large and specialty performance groups. Joining the line-up this year are the teen dancers and cheerleaders of Spirit of America Dance Stars and Spirit of America Cheer. These groups together feature more than 1,200 of the very best performers recruited from hometowns nationwide. Days before Thanksgiving, they will gather for the first time in New York City to rehearse their numbers as a group, ahead of their once-in-a-lifetime national spotlight. Adding some wacky 1980s style dancing will be the hilarious 610 Stompers (New Orleans, LA), with modern dance youth talent showcased by The Alvin Ailey School (New York, NY) and the tap dance theatrics of children from The Nice List (New York, NY). Rounding out the performance group line-up and joining select talent performances will be Gamma Phi Circus (Normal, IL), Manhattan Youth Ballet (New York, NY), the dance stars of the world-renowned in-school arts education program National Dance Institute (New York, NY) and Young People’s Chorus of NYC (New York, NY).

The Macy’s Thanksgiving Day Parade is the nation’s biggest and most anticipated holiday celebration. Broadcast nationally on NBC, with millions of families nationwide tuning in to watch the excitement unfold, the TODAY Show’s Savannah Guthrie, Hoda Kotb and Al Roker will host the three-hour broadcast from 9 a.m. – noon (in all time zones).

To kick off the revelry, a special must-see opening number featuring a who’s who of actors, singers, dancers and more, all joined by the cast and Muppets of Sesame Street, will start the Thanksgiving Day party with a smash.

Following the opener, on 34th Street, Broadway’s best shows will take a star turn in front of Macy’s famed flagship with special performances. In addition, the show-stopping Radio City Rockettes® will bring their signature high-kicking magic to Herald Square.

For the fourth year, Macy’s, along with NBCUniversal and Verizon, will give viewers an up close and personal second screen experience of the Parade with a 360-degree livestream on Verizon’s YouTube page. The stream will go live at 8:30 a.m. EST at www.youtube.com/verizon and will run through noon EST. With exclusive access to cameras along the entire Parade route, online spectators will get a glimpse of the magic behind the scenes, as well as a preview of what’s to come as the Parade marches down the streets of Manhattan.

For spectators in New York or those traveling to the city to see it live, the 93rd Annual Macy’s Thanksgiving Day Parade begins at 9 a.m., kicking off from 77th Street and Central Park West. The procession will march to Columbus Circle, turn onto Central Park South and then march down 6th Avenue/Avenue of the Americas. At 34th Street, the Parade will make its final turn west and end at 7th Avenue in front of Macy’s Herald Square.

This Thanksgiving, the Macy’s Thanksgiving Day Parade will bring millions of spectators a dazzling celebration like no other. Start the countdown, in 5, 4, 3, 2, 1 … Let’s Have a Parade!