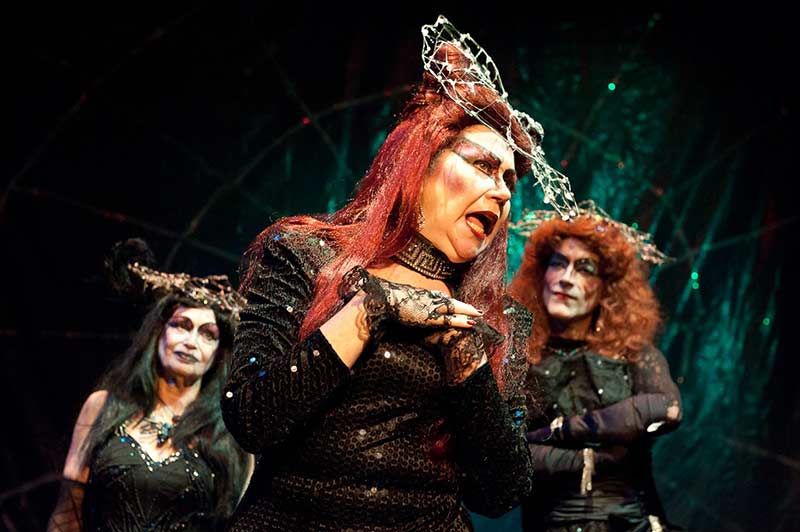 Theater For The New City Holds Its

Underground stars perform each year in TNC’s Halloween Cabarets.
Guests will see and be seen and celebrate the Night of Nights.
Celebrants will sink fangs into Halloween delicacies in The Witches’ Cauldron 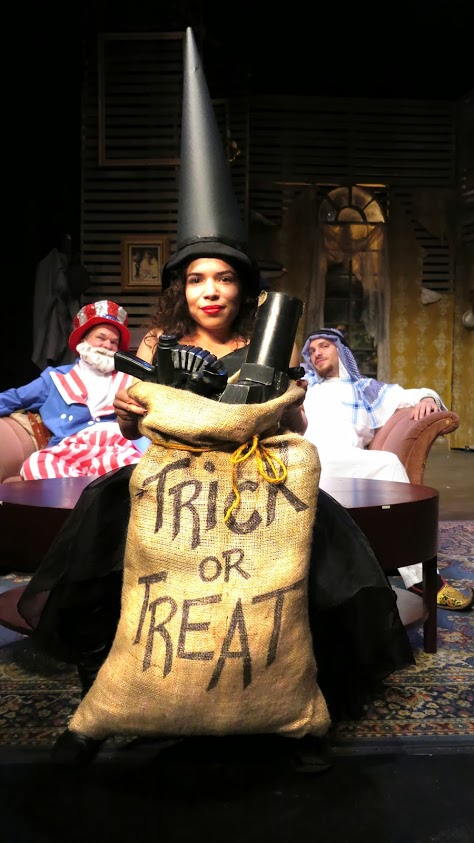 NEW YORK — Nonstop theater, a costume competition and ballroom dancing will bewitch the East Village October 31 in the Village Halloween Costume Ball, which is presented annually by Theater for the New City (TNC), 155 First Avenue. This unique festival continues as a grand coming-together for real witches, everyday New Yorkers and artists alike. An explosive fall tradition, it is always held on the actual night of Halloween and celebrates artistic creation and fertilization.

The one-night fiesta takes over all four of TNC’s theater spaces, plus its lobby and the block of East Tenth Street between First and Second Avenues. Customarily over 1,500 wildly-clad celebrants gather for big-band dancing, dining, showing off costumes and viewing acts from the cutting-edge of Cabaret and Theater. Admission is $20; costume or formal wear is required. Once inside, everything is free except food and drink, which are graveyard dirt-cheap. Doors open at 7:30 PM and indoor entertainment begins at 8:00 PM. There will be two continuously-running cabarets offering theater all evening.

Outdoor entertainment, free to the public, will start at 4:00 PM, including R&B and Dixieland bands, fire eaters, jugglers, storyweavers and stilt dancers, all free to the public and a gift from TNC to its neighborhood. Attractions will include the three piece band, “Fiddler and the Crossroads” with Greg Holt (a Blues Hall of Fame fiddler), Charlie Giordano (accordion player for Bruce Springsteen) and Roger Stoltz (suitcase drums). They will perform Cajun original music and Cajun-American versions of works by Johnny Cash, Elvis Presley, Bob Dylan and others. Also featured will be Star 69 (an R&B band led by Rob Varcony), Matt Angel, Joe Bendik, George Bellici, Urgent Music Unit and Michael David Gordon Band (classic pop rock songs). Emcee is Mary Tierney. Outdoor performances culminate in “The Red and Black Masque,” an annual Medieval ritual show written by Arthur Sainer, scored by David Tice and directed by Crystal Field which is performed each year by torchlight at 7:00 PM.

Indoors, a list of cutting-edge performers of many disciplines will provide entertainment. Penny Arcade and COBU (an all-women Taiko dance and drum group) head the list of over 70 acts that will appear.

The House of Horrors, designed and run by “Zen,” is in the theater’s lower level. Revelers will be put through a maze and duly horrified.

Laraine Goodman and The Mad Tappers will tap dance their way through the lobby.

At the Champagne Bar, libations will be served by vampires who will awaken periodically for the task.

Scattered through the event will be stilt dancers, jugglers, fire-eaters, Vaudeville playlets, Burlesque and Hellsouls. Portions of the lobby will be set aside for Astrology/Numerology readings. Phyllis Yampolsky will throw the I-Ching. Fortune Telling is by Penny Diara. Videos are by Terry Ferrari. Rocco (a Frank Sinatra impersonator) will croon “Songs Sinatra sang.”

With its Witches’ Cauldron, the event can justifiably claim to have downtown’s most sensational Halloween cafe with a variety of American and international delicacies available at peoples’ prices. Holiday dishes are contributed by neighboring East Village restaurants, some with celebrity chefs. You can gobble couscous from a coffin lid beginning at 7:30 pm while enjoying spine-tingling performances by performance artists, songwriters, poets and variety artists including Arthur Abrams, Norman Savitt, Richard West and Susan Mitchell, The Head Peddlers and Sarah Lilly. The space is designed by Susan Hemley and Desiree Conston with lighting design by Alexander Bartenieff. Emcee is Elizabeth Ruf.

The entire facility will be elaborately rendered for Halloween, featuring intricate and massive environments by leading theatrical scenarists, sculptors, and artists including Lytza Colon, Walter Gurbo and Kanako Nagayama. Costume design is by Susan Hemley. Audiences will pass through walls decorated by 17 muralists. Lighting design is by Alexander Bartenieff, Matt Angel and Bruce Kraemer.

The annual costume judging begins at midnight with the “Monsters and Miracles Costume Parade,” as all revelers are invited to march past a panel of celebrity judges including Tom Attea, Andrea Fulton, Chino Garcia, John Gilman, Robert Heide, John Jiler, Phoebe Legere, Eduardo Machado, Miguel Maldonado, Rome Neal, Lorcan Otway, Bina Sharif, Sabura Rashid, Ramiro Sandoval, Misha Shulman and David Willinger. Winners will receive one-year passes to TNC and a bottle of Moet and Chandon champagne. Attendees will be judged in such categories as “Most Trumped-Up,” “Most Vaped,” “Most Over the Rainbow,” “Most Whistle-Blown,” “Most Anti-Oxidant,” “Most Opioid,” “Most Organic,” “Most Climate Changed,” Most Impeached,” “Most Corrupt,” “Most Toxic,” “Most Faked News,” “Most Genital-Snatched” “Most Zan-Tacked.”

Theater for the New City is located at 155 First Avenue, at the corner of East Tenth Street. Reservations are strongly recommended. The TNC box office number is (212) 254-1109. Buy online at www.theaterforthenewcity.net.