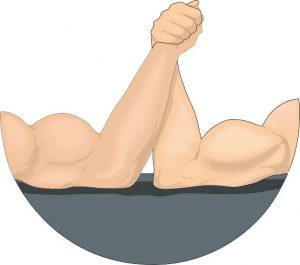 Flushing, New York April 4, 2018 The New York Arm Wrestling Association (NYAWA) announced today that the 40th Annual Anniversary of the Empire State Tournament of Champions (Official 2018 New York State Arm Wrestling Championships) will be held on Sunday, April 22, 2018, beginning at 1:00 p.m. The event is hosted by and held at Cheap Shots Sports Bar 149-05 Union Turnpike Flushing, Queens, NY 11367. Spectator’s admission is $5.00. Competition is open to the public and has no residency requirements. Entrance fees are $25 for amateurs, masters +43 and +55 years, $35 for pros, and $15.00 for all women. The proud sponsors are Ironmind.com (Captains of Crush Grippers), Cheap Shots Sports Bar & NY Arm Wrestling Association.

$3,000 in cash and prizes will be awarded, and over 100 men and women are expected to compete for the chance to be crowned New York State Strongest Arm. There are amateur, pros, masters 45+ and 55+ and women’s categories. Contestants should weigh-in and register between 9:30 A.M. and 12:50 P.M for the

Some of the city’s best arm wrestlers are expected to compete, among them, the winners of the prestigious 2017 NYC Big Apple Grapple International and previous Empire State Champions will return to defend their titles. Contestants and teams are expected to compete both locally from the five NYC Boroughs and Long Island and from as far away as Russia, Brazil and Turkey.